Less than three missions into the game and already I'm feeling that Deus Ex: Human Revolution (DEHR) and already I'm feeling that the game is like Gattaca on steroids. Don't get me wrong, the issue raised by both stories are not the same but then again, this whole argument about whether to let humans develop naturally or be "designed" as they wish just felt strangely familiar.

Of course, I'm still early at the beginning of the game, so I wouldn't comment much on the implication of the plot first, because I smelling that the entire debate is not so simple as whether to be augmented or not. And to be honest, when it comes to debates like these, I find it really hard to pick a side because both sides have their merits and cons. There's no clear cut lines.

Other than that, the game also somewhat reminds me of Dishonored in terms of gameplay. The emphasis, choice and consequences of choosing between a stealth gameplay versus a go in guns blazing style feels familiar too to what I experienced in Dishonored. For example, how my actions in the first mission affected how the characters around me commented on the incident ("Playing Gandhi, aren't you? Letting everyone go alive") and the news reports as well.

But then again, DEHR was released in 2011 while Dishonored in 2012 so I guess which direction the copying/inspiration went though I must say both games have their differences too. While Dishonored pretty much focused on revenge without much dialogues, DEHR allows you more leeway in exploring the city and so far, I've managed to clocked up 6 hours of gameplay with only around 2 main missions under my belt (been pretty much exploring, I admit).

So far so good, I would say, in regards to the game experience and all. I admit that I do miss shooting down every enemy indiscriminately like in any classic FPS games, but the stealth requirements of the game itself makes the game feel more realistic in a sense. Much better than only having more rats and a different final mission only, if you would pardon that Dishonored reference.

I've not yet got a full blow on how the consequence of my actions would turn out, but I have the feeling that your choices are not just limited to just stealth vs kill. In one mission for example, where a terrorist is holding a woman hostage, I had the option of letting him go with the hostage, killing him or trying to convince him to leave the hostage while he escapes (being the person who wants to please everyone, I chose the third). The same goes for other missions as well. The point of entry in the games are not just limited to 2 but varied, and you can try your hands at accomplishing the mission through various means (sneak, kill, hack, talk, explore).

Of course, being the nitpicker that I am, I do find that several parts of the game are severely lacking in terms of realism. While a cop would try to stop you if you hack a console in the police department in front of him, crawling into a vent in full view of three police officers inside the police department would not even raise an eyebrow ("Oh, you're with shades and weapons and stuff and you're checking out our vents? Cool, just go ahead while I continue to stare at the wall here"). If you manage to find loopholes like this, the game can get pretty easy, sadly.

Other than that, another thing that I noticed was that doors or pathways that were opened stayed open indefinitely. For example if I hacked a gate to an apartment, I can rest assured that the gate will forever remain open for me, even though I obviously don't come from there. No one bothers to close the door and stuff because really, who cares? They're too busy starting at the walls anyway.

I just thought it would be great if you actually have to be mindful to close the door or locked the safe box back every time you hacked it just so it would not raise any suspicion. That would certainly make you feel more like Tom Cruise in the movies, wouldn't it? Rather than, "Oh, there's no need to bother about the opened door to the restricted area that is supposed to be locked actually, cause you know, maybe the door magically opened by itself".

But I'm nitpicking, really, the game is still awesome with it.

Aside from the petty issues itself, I find the game to be overly amazing and addictive. The cutscenes are to die for and the games also offer a sort of dialogue choice similar to what one can find in the Mass Effect franchise. One thing that stood out to me was the mind manipulation perk, where you can detect someone's personality through this upgrade and apply the appropriate persuasion tactic. 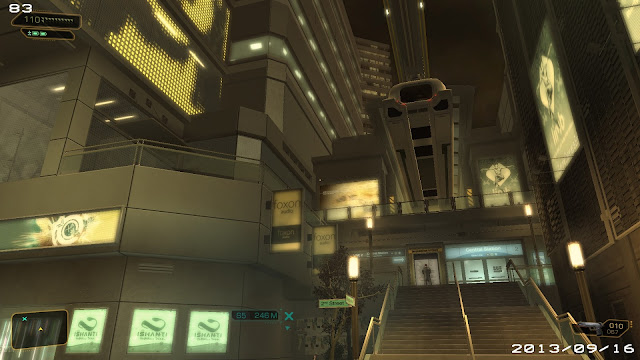 All in all, the game is enjoyable. So much so that I'm refraining myself from Googling any game related information (except for one computer's password that I could just not break) in case I spoil anything unnecessarily. And when a game does that to me, it's usually good.