Lets All Be Nude

A few months back, I read about some guys blaming rape on the woman because of the revealing clothes they wear and thought that it was stupid.

But then I read about how some feminist who said that it's women's choice to wear how revealing they want and it's the men's fault for wanting to rape them in the first place because true men should be able to control themselves. I felt that it was stupid too.

And today, I saw a Youtube clip shared by my Facebook friends with the title "The Godly Truth About Bikini's - FINALLY Someone Gets It!" and felt that although the speaker raised pretty valid arguments, I felt that something was missing too, and it's just not about the methods and causation that she used. 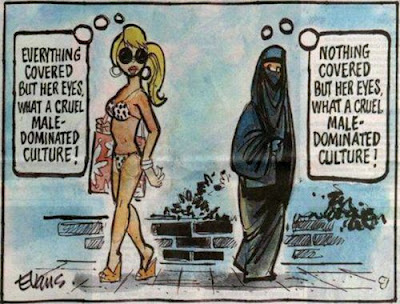 I don't know why, but this whole idea of modesty, what's right and what's wrong feels like something that we shouldn't even have been bothered about in the first place. On one hand we have the moralistic camp who is concerned about women showing too much skin and on the other we have the feminists camp who is concerned about the moralistic camp's obsession with them showing their skin.

For starters, I have to clarify that I don't agree with some arguments put forward by both camps in an equal manner. But to avoid this argument from going all over the place, I am going to state what I don't like in general about the arguments of both the moralists and feminists first, before elaborating on the said video and finally ending with what I think is the ideal solution, though it is more of a thought experiment than a viable solution itself.

For the moralists, I disagree with their idea that women should be expected to keep in line and be "modest", which its definition itself is subjective depending on what faith you have. Modesty itself is a construct of society as some would argue, formed on the basis of an unequal patriarchal society. The idea that you should "cover" yourself is lame, because I remember watching a documentary once upon a time ago when I was young about native African tribes and noticed that the women there does not cover their breasts and there was no problem with it. If one were to argue that it is innate, how come a tribe who is supposed to be more "natural" than us do not display the same idea of modesty? Clearly the idea of modesty itself is a product of the evolution of civilization.


Furthermore, for "modesty" to not be an arbitrary product of humans, it must be displayed equally across two genders. I find it unfair how us men are not expected to cover anything except out crotches while women cannot bare their legs, hands, necks etc. For the argument for modesty to be valid, men should be equally chastised too if we choose to bare our legs and hands for example. And with that, I would also strongly disagree with the idea of some men that should a woman choose to bare her skin, it's her fault for getting raped because she provoked the man. If every criminal were to use that logic (I killed the person because he looked evil), we wouldn't need the law anymore.

On the other hand, I would also disagree with some of the extreme beliefs taken up by the feminists too. A lot of feminists solely blame the men for cases for rape, saying that no matter how much skin they bare, if a rape occurs, it is entirely the men's fault for not being able to control themselves. While I think that the idea of modesty is artificial, we cannot deny its effect on our society. Thousands of years of evolution have resulted in the inequality of sexual expression between men and women and that includes the notion that men is more aggressive and sexually driven.

To fall back on the example of murder, when a person decides to kill someone out of heat of the moment for example, a lot of factors have to be considered and the amount of provocation is one of them. Lets just say Guy A murdered B in two different situations, in the first one B actually killed A's son beforehand while in the second situation B only stepped on A's shoes. I'm sure you would sympathize with A more in the first situation because he was provoked enough to lose control. It doesn't matter what values or how much patience you have. When you see your son get killed, you are bound to be extremely affected.

The same applies to rape. A lot of factors need to be considered before you can simply point the blame to solely one party. To be honest, there's never one party to be blamed entirely, except if there's a psychopath involved. To blatantly flaunt your skin without a care of the cultural norms and then expecting men to keep their line is like the first situation in the murder example. It's okay if you walk with shorts in the US but if you do that in the Middle East countries where they have never seen a woman without a Hijab before, well good luck. Because no matter what you feel about equality and such, due to the differences in culture, you can be considered as indirectly provoking them. It's not anyone's fault entirely, it's just culture. But just because the culture differences exist doesn't make it right. And that's where my next rant comes in.

Jessica Ray in her talk mentioned about a study examining the effects of looking at sexy women on men, such as having a part of the brain light up while the other shuts down and the association with words. While I do find the way of how she drew the conclusion between words association and being treated as objects as a little bit far fetched, for the sake of the argument, lets assume that it is true. After all when I see sexy women, I do feel a little bit different.

The only thing that I find missing is that how she only mentioned that the study was done on men and not women and I would love to see whether women themselves will show the same reaction, that they would view men equally as objects when aroused. Sadly it was not mentioned. For the modesty argument to stand, men must be shown to have a stronger sex drive than women, that if a man who is looking at a naked woman as compared to a woman looking at a naked man, the man would feel more impulsive (or hornier) with everything else equal. If a man is shown to be more impulsive (and hornier) than a woman, then the more reason a woman should "cover up".

I searched the internet for answers. To see whether men and women are innately different when it comes to sex drive and it turns out the answers can be quite mixed. There are those who say women can be as equal if not more than men (link here) but there are those who found that men, in support of popular belief, are in fact higher in sex drive (link here), which pretty much answers nothing about the confusion that I was having. And we're back in square one.

I was thinking that unless we can go back to a time when everything else is equal, without the differences in stereotypes and gender roles, and start again, we can really never know. What we have now is a product of thousands of years of human evolution and undoubtedly things might changed in ways that we don't even know. And at the end of the day, not the moralists nor the feminists seem any closer to uncovering the truth. So I guess this whole modesty battle is nothing but a battle to justify our own ego and our need to be right. And surprisingly, what I think as an answer fell exactly back to faith and religion.

Remember what I said about the African native tribes? Well, in his book "Searching for God Knows What", Donald Miller argued about how the entire argument about modesty is flawed in the first place because the whole idea about shame is not even supposed to be there. He mentioned about how Adam and Eve started off wearing nothing and they were fine with what they have. No problems no arguments about covering anything. Only after eating the fruit were they aware that if they don't cover that it's shameful and I guess from there onwards the whole idea about clothing and modesty sprang up.

You see, I believe that modesty is nothing but a human concept created entirely by humans to protect something that doesn't exist in the first place, which in turn created myths like who is having a stronger sexual drive and what not.

Imagine that we have a society where the children are brought up without wearing any clothes at all (human skin is the most bacteria resistant piece of material that you'll find, trust me). They grow up seeing each other nude all the while without the idea of what a guy should wear and what a girl should wear. Do you think that they would have the same idea of modesty as we all? Certainly not. I don't know how that society would look like but I'm certain that the guys will make less fuss about woman covering up or making them horny because they are so used to it in the first place.

Of course this may sound blasphemous to some, but the idea of covering something up in the first place implies that there's something to be seek, something to be found and with us being humans, curiosity is part of our nature. So why not just bare everything and leave nothing to imagination? Or if you really want to cover, at least make it in such a way that men and women are subjected to the same rules. If you want women to wear one piece swimming costume, men should too. Or else it would just imply a gender inequality.

Maybe it's time to regress and go back to the simple times, like the native tribes.