Dinner at The Rajah Inn Restaurant

Tucked in a small corner on the second floor of Tiong Bahru Plaza, you would be forgiven for thinking that the Rajah Inn Restaurant is just another "mall restaurant". Air-conditioned with generic and okay food that people go to after a day of shopping or hanging out at the mall. 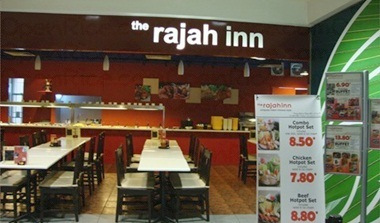 But faced with a craving of steamboat and having spotted people having small steaming pots burning next to them the first time I passed by the restaurant while looking for something to eat, I eventually decided to have dinner at the place. And I must say, sometimes a dash of spontaneity can result in pretty interesting outcomes. Like the old saying goes, never judge a restaurant by its look.

While the restaurant has the usual steamboat buffet, what caught my attention that they had an ala-carte buffet too. And by ala-carte I mean the usual food that you get from zhi char like sambal kangkung, fried chicken wings, signature beancurd, black pepper sotong, you get the gist. So rather than ordering just one plate of dish itself, you can have an endless supply of it just for one price. In addition to the steamboat itself. Meaning that it's like a 2-in-1 type of restaurant.

The ala-carte food itself was also surprisingly good and comparable to some of the good zhi char restaurants out there. We tried the sambal kangkung, the signature beancurd, fried chicken balls, crispy wings and egg tofu and thought all of them were equally good. However, due to our preoccupation with the steamboat and meat, we were not able to try most of the items that were on the menu.

As for the steamboat, with the exception that there's no lamb meat, there's nothing really special about the steamboat itself. It's like any other steamboat that you can get anywhere, not entirely good nor bad, though it is worth noting that my dinner partner complained about the tom yam soup being too sweet, which I thought was okay.

I think the main attraction itself is the buffet for the zhi char itself and the dessert choice. Their chocolate ice-cream had chocolate chips inside it and there's even a chocolate fondue. Not to mention free flow ice lemon tea. For the price of 20+ dollars. Which is quite cheap if you can eat a lot. Guess that explains why there's so many people at the restaurant.

The menu itself is not limited to only buffet, as there're different packages for you to choose from if you don't feel like spending a lot of money for the buffet. So more choices. As for me, I think I'll definitely visit the place again.