Lust is a part of love. Really? Was browsing through NUS Confessions today and came across two posts that really struck me:

Ladies and gentlemen, welcome to the age where not having sex with your boyfriend/girlfriend is now officially considered as not normal and weird.

Reading those made me feel kinda old, to be honest. Because I happened to be perhaps the last few remaining guys who thinks that sex should be left until marriage. And with it comes the conservative thinking that if you could have sex freely with people other than your spouse, then what's the point of marrying anyway? I personally believed that if you could only have sex with one person, then that would inevitably make that person more special to you in a way and that sex somehow bonds two people closer together. Once you could sleep around freely, sex loses its meaning in marriage and it could perhaps make someone less likely to be faithful and that would make it more likely for someone to commit adultery and inevitably leads to divorce.

Of course, that's sound a bit far fetched but that's how I would like to view it. I don't deny the fact that my Christian background somehow influenced my thinking but I thought that saving my first and giving it only to my wife would be the best gift that I could ever give her. No one else's but yours, baby.

But then again, I realized that keeping on to all these principles are really pointless in the end. I mean why bother keeping it if everyone else is doing it? At the end of the day, no one is going to measure you by your principles and reward you for it. No one is going to walk up to you and say, "Not bad, Luke, on what you did there. Here's a medal for you". No one. At the end of the day, principles are only an illusion to give you a feel good feeling that makes you think that you're better than the rest but when in fact it doesn't make a difference whether you've slept with one person, ten people or hundred people before. No one is going to know. And ultimately, no one has a clue how your sexual promiscuity before marriage could affect your marriage quality.

One could draw correlations between the past and present, suggesting that marriages in the past tend to last longer without divorce is correlated with the number of sex partners one has, but then again, correlation does not mean causation. And besides societal norms and taboo changes with time. It was once considered a taboo to hold hands but look at where are we know. Perhaps in the future, having sex could be viewed as the act of holding hands today and the definition of marriage could be changed completely, who knows? Already we are seeing the emergence of new types of families, the single parent family, the same gender parent family so there's really no knowing where are we headed next. Perhaps sex and having a baby outside of wedlock may have altogether a different meaning, maybe the term of marriage would be abolished altogether in the future. I don't know.

The thing is, I feel stupid of withholding it so many times thinking that perhaps I am making a difference when it doesn't really matters. In the end, our values are subjective, especially when it comes to things like sex and even I choose to stick to it, there's no telling I could ask my son or daughter to stick to it in the future. The thing is unless society reverts its values, I have no choice but to revise my own values. 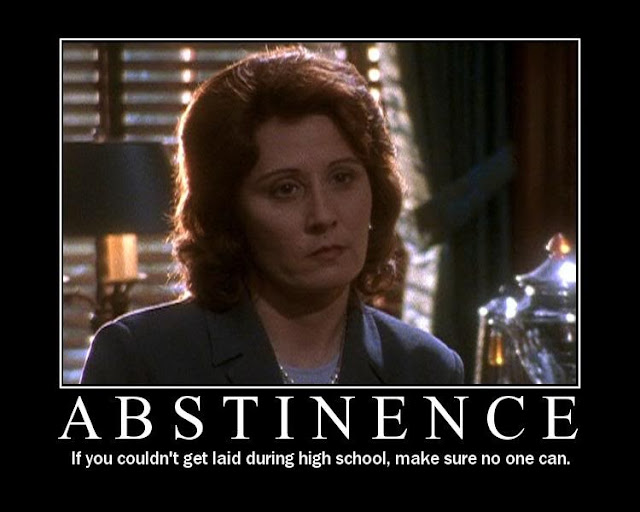 To be honest, other than the religiously inclined, there are hardly anyone else preaching about abstinence today. The more prevalent message is about wearing a condom instead of waiting for the special day and I guess that says a lot about how useless the mainstream people think abstinence is. And when it comes to marriage, unless you can find the same yolk as you, there's very little chance your partner may share the same sentiments as you and even if you do find one, as evident from the confession up there, you can never really know.

My point is: Why bother making yourself suffer when everyone else is having fun and not giving a damn about it and at the end of the day, the only thing that you'll receive is a stupid self pat on the back? Of course you may argue that your religion may say it  otherwise, but there has not really been any conclusive proof of the benefits of abstaining other than some form of speculation about the benefits right? It's just isn't worth it, if you look at the bigger picture.

Of course, that doesn't mean that I would immediately go to Geylang or anything, it's pretty hard to change one's values after all but I am just really intrigued by the whole concept of abstinence itself and what difference does it really make. I am not aware if there's any research looking into this (though I would suspect that finding a sample size of abstinent teens might be quite difficult) and I am not aware if there's anything in religious texts that touches on abstinence too other than the part where Jesus said you can have no one else but your husband, until the day that you die, which I agree to the max, to be honest, but that's another story for another day.

Maybe I could do a Psychology research on this, if I could have the budget and sample size. And if I would have the chance to study Masters. As for now, I guess I could file this topic under the folder of "Instances Where I Don't Want To Live On This Planet Anymore".