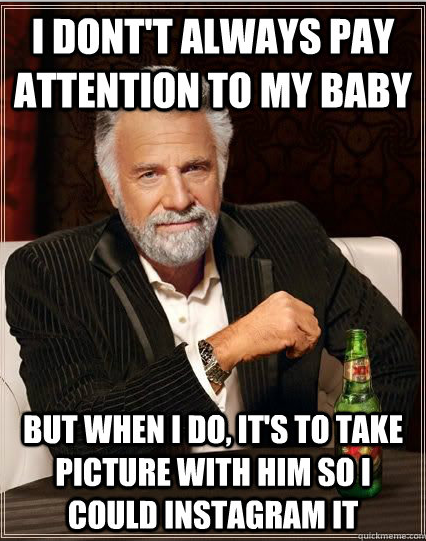 I was standing in the train today when I noticed a baby staring at me. He or she (for the sake of simplicity lets call it he) was drinking from a milk bottle while his mother was holding the bottle with one hand. Not long after, I think she must have gotten tired because she asked her husband to hold the bottle for the baby.

The interesting thing is that the whole reason why they were holding the milk bottle with one hand was because their other hand was busy poking their iPhone and Samsung. The dad was playing candy crush while the mummy was ironically, posting pictures of her together with the baby to Instagram. All the while the baby was busy staring into empty space with only the bottle as his best friend.

After the baby finished, the father proceeded to keep the bottle and returned to his candy crush game, while the mummy was busy adding filters and effects to the photos of her with the baby. The baby on the other hand, was left alone to do whatever that she wanted to do. She kept looking around, one woman nearby smiled to her while making silly faces, but when she alighted at the next stop, the baby was just there lying in the pram alone without anyone to care about her.

And we're wondering why kids this are getting from bad to worse.