Wages, how much is enough?

In lack of a better thing to blog about tonight, and because of stupid phone decided to not let me call a girl that I have wanted, I decided to go with a my dear senior Joshua's suggestion to blog about an article that is trending according to him, titled "Do Singaporean Workers Deserve Their Wages", which can be found at http://business.asiaone.com/news/career/do-sporean-workers-deserve-their-wages.

I did not wanted to blog about it at first for two reasons, one, because I'm not educated under the Singapore system and two, I'm not a boss so I'm not exactly qualified to comment about it, as I'm pretty much an outsider to the issue. However, since I have nothing much to blog about tonight, I think I might write about it,  but solely from an outsiders perspective, so take it with a pinch of salt, as I am no expert, merely a unemployed recent psychology graduate. 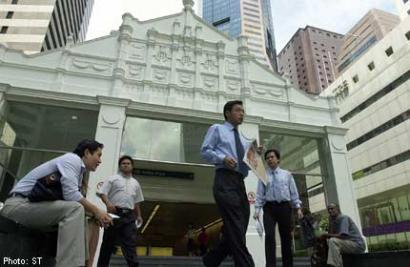 I think that the first thing to say is that while it is tempting to jump into the bandwagon of popular opinions and agree with what the author said about how Singaporean workers are uncritical, unskillful and demanding at the same time, I would take an opposing stand and argue for the Singaporean workers instead. I would suggest instead that perhaps the difference seen among local workers and foreigners is not because the lack of skill, but rather an unfair comparison is being used.

I do not know what's the exact work attitude of the Germans or the Swiss back in their own country, but I'm assuming that the author is basing his arguments of how Singaporean workers differ from other countries merely by looking at the local scene (complaints from bosses) and comparing those with preconceived ideas that he have about German and Swiss workers. If that's the case, I would say that it's not a fair comparison unless you really step into the said country and experience the working culture for yourself, which means paying a visit to German and Switzerland and not merely plucking them off to compare, because you can never know how the situation is like in another country until you experience it yourself.

Secondly, I would say that the difference that you see in Singapore is not because of absolute differences, that the local education system is not as good as other countries, but merely because of immigration patterns. It's a bit tough for me to put it in words, but I'll try.

You see, Singapore is a highly globalized country, with a heavy influx and outflow of people and talent and the main reason why local bosses are finding that the local Singaporeans cannot compete with foreigners is merely due to the fact that the more successful Singaporeans, the ones with the skills and attitude, would instead prefer to migrate to better countries or seek better opportunities elsewhere by going to overseas universities and such, leaving those who are not as good to compete with the foreigners who are coming in, who incidentally happen to be the cream de la creme of their country, who are coming to Singapore in search of better opportunities, just like how the top Singaporeans are going overseas.

I do not know what's the exact pattern of the immigration flow is like, but this is one of my theories on why local bosses may find local Singaporeans not being able to compete with foreigners. Not because of absolute skill difference but rather because Singapore is a highly globalized and unique country.

Of course, this is just a theory. There's also other questions like "How much wage is truly enough?" and how much wage is actually increasing for the supposingly more "skilled" counterparts. Also not to mention whether the costs of living are increasing there as well. There's too many variables to take into account but from what I experienced, I would say that the argument that Singaporean workers are not as skilled as other country's workers is not exactly a strong one. The author of the article clearly had some preconceived notions of how Singapore politics, education and workforce is going and clearly wrote the article in the direction of his agenda.

Using wage as the comparison tool may not be sufficient, as well as comparing Singapore with a country like Switzerland which has a much longer history and has never entered into any war since 1815, so it's not exactly bad news for Singaporean workers. After all, during my study here, mosts Singaporean that I've encountered has more drive and energy that on my opinion borders on workaholism, so I don't think there's any problem on attitude nor skills.

My take? If you really want to make a case against Singaporean workers, more study is definitely needed, not just based on interviews with a few bosses and random numbers that you deem as convincing yardsticks.  But alas, time is not on my side and as I have to wake up early tomorrow, blogging doesn't earn me a living, I have to put a stop on this post here. But I hope it's more than enough to put some ray of hope back, instead of the despairing picture painted by the writer in the article. Chiaoz.