I have finally finished my first playthrough of Bioshock Infinite, in less than one week, that I must say, and for all the misgivings or bad impressions that I had for that game, it all came crashing down once I've got to the ending. Because out of all the game that I've played, I've gotta admit that Bioshock Infinite has one of the best endings ever where so much thought has been given to tie events of the game together, even the two predecessors before it, into one elegant and superb ending of sorts.

For all the other themes explored by the game, about the American dream, the racism and religious extremism, I think that the main one that they dabbled in, the existence of infinite universes and the relationship between them (hence the name Bioshock Infinite) is almost done to perfection. To be honest, I think the ending itself and the elaborate thought put into it dulls all of the other features of the game, which to their defense is already good, it's just that the ending itself is THAT good.

The first thing that I did after the game was to search for the ending and the first reaction that I got after reading the explanation to the ending and to the whole game itself was "Wow". The entire ending itself is mindblowing, how the various things that you see from the start of the game to the end relate to your relationship with Elizabeth and the ongoing conflict between you and Columbia, in fact with the fate other universes, is nothing short of elegant and mindblowing. I wouldn't go in too much into the explanation though, as many others who have finished the game before me have already done so, I'm just here to marvel at the ingenuity and originality that the games developers have put through. 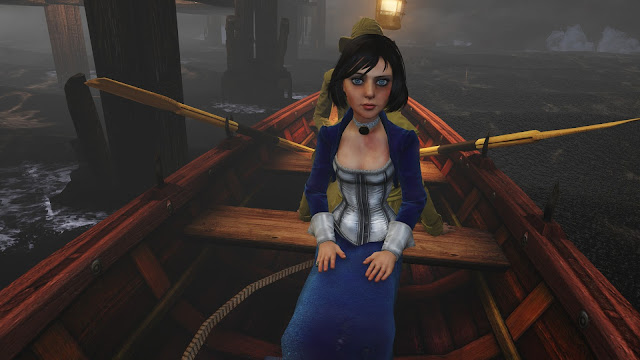 In essence, the game plays on the multiverse theory, that aside from the reality that we live in, there are an infinite possibilities of different universes existing, each with different versions of us, in different stories. To put it into the context of BI (Bioshock Infinite), our own character, Booker DeWitt and Zachary Comstock, the antagonist, is one and the same person, only that one of our minor decision has propelled us drastically different paths, one of anarchy and the other of gambling addiction and hopelessness.

It is through these two different universes where the story of BI is based on, where the evil side of us, Comstock, after enlisting the help of Rosalind Lutece and realizing the potential of the tears, decides to kidnap Anna (Elizabeth) from the addict version of us, Booker (the protagonist) to fulfill his destiny as he is sterile due to the exposure to Lutece's machine, which can see through time and space. 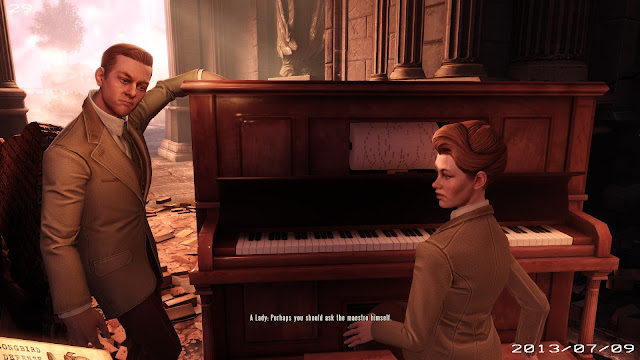 To put it into a narrative view, Booker in an alternate universe, after getting baptized and renaming himself as Comstock, meets with Rosalind Lutece, a brilliant scientist who helps him design and build Columbia. Later, she invents a machine that lets her peer through space and time and looking through it Comstock was able to see into the future, thus seemingly giving him the powers of "predicting" the future. His lieutenant, Fink, also uses the machine to steal technological information, thus creating technological marvels such as vigour and the Songbird. Rosalind Lutece was also able to bring another version of herself, Robert, who is in fact a male version of herself from another universe (implying that there's a possibility that a female Booker exist too) into the same universe as hers.

However, exposure to the device has left Comstock sterile and unable to bear a child, in addition to aging rapidly and not wanting to relinquish his power, he sought to bring a child of his from other universe where he had a child and finally settling on Booker DeWitt's timeline and Anna, maybe because it's the most suitable universe of all (due to the gambling problem), and the possibility might exist where there are different universes where Booker has different endings like more children or better adapted. So in theory I guess you could say that out of the infinite universes that are out there, only these two are set to interact. 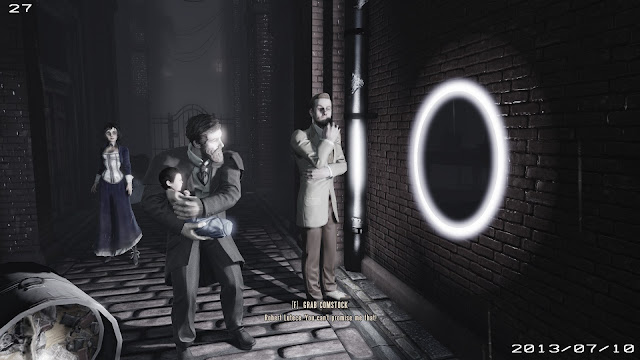 As time passes though, the Luteces realize that by bringing Anna/Elizabeth to Comstock, they created a possibility of Columbia attacking New York (DeWitt's vision of New York being attacked may be visions from the future in another universe where he didn't save Elizabeth) and to right their wrong, they attempted to bring Dewitt to save Elizabeth, after having their earlier plans foiled by Fink's sabotage.

The plan is not as easy as it sounds, unfortunately, and prior to your entrance in the game, more than 120 other Booker Dewitts have failed in their mission, evident from the chalkboard early in the game, meaning that the Luteces have tried again and again to bring Dewitt in from other universes, specifically universes where his daughter is taken away (lets call this Universe A) to try and rescue Elizabeth, in hopes that once a single Elizabeth is rescued from a single universe, she would have the power to stop the events of Universe C (where Comstock successfully grooms Elizabeth to be his successor to wreak havoc tot the world below). 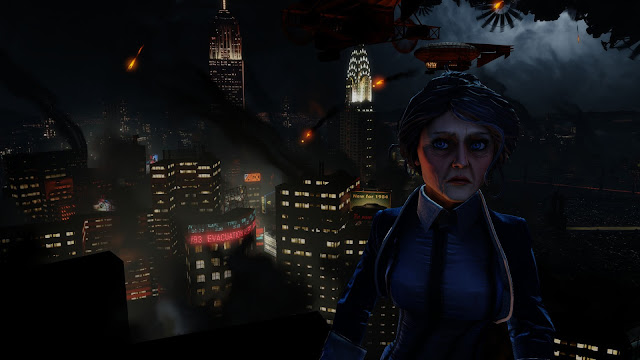 Up to this point, you can say that there's two timelines operating simultaneously, one where the Luteces are constantly bring Dewitts to try and alter destiny, and the other where all the other timelines are moving simultaneously, following the normal rules of timelines and universes, if there's any. In a way, I would theorized that the Luteces themselves have transcended timelines and is in a way all merged into one copy, without alternate versions of themselves, though there's no explanation on how or why that happened (Edit: from Fink's accident), or how their powers cannot be compared to Elizabeth's, and with them being so powerful as they are, why do they need help from Booker Dewitt. 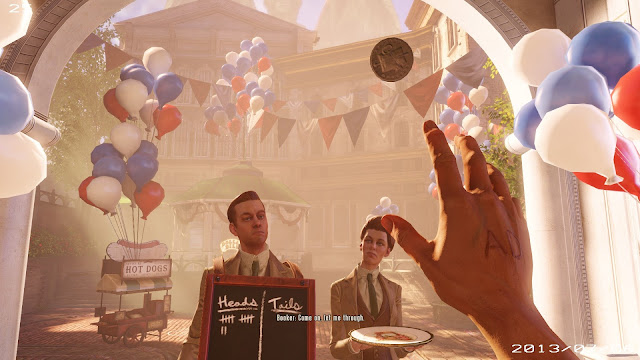 Of course, eventually your character does succeed in rescuing Elizabeth and destroying the siphon, thus unlocking the full potential of her power, which she uses to explain to you the origin of the story and finally piecing everything together, that you Booker Dewitt from the infinite universes of A, is brought in to fight yourself, Comstock, in the infinite universes of C.

In the end, in order to terminate the existence of the universes of C, both across different timelines and different versions of it, you choose to be drowned, thus putting an end (hopefully) to all the Comstock universes that existed, have existed and will exist. Of course, with so many other universes out there, you could argue that perhaps there are different universes where Booker and Comstock took on very different paths or end up differently, maybe in some Booker has 3 kids instead of one and is a successful businessman but with the constant and variable idea, one could say that if Booker becomes Comstock and meets Rosalind Lutece, the constant is always with him ending up as an anarchist.

This theory, where the conflict is solely between two types of universe seems appealing to me but it still couldn't explain the other Elizabeths and Bookers we saw at the lighthouses and why they didn't appear at the end of the scene or rather are all of the Bookers we saw condensed into one and drowned, or if all the other Bookers are drowned by their own Elizabeths to shut down other variants of the C Universe. 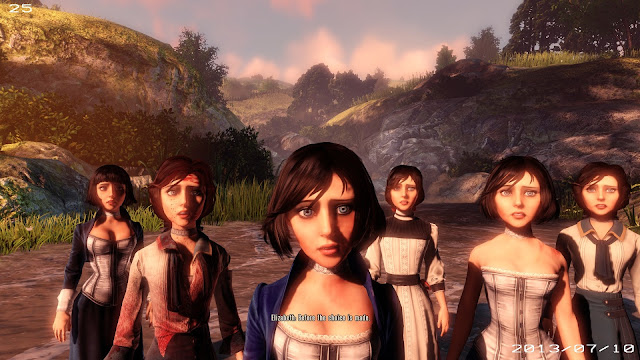 We can never know the true extent of effects from drowning Booker, but we have to take faith in Elizabeth that it would have done the job. The C Universe is shut down, thus preventing any possibilities of Columbia ever existing. Mission accomplished.

The after credits scene, where Booker wakes up to his office and calls out for Anna, could be a Booker from the A Universe, waking up to perhaps having memories from the drowned Booker implanted into him, but that's my theory. There's a lot of questions left to be asked on the finer mechanics of the transdimensional and time travel, but all in all, I think it's one of the most amazing storyline ever incorporated into a game. The one and only time where I last saw such a heated discussion over a game's ending was in Mass Effect 3, but Bioshock Infinite definitely surpassed it by adding in elements of time and dimensional travel.

I actually broadcasted the game while I played, and you can check out my initial reaction as I played through the ending for the first time without any idea of what's happening in the first place at:

Bioshock Infinite is definitely an awesome game, even with its ending alone. The game's story is one of the best I've played so far, how it really keep you in suspense til the very end of the game and I think it would be a very long time before any other game can manage to amaze with a twist as elegant and as superb as Bioshock Infinite. Hats off to the storyline writers of the game.