Leave it to Zack Snyder, the director behind The 300 and Watchmen, and Christopher Nolan to make Superman awesome again on screen.

After much delay and anticipation, I finally had the chance to catch the new Superman movie that was released just recently. I've been wanting to watch this movie ever since I saw the trailer and I was really eager to see how Zack Snyder and Christopher Nolan will reboot the entire series.

Wanting to watch a newly released movie in Ipoh wasn't easy though. There's only so many 3 established cinemas in town, one GSC and two TGVs and they were full to the brim. So we decided to go with the unconventional, visiting a relatively unknown cinema which is not located in any shopping malls. Ipohreans (what do you call people coming from Ipoh anyway) would know this cinema as the Lotus Five Star cinema, located in a small and unimpressive building near House, Padang Ipoh and Yik Foong.


It was the first time that I was stepping into the cinema though, despite passing it numerous times and hearing about it from friends, because I was never too sure of what to expect from it and I never had the need to visit it. Only during yesterday when we were truly desperate that we decided to patronize the cinema and to be honest, I was quite impressed with the overall quality of the cinema, just that you need to remember to bring your jackets.Or some winter clothing.


Okay, back to the main topic of the day, the movie itself.

I think right from the start many people were wondering how Zack Snyder is going to pull off this reboot of the movie because after all, it is not easy to make a Superman movie. The previous one was fulled with criticisms and 2 out of 3 Superman movies done by Christopher Reeves, the iconic Superman whom we all knew, did not achieve as much success as the first one. Superman's powers itself makes it difficult to keep the movie realistic and yet epic at the same time.

Amazingly, Man of Steel was able to deliver a movie which is balanced and yet enjoyable at the same time. While it is nowhere near the dark and serious tone of Nolan's Dark Knight trilogies, it manages to explore the human side of Superman without sacrificing too much of his Krypton side. I love how Snyder focuses on the familial themes in this movie, choosing to use flashbacks to string together a past for Clark Kent and to provide a sufficient back story for him without dragging it for too long.

It also doesn't linger too long on the soapy sad stories surrounding Superman's past, choosing to immediately  jump into action once the premise has been established. The action sequences itself were enjoyable to watch although the movie may have overplayed it a little on the scale of the battles because it's Superman and is nowhere as gory as Snyder's previous movies, namely 300 and Watchmen, perhaps because they need to tone it down for the general audience but I felt it is not as realistic as it should have been. Because when you're shattering buildings and destroying landscapes, it's kinda funny if all the passerbys emerge unscathed from the battle. 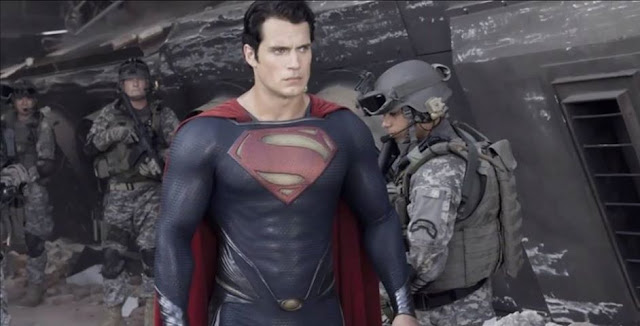 But nevertheless, I liked the overall tone of the movie. It sets the tone of Superman's background at the start of the movie, brings you along the path of self-discovery of Superman and his conflict of identity as he's growing up, throws you into the heart of conflict as soon as you say, "Ah, now I understand" and lays the foundation of his future life at the end of the movie. There's no one dull moment in the movie as it is able to portray the different settings adequately and to be honest, I just love Snyder's cinematography.

Not only that, I also loved how the film tries to focus on the struggles of the normal people around Superman too, while not going in depth into their character development, it was able to let the audience know enough of their motives and personality for us to feel them and to identify with them. This film is as much a Superman film as it is a humanity coming to terms with a superhero amongst them, showing how instead of letting Superman do all the job, it was both the humans and Superman's fight and the film managed to juggle it convincingly.

The films does has minor flaws in the details here and there but in overall, it's one of the best Superman films I have ever seen, choosing to focus on the qualities that is distinctively Superman's. A definite must watch.