Despite calling myself a seasoned gamer, and wanting to be one of the first popular gamer blogger + broadcaster in Singapore, I have to admit that there are a lot of popular classic games that I did not touch before. Games like Final Fantasy or Zelda for example, because I did not have the time nor money back then to be able to experience these games. Another one of the classic games that I didn't get a chance to try was Tom Clancy's FPS series, mainly because I used to think that it was not really great back then.

I heard that Ghost Recon was a great game, and despite missing it out when it was first released, I had the chance to experience it today when a friend told me that they are releasing a free online multiplayer version of the game for open beta. Since I'm a fan of FPS games and since the trailer looked great too, I decided to download it and give it a try to see how the game is like. 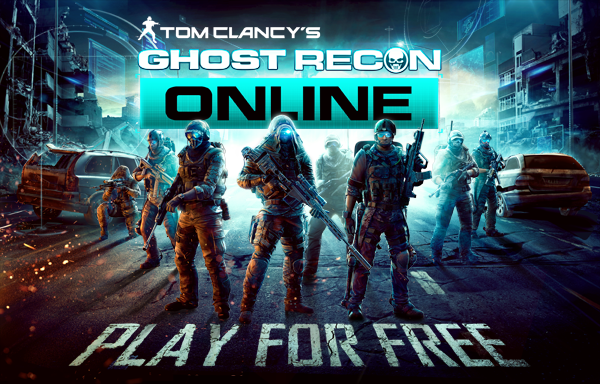 First thing first. I have no idea how the original single player version of the game looked like, but from my first 50 minutes in the game, what I can say is that at its core, the game is no different from the free shooter games that I've played before like Blackshot or Sudden Attack, where you search for matches once you're in game and basically you need to use cash in order to use better guns or armor in game. That's the core of the game. If you have the cash, you'll have an easier time owning, which means that while you're still using the default gun given by the game, you'll have someone already wielding a crazy gun just because they can buy it.

With that being said however, the game does try to balance it by adding level restrictions to the guns being used, which I think it's a good effort to not make us non-cash paying players be like cow fodder and ultimately, they have to make money too so I'm not blaming them.

Cash mechanics aside, the game does try to add its own flavor to the MMO shooter genre through a few different features. For starters, there's three different classes (Assault, Recon and Specialist) for you to choose from when in game. Each class comes with their own unique abilities (one active and one passive) and look, which you can choose depending on your play style. The active powers kinda reminds me of Borderlands, because you have to tap F to use them, and for each job, there's 2 active power for you to choose from, making it 6 active powers in total. The same applies to the passive abilities.

While the different abilities are aimed to provide a more tactical approach to the game rather than just merely shooting, I find that the immensely long cooldown time for powers (maybe it's just only at low levels) kinda defeats the purpose. Not to forget that in staying true to the core of the game, more powerful variants of your power can be unlocked at higher levels using cash.

However, the concept of class system itself is not entirely new though. In Planetside 2 itself you have tons of classes to choose from in game so this feature isn't entirely groundbreaking. It's just how you incorporate the abilities in game that is interesting, as they can be paired up with various tactics in game to change the dynamics of the entire gameplay itself.

Perhaps the attractive feature in the game itself, in my opinion, is how you cannot blindly rush into a battle with guns blazing or risk getting creamed like no tomorrow, true to Tom Clancy's style of gameplay. One has to duck from cover to cover and progress slowly to the objective or try to flank any enemies in order to gain advantage in match. It's one of the rare few games where you see players actually going to prone in game because that's the only way you would not get killed in less than 5 seconds.

The game is in a third shooter perspective though, which is needed in order for the taking cover mechanics to work (like in Mass Effect 2 and 3), and you'll only switch to first person view while aiming down your sights.

All in all, I wouldn't say that the game is revolutionary in a way, because you can find games with similar gameplay out there and it's very cash based so non-cash players might find it a little bit frustrating at the start of the game. That being said however, the game still offers quite a decent amount of fun with the class system skills, the high amount of tactics needed and also the ability to customize your loadout (weapons upgrades + skills), provided you're not the impulsive type of gamer who loves to rush headlong into conflict.

Definitely worth trying out, because it's free after all and it's from Tom Clancy's series, but just don't put too much hope in it. I made a video from my first 50 minutes of gameplay in Twitch, so if you want to see how the game is like before downloading it you can head to http://www.twitch.tv/doriyakiz/c/2330285 just to see how's the gameplay is like.