Be extra careful the next time you're using water from a pipe for more than 5 minutes because you might just end up with a seizure and break into an aerobic dance routine. Or at least that's what the Public Utilities Board (PUB) is trying to tell us though their latest water conservation campaign video, Water Wally Shower Dance Music Video (embedded below).

In what seems to be a genuine effort to come up with an entertaining video to appeal to the young, it seems that somehow the producers behind the video did not actually consult the young before embarking on this video. The end results seem more like an aerobic dance instructional video rather than a music video, with lines actually asking to to move your limbs ("To the legs! Ah... feel the legs" 2:35) and having the actors/actresses in the clip perform dance moves that you would normally see in a kindergarten concert. 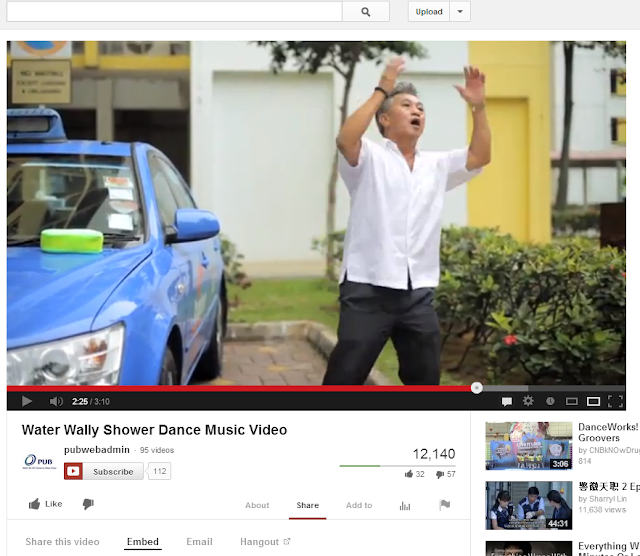 I'm thinking that perhaps they simplified the dance moves to accommodate the different people who are starring in the video but to be honest, I'm think that there are many more other ways to include everyone rather than downright dumbing down the entire music video which makes it almost to painful to watch.

One cannot help but wonder who's brilliant idea was it to give the go ahead to the video, but judging from the negative comments that have already started to pour in, heads will definitely roll.

One thing's for sure though, like all the videos that are so bad until it makes you laugh previously, think Rebecca Black and Steven Lim, this video is definitely going viral. My news feed in Facebook is starting to be filled with people sharing this video and the number is definitely going to rise. But looking at how the video is from a government agency though, I would predict that they will take down the video soon enough to not generate any more embarrassment so you might want to download it or watch it soon before it gets taken down. And despite how bad it is, I can't help but laugh after watching this.

Edit: There's already a parody up featuring the Water Wally Video, but substituting the song for Para Para Sakura and I must say the song does fit in quite perfectly. Link: http://youtu.be/ULbyIrEt9o4