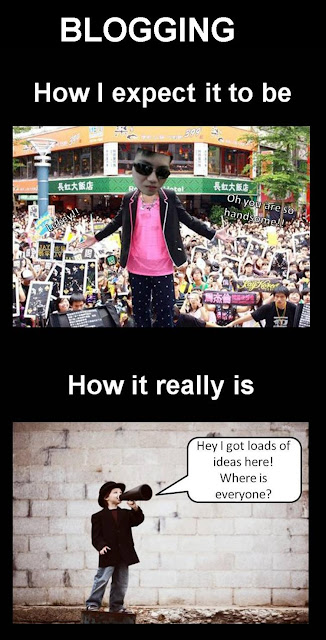 Somehow I forgot the reason why I wanted to do this comparison strip already. I think maybe it's because I've been looking at other more popular Singaporean blogs and wondering how come people are paying so much more attention to their blog when our writing styles don't differ much? I mean their grammar mistakes are sometimes even worst than me and yet their site statistics are so much higher with more paid advertisements and sponsors and event invites than me.

Yes, I know I tend to compare a lot but the act of comparing itself lets us know what are our weaknesses sometimes and gives us ideas to improve on. I mean you don't see me complaining about Xiaxue for example because she sincerely has some original ideas and she knows how to string them together and get you reading for the rest of the post, no matter if you agree with her viewpoints or not. And most of the time, she can dish out some pretty interesting arguments, as controversial as they might be, and get you to side with her. Not many people can achieve that, to be honest.

My only problems are with those whom on the outside, has tons of followers and keeps winning stuff but when you actually go to their blog, you find it filled with nothing but advertorials, event coverage posts filled with one liner photos and what-they-ate-for-the-day posts which probably will end up with you feeling bored after just a mere 5 minutes of scrolling through. But still, they are more popular than you and popularity in the blogging world is like your grades in studying. Advertisers and companies basically do not care about how you got the popularity, as long as you can score thousands of visits per day, they are more than happy to pay you. Which is kinda superficial, if you ask me.

But that's how things work here I guess. After 4 years of dabbling in the blogging scene in Singapore, I realize that to really make it big, not only you must know how to write good posts, you must also be able to go out there and socialize and build your network. Knowing more bloggers through events and capitalizing on events coverage for example is a good way to kickstart your blog's visits. Merely sitting in front of the computer hoping that people would somehow be inspired by your posts to click the share button is akin to hoping that money would miraculously fall out from the sky. It won't happen, unless you have written something profound, that is, which not many of us can achieve. Which is why the simpler way is to go out, hand out some namecards and get yourself known.

I could never be able to do that though. I mean I tried a few times, with attending one or two events here and there but mostly what I end up with is some awkward conversations that are usually followed by some awkward silence and then me spending the rest of the event sitting alone, meddling in my own stuff like taking pictures or making a mental note to stick to my sit in front of computer and hope someone would hit the share button plan. And don't tell me to try to be more socially outgoing, some people are made like that and you can't expect to change overnight. It's like asking someone to stop being a homosexual or black for example. It's extroversist, when you discriminate someone based on their introvertness / social awkwardness and yes I just invented that word.

Coupled with my laziness, I think it would take me at least another 100 years before I could hope to achieve anything substantial from blogging.

On a side note though, Singapore Blog Awards is back again this year and like every year, I would shamelessly submit my blog for every category hoping to get something from it. Wonder if I'll actually win anything this year?