"Hello my name's Luke Phang, and as you can see, this would be my cover letter. It's not going to be good, to be painfully honest, because I've never written a cover letter before in my life that is supposed to be so general and I'm only doing so because the website requires me to or else I would not be able to update my profile.


And since we're being painfully honest here, I won't try to sell myself off on the basis of how good I am compared to others because honestly, I'm not. My grades are average at best and as compared to the rest of the NUS students, I'm most probably to be at the middle of the bell curve which our university loves to group us students under.


However, what I do have is a heart to learn. I may be a bit blur and clumsy at first but when it comes to doing what I like, I will do it to my best, often going to great lengths to try and reach as high as I can. Which is why in my 4 years in NUS, from a first year student who is lost in a completely new culture as I came from overseas, I have managed to achieve what I've set out to do during my first year, being one of the JCRC members in my hall, advancing to be one of the finalists in the Singapore Blog Awards and numerous other activities that I wanted to try out, such as dancing, videography and voluntary work.


I love to generate ideas and think of fun ways to do stuff and I can never linger too long on the same thing as routine bores me. Which explains why after 4 years, I've basically tried out as many things as I can through my hall and through part time work. For me, life is about living it to the fullest, trying out as many things as you can through a host of engaging activities.
So that's roughly all about me. I can go write 7 books about myself but I think I'm gonna stop here. Before I end, I would like to say that I love gaming, I love having fun and I love engaging with customers, so yeah, that gives you an idea of what kind of person I am. Thanks!"

That's gotta be the worst cover letter ever written by a university student in history. Or at least that's how I felt when I re-read the cover letter that I've just written for my profile for my school's online career portal.


Cover letter. I've heard my friends complain and discuss numerous times about the importance of one letter in determining your chances of getting employed here in Singapore after you graduate, hence the importance everyone associates with it. From attending classes that teach you the skills of writing a kick-ass cover letter to using the cover letter of the friend who just got offered six jobs as a template, it would seem that almost all of us are preoccupied with ensuring that our cover letter is the better than the rest of the people who are applying for job together with us.

But to be honest, this whole business of trying to write a cover letter following the standard format is just not my style. It's like trying to do the same thing as everybody else but at the same time you'll have to be better than them, which I totally loath, because it's no different than coming out as a product from a factory. All of us have the same specifications as our course bestows upon us, Architects design buildings, Engineers build etc etc, and we're picked by our employers based on the features that we describe ourselves as, through our cover letter, for example. It's like we're phone models for example, each with different features and our employer is the human buyer deciding which one that will benefit him the most.

So in my own anti-establishment way, I've written my cover letter as how I would write a blog post. It's childish, stupid and completely unprofessional, I know, but somehow, I just don't want to do things as how everyone is doing it. Writing a cover letter based on our achievements, showing off what we think we are best at and sucking up to the potential employers. Not always been the guy who stick to norms, I am and besides, I doubt one cover letter could determine the path of your future.

After all, I believe that when it comes to subjective decision like this, there's no one way of doing things, and no matter how hard you try, there's bound to be imperfections and criticisms, just like how this comic shows: 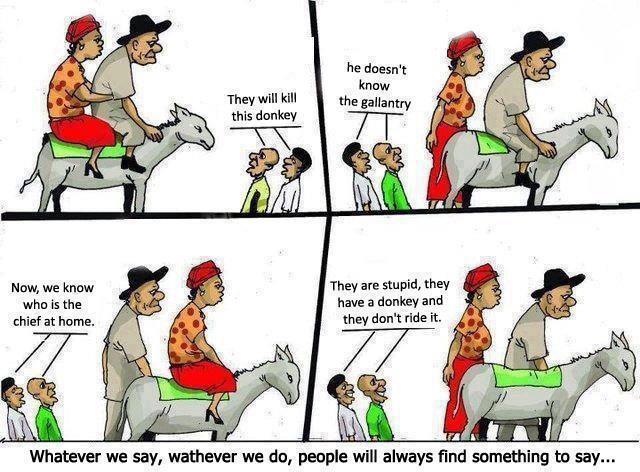 So which is why as different as my cover letter is going to be from everybody else, I'm going to do the way that I like it. And if worse comes to worst, I will just resort to my backup plan if I fail to find any job. Also know as, "Do you want upsize with that?" plan.