recess week is for recess, they said 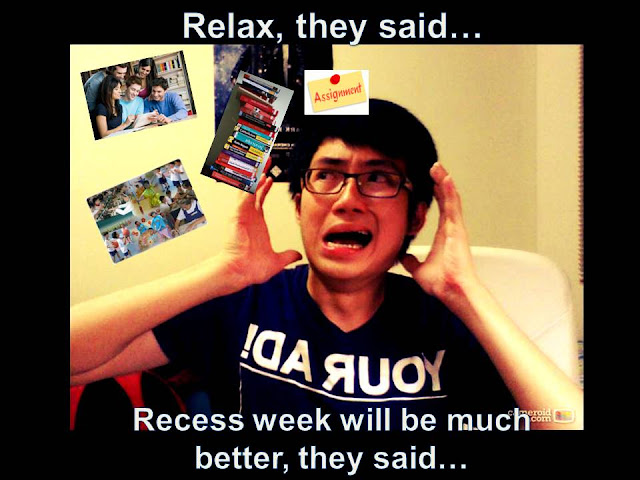 So the highly awaited recess week has finally arrived and from the looks of it, it's nowhere near of an improvement from the normal school weeks. Project meetings, assignments, my stack of unfinished readings and hall commitments are among the stuff that's gonna decorate the entire week.

But nope, I'm not gonna complain about it, not here at least, because some people will just come up to me after the post and say stuff like, "You know Luke, you should not post stuff like this in the public because people will read it and it doesn't reflect well on you", bla bla bla... so I'm just gonna dump the rest of my personal thoughts on a random anonymous blog on the internet to avoid myself from exploding as a result of accumulating too much pressure inside.

Me aside, have you heard of the name Shila Amzah recently? I have been seeing her a lot on my news feed recently and out of curiosity, I have decided to see who she was and perhaps blog about it! Since I guess the news of her wouldn't reach the mainstream media due to the policy that the Malaysian government has.

To put in a nutshell, she's a Malaysian Malay girl, which is not very out of the ordinary but the reason why she has been catching the eye of a lot of people is due to the fact that being a Malaysian Malay, she was able to win a Chinese singing competition that was held in China, amongst Chinese competitors, earning praise from all the judges. That show is called Asian Wave by the way, and you can watch the video here:

Honestly, it is people like her that makes me proud to call myself a Malaysian. When she sang that Chinese song, it felt as if all the racial boundaries and divide that some politicians try to create just melted away. I mean, why can't all Malaysians be like that? Where we don't divide ourselves according to culture, language and religion? Where we don't have the mentality where Mandarin should only be spoken by the Chinese, Tamil by the Indians and Malay by the Malays? Where we identify ourselves as Malaysian first rather than than our respective skin colour?

If Shila is able to go so far without any help, imagine how much further can we go as a nation?

Sadly, whenever I go to read Malaysian news, there's always stories of how "Malays should unite", "Chinese should safeguard their culture" and numerous other racism-linked and xenophobic mentality amongst Malaysians that pains me to see. Even after 50+ years of independence, Malaysians still cannot look past our own skin colour. Such a shame, ain't it?

Thankfully there's people like Shila who shows that boundaries can be permeated and nothing is static. Hopefully more news of her gets out though.