My whole body is covered with various cuts, bruises and blisters right now, and my body is crying out to me to have some sleep, but I know that if I don't blog about this today, procrastination will get the better of me and I will never blog it, so I guess this post is sort of a reflection of the whole journey that I had in the previous two days, which is experiencing lots of hardship in the process but at the benefit of learning something valuable in the end.

Returning after a one year hiatus, the Junior Common Room Committees, or JCRC in short, of the six halls of residences in NUS had a chance to attend the JCRC Team Challenge Camp again this year, which is an event organized by the Office of Student Affairs (OSA) which aims to bring together the student leaders from the six halls and to foster collaboration between the leaders.

The camp is held at Outward Bound Singapore, which is located at Ubin Island, and is fully subsidized by the university administration. It's kinda awesome though, considering the fact that Outward Bound courses are never cheap, and it made me a little happier knowing that the university do care about us and is somewhat concerned with the welfare of the hall residents, despite what others might think. Or what the gossips going around might be.

To be honest, I have never been to an Outward Bound camp before prior to this experience. I first came to know of this camp two years ago when my dear friend Jia Yee mentioned how much she wanted to go to this camp to me because it was fun and the second time was from Chern Tze when I told her that I am going to an OBS camp a few days ago, who warned me that I might need to prepare to suffer during the camp, which was quite scary to be honest, because I don't know what to expect. Nevertheless, I kept an open mind and tried to reassure myself that I've been through much worse before when I was a scout in my secondary school days when I literally cried to be let off the troop because I could not endure the training. 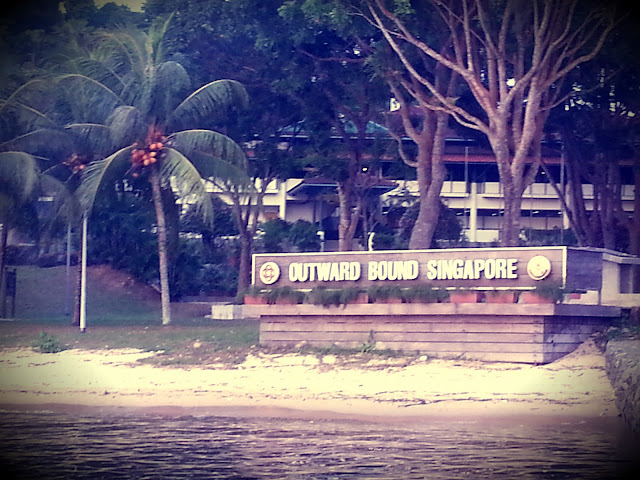 Thankfully, my prediction of my scout experience helping somewhat did came through. After all, what could possibly be worse than being not able to shower for 5 days? But that doesn't mean that it was any easier for me though. For a guy who never even touched a single gym equipment for the past 3 years and prefers the computer to his running shoes, it is still a miracle that I survived, which I am going to tell you the exact story now. There's no pictures though, because technology is not allowed in the wilderness (unless you want them soaked in seawater, mud etc etc), so you're just gonna bear with my words.

For the first day of the camp, shortly after arriving, we were required to play some icebreakers, in which we were divided into our respective groups according to our position and I got allocated to the group consisting of the various media directors and cultural directors from the six halls. How they linked media and culture together I'll never know, but I'm not complaining because most cultural directors are girls. And that was how our group identity ended up being centered on the word "Glamorous" for the entire duration of the camp.

After that came an event that perhaps I will never forget about in the entire life. We were required to kayak. Shouldn't be much of a problem, I thought. After all, I have kayaked 3 times before and it was quite relaxing. What possibly worse could happen? Somehow I've seem to forgot that it was an Outward Bound course and not some leisure kayaking facility at some reservoir.

When we were told that we'll need to kayak for more than 9km in the open sea and pass mangroves swamps to cut through the island, my jaw dropped. Then we were further told that there will be no safety vehicles following us (meaning no easy way out) and that we need to navigate on our own (the instructors will basically take a passive stance and not help out in anything), and I was already praying on my knees. And when we were finally required to conduct boat capsizing simulation on the open sea, my life began flashing in front of me already and I was thinking of how my parents are going to react when they find out that I've drowned in the open seas during an OBS camp.

Words could never be able to summarize the experience that I went through during that 5 plus grueling hours that I had rowing the paddles through the water but honestly, that experience will be one that I will never be able to forget. I remember starting out feeling pretty confident about myself (thanks to that 3 petty kayaking experiences) but as I began to feel the strain on my arm as I rowed the kayak together with my other 2 kayak mates, Pam and Gerald, I realized that the whole expedition is going to be nowhere near what I initially had in mind, and that was just the starting.

As I swung my paddle through the water again, and again, and again, memories of scouting came flashing back to me. The horrible experience of having to endure the pain on my shoulders as I lifted the mangrove and ran around the field were once fresh again in my mind. But unlike my scouting experience last time, I am not able to just throw down my paddles as easily this time, like how I threw down the mangroves, and call it quits last time.

I had numerous thoughts of giving up throughout the journey. The feeling is very similar to the one that I always have during a marathon. There will be a constant voice in your head telling you that you had enough, that your body is not built for this and that it's okay to give up because you're just not capable of it, and most of the time, you'll just give in to the voice, because that's the easier thing to do. To just run away and to avoid the hardships.

Sitting out there in the open sea, with Pam in front of me and Gerald behind me, both paddled furiously together, with no escape route in sight, I realized that giving up is not an option. There was no easy way out and by giving up, I was letting both of them down. I told that little voice in my head to shut up and stop being such a wimp. And I paddled on. Through the seas, through the swamps and back to the sea again. Non-stop for 5 hours straight.

To be honest, I was quite surprised at myself at the end of the kayaking expedition. Even up til the very end, although both my arms were super sore from all the kayaking, somehow I still managed to keep on paddling. And at the same time, have fun and encourage each other while I'm at it. It's amazing how far you can push your body's limits if you have the mind to do it. And the funny thing is that I thought I was going to die and I have reached my limit during the one hour mark. Had I chosen to just scream and throw my paddles then, I'm sure I will never be able to find out just how far I can go, which is until the very end of the journey.

Never give up. Persevere on. You can do it. Only then I realized how much those words meant and how much I could actually achieve as long as I shut up that self-defeating voice in my head. As I dragged my kayak back when we landed on the beach, never before have I felt a bigger sense of accomplishment. And sadness too, knowing how many times have I gave up just because I wanted the easy way out.

From this simple 2 days 1 night programme, I have done things that I have never done before in my life, learned valuable lessons that I would not be able to learn anywhere else. Climbing a more than 4 storey high obstacle course for example, with nothing but a safety rope attached to your waist, holding on to your dear life thinking how bad it's gonna be if you fall. Not to forget learning the basics of climbing in the process which was quite thrilling and exciting.

In a nutshell, it was a very enlightening experience to be able to attend Outward Bound for the first time and really pushing myself physically to the limit. The things that we learned during the course is something unique that we cannot get to experience outside of the camp itself.

In a way, it has helped my own hall's JCRC to bond and at the same time, helped us to get to know other JCRC from the rest of the halls better too. We had lots of informal talks and discussions over meals and games and managed to exchange quite a few valuable information among each other too. And perhaps the most important of all, the camp helped to erase our initial stereotypes and dislikes that we may have for other halls through all the activities. We learned to see the bigger picture, not as 6 separate halls, but rather as the combined halls of residence, which hopefully could lead to greater things to come.

Honestly, I had fun. And perhaps if I have the chance, I would definitely join Outward Bound again, despite my tendency for injuries.