This year I had the chance to participate in GEL again, which means Gathering Eusoff Leaders in long, an event that aims to bring together Eusoff Leaders, hence the "Gather" and to help them bond with each other and also to buff up their leadership skills by a notch through the various activities that are organized.

This year, however, things were quite different from last year because instead of being just a mere participant, I was part of the team that organized the whole event itself. It was kinda nervous, to be honest, because aside from preparing for the events itself, I had to also double up as a group leader during the camp, which was quite a daunting task because well, being the media related guy who spends a lot of time behind his computer, trying to hype up a a group of people may not be my strongest skill set.

Still, knowing that with great power comes great responsibilities, and my boss, who is the president, is probably gonna barbecue me alive if I choose to avoid the camp, I bravely accepted the challenge. 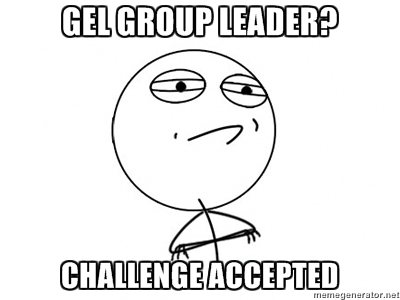 Based on our experiences last year, and following advice from the previous JCRC, a lot of the core elements were retained from last year's GEL, with some changes being made here and there in hopes of making the whole GEL experience more enjoyable. For a few of us, this was the first time we're organizing an leadership camp like this and we're quite nervous about how it would turn out in the end. There were meetings late into the night, game testing, souvenir making and loads of other preparatory activities that were done to ensure that everything will work out in the end.

The camp started on a Friday evening this year, and truth to be told, being the only group leader is quite an intimidating task because you're expected to tank everything and there's no one else to turn to if you need help. Still, I decided to man up for the rest of the camp and just be myself.

The first activity that we had for the day was food trail, after all, what other way to bond than over food, and this year, we decided to include food stalls that were around NUS so that the participants will know good places to search for food should they ever become bored of hall food, which is quite a common happening in Eusoff Hall.

There were six groups in total, with each of the group being allocated different zones around NUS to avoid any clashes and to let the participants experience as many places as possible so they could share info among each other when the camp ends. There were zones like Clementi, Holland Village and Bukit Timah which are all accessible from the Kent Ridge Bus Terminal behind our hall. My group was allocated the West Coast zone, which is just a stone throw away from our hall, which is quite awesome because it's so near to hall and it's like my turf there. Among the food that we managed to taste were the delicious fish head curry from West Co'z Cafe, duck rice, ice-cream and a interesting Milo Rainbow from the Ayer Rajah Food Centre.


And from the looks of it, the other groups managed to have loads of fun too during the the food trail event.

The first night ended with our hall master, Prof Tan Tin Wee, giving a speech to the leaders about what it takes to be an effective leader and the importance of leadership itself to all the participants of the night. Our president, Gangyi then concluded with a note urging all the participants to have fun and to look forward to the second day of the camp.

For the first part of the second day, two speakers were invited to give a talk on leadership to the participants. One of them were our very own ex-Eusoff president, Mr Sim Jit Vern, while the other is Mr Jimson Cheng, who is a headhunter for top executives in the corporate world and deals a lot with corporate leadership and who also happens to be Gangyi's mentor. Both of them gave interesting insights on being a leader from different perspectives and I learned quite a lot from both of them too, despite being half-sleepy at the beginning of the talk. We were later required to discuss and present the various challenges faced by hall leaders and it was quite interesting to see the issues raised by the participants.

After the talks came the more exciting part of the day, games! This year, instead of holding the leadership games session at East Coast Park, we decided to have it instead at Botanic Gardens to have a change in feel for the participants who came last year and because we thought that the environment there would be great for games.

Botanic Gardens was tiring, no doubt, with the sun shining down on us and the long walks that we had to take, but still it was fun seeing how the participants managed to outsmart us for a few of the games, for example the one at the reflexology path where they had no trouble breezing through the entire path when we thought it would be painful for them. Still, my group decided to take a break at the nearby prata shop soon after due to everyone feeling exhausted. Perhaps having a bicycle would have been a good idea after all.

When evening finally came, it was time for the finale of the whole event, a barbecue session at the Faculty of Law, NUS. Nature decided to play a prank at us by letting down some rain when we were setting up, but thankfully, it decided to let us off easy after around 15 to 30 minutes of panicking from us.

And I must say that the Law Faculty with its colonial style of building structures make an awesome place for barbecue session. With AudioWorks helping to bring the atmosphere out through music, we had loads of fun talking to each other over the barbecue pits or while eating all the delicious food prepared. It was quite romantic too, facing the field, eating that awesome chicken wing under the stars.


Of course, with such a romantic setting, none of the participants wasted time in getting their photos taken. Credits to Jarrod who selflessly dedicated his time in helping each and every group with their photo request.


It short, although there were hiccups here and there, it was a fun experience. I enjoyed myself and thankfully, everything went fine too for my group. Turns out a socially awkward media guy can be a group leader too! A good one, I hope.

And with that marks the end of the second GEL camp organized by the JCRC for Eusoff Hall's leaders and freshmen. Based of the feedback that we obtained, the general feedback was good with only some details need touching up, for example the Botanic Gardens session, and hopefully the next JCRC would be able to improve on our mistakes and bring out better GEL as the years go by. And most importantly, keep it fun!