So yesterday was NUS Rag Day 2012, a day where the various halls of residences and the universities come together to build a float and to put together a performance as a thank you gesture for the public who have donated to their money during NUS Flag day which took place two days earlier.

Of course, that's the official description of the event and if you have watched the video "From Rags To Riches" or even read the article "Rag and Flak Day?", or even have been a part of rag before, you would know that Rag Day is much more complicated than that. Personally, I have come to associate Rag as a place where unbreakable friendships are made, where people come to find their passion and try out things for the first time, and where our hall/faculty pride stands. Personal opinion, of course.

I've participated in NUS Rag as a dancer for two years already, and having thoroughly enjoyed the experience both years, I thought that this year perhaps I could sink back and do something less taxing instead, like taking photos. So along with the rest of the Eusoff and Temasek (we should really think of a funky name to call ourselves like how Kent Ridge and Sheares call themselves KRaSHers) dancers on the 10th of August 2012, I was already wide awake at 5am (reason being I didn't sleep the night before) with my 60D and tripod in hand.

Having experienced Rag for two years already as a dancer, I could feel the dancer's excitement and nervousness as the clock slowly ticks towards the time of the performance. Rag day is, after all, one of the most watched event in NUS, reason being it's directly held after the orientation period.

This year however, the performance was shifted to the morning (and scheduled to end before noon) so despite the fact the fact that I had not stayed up so long for the past 3 months before, I had no choice but to tag along with the rest of the Eusoff/Temasek dancers to the SRC field before the sun rose (on hindsight, it was an awesome idea because I can take a lot of awesome photos!).

Like every other year, the raggers were already there earlier than us, some were doing last minute touch-ups and doing the necessary arrangements to the float, while others were waiting to help the dancers do the make-up before the big performance.

Year after year, the raggers never fail to inspire me with their dedication and commitment. Having to endure long sleepless nights to mass produce the decorations for the float, that's not something that everyone can handle. If you ask me, I can't even last a night. I'll probably drop down dead the next day from all the lack of sleep. Really.

It just felt like it was only yesterday when I was in the exact same spot, having my face painted while nervously going through the steps again and again in my head but yet on the same time feeling the excitement of my life because I'm able to perform for so many people. Not to mention all the good times that I had with my fellow dancers and the one-in-a-lifetime learning and dancing experience that you can find nowhere else. I kinda miss the feelings though.

But then again, being behind the camera lets me take a step back from all the chaos and the rush of preparation, and I was able to admire more of the sights and sounds that I would not able to do so if I'm preoccupied with a dancer role. It was one of the first time in my four years of experience in Rag that I was able to take so many close-up shots of our float the the decoration. And in a way, when you're that close to the float, it's hard not to admire all the hard work that has been put into every single detailing of the float. 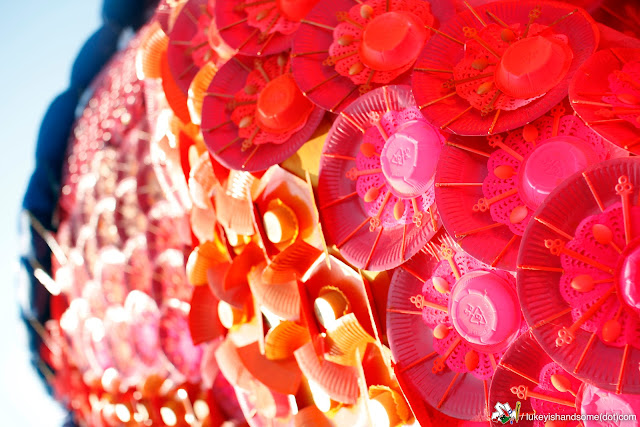 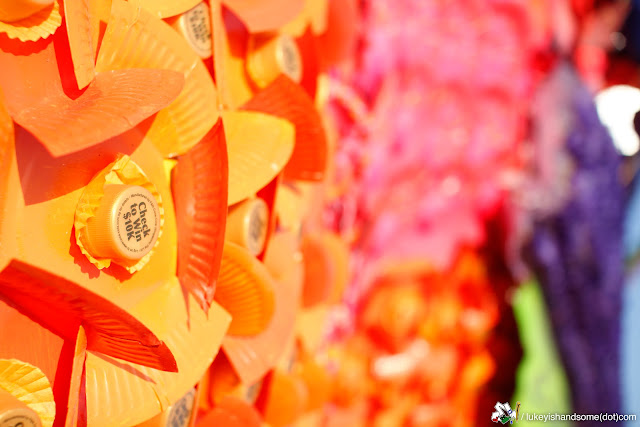 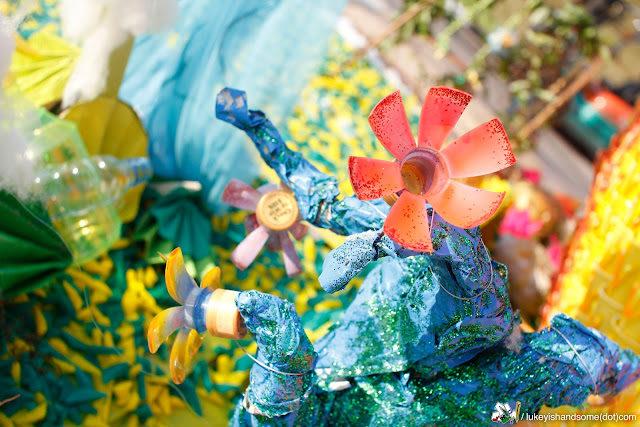 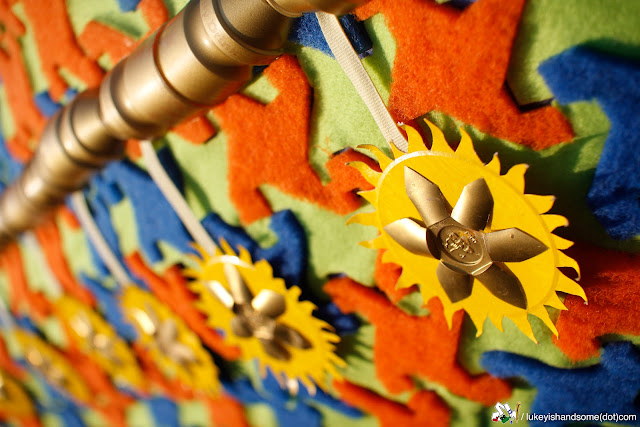 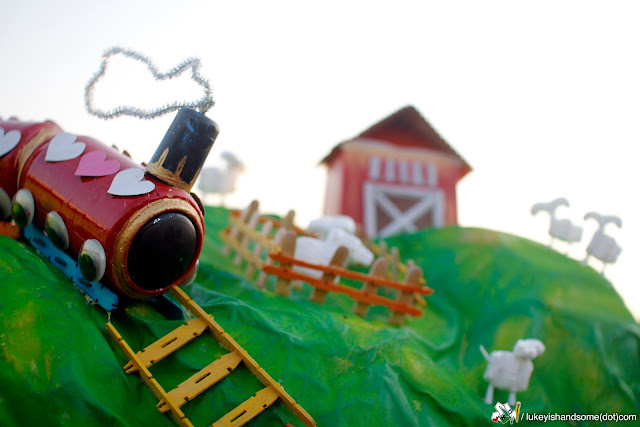 Some of the detailings are just crazy awesome right? Now imagine a whole float being covered by it. The work done by the NUS raggers can just make your jaw drop sometimes. And as you can see, Rag isn't just simply about giving back to public anymore, it has also became a place where one can hone your artistic skills. After all, how many people can produce decorations like these using only recycled materials?

To be honest, I was really happy that I made it to Rag this year. Rag certainly brings back a lot of memories for me, it was the place where I started to dance in Singapore, after all, and it was here that many new friendships were forged and strengthened.

Though we may not have made it to Chingay this year, no one can deny that the amount of effort that the raggers and dancers have put in this year is crazily a lot. It's just that the other halls managed to come up with a stronger performance. The costumes of the KRaSHers were superb while the RH/KE dance was one of the most entertaining that I've ever seen. It's a victory well earned for them, to be honest.

But nevertheless, I'm sure Eusoff/Temasek will come back again stronger next year (if we still are paired together) and given the right preparation, Chingay is not an impossible dream, just like what we did the for the past two years.

But all in all, I had fun. I enjoyed taking photos for the dancers and raggers, capturing memories of sorts and perhaps helping them remember that they've participated in such an awesome event before during their university life. Speaking of memories, I went to get some memories for myself too. 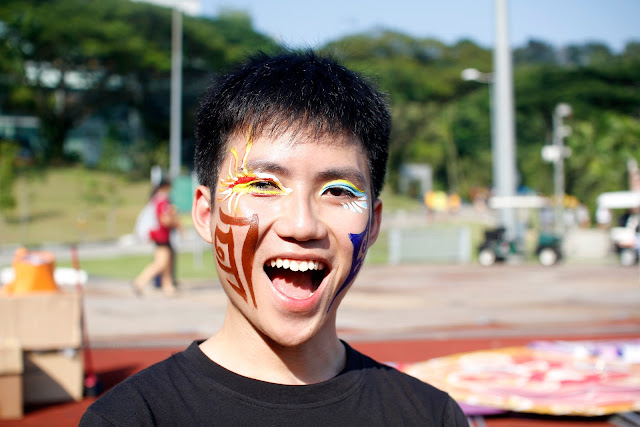 I got myself face-painted with all the 4 designs of the dancers' face paint. So according to official terms, I was a Sun Girl + Moon Girl + Sun Boy + Moon Boy. I don't know what that makes me. But at least girls liked it... 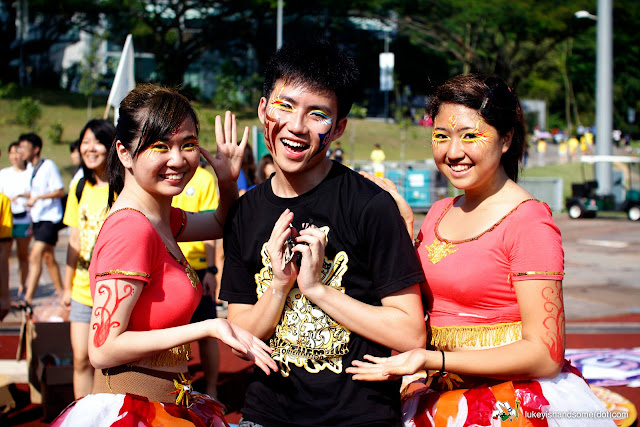 Or it may just be the case that the paintings on my face were just more attractive than my face itself.

For more pictures do visit my Facebook page at https://www.facebook.com/lukeyishandsome