Hello, everyone! It's been a while since I last came out with good posts so I think I'm gonna do it today by making all of you hungry! But before that guess where am I for this picture? First one who get it right will get a fully sponsored nonsensical blog post about you! No kidding!


If you're stumped, or if you're not from Singapore, I was invited by one of the shopping malls near Orchard, 313@Somerset as part of the OMY.sg blog club to attend a food tasting session in conjunction with their latest promotion, Let's Talk About Food, which will be ongoing for the entire month until August 31st, 2012. In addition to that, diners and shoppers will also be able to enjoy live performances from musicians and chefs for this entire period.

Being a food lover myself (all Asians are, there's this gene in us that makes us go crazy when it comes to food), I immediately jumped at this opportunity when I first saw the email. After all I had never attended any food tasting sessions before (making this my first virgin attempt *winks*) because I was too afraid to interact with strangers, but in line with the Lukey's Vision 2012, I ignored all the misgivings that I had and just took a dive into the water (or more into the food, I think).

For the day's food tasting session, we the bloggers were there to experience the hand-in-hand promotion that goes along with the Let's Talk About Food campaign, the Dining Wallet promotion. For only 19$, you'll be able to enjoy more than 40$ worth of food of food vouchers that you can spend at any participating food outlets located in 313@Somerset. The vouchers can be divided into Lunch, Dinner, Snack and Drinks vouchers that you can use depending on the type of promotions the different shops have.


For the session, we were brought to a few of the participating outlets to taste their food and help to promote about this campaign. The first venue on the itinerary was the food hall located at the Basement 3 (so deep!) level of 313. The bloggers were served sushi by Umisushi, chicken floss pancake by Jollibean and small wrap by the Flyin' Bread, which I missed out on a large portion of it because I overslept on the MRT and ended up in Woodlands instead.

I did however, managed to catch one of the last dishes served, the small wrap by The Flyin' Bread, which is well, a wrap of a specially made chicken and veges inside that tastes absolutely delicious. The owners of the shop were also very courteous to try out the fillings on its own to give us an idea of what fillings tasted like.


I personally liked the wrap really much because it was filling and the chicken tasted heavenly. It's also healthy too, considering the amount of veges that they throw in together with the chicken.

For our second stop, we were ushered in to Paradise Inn, a restaurant serving Chinese cuisine to sample the food that you can get through using the dining wallet. We were served the staple Chinese dishes like Fried Rice (comes with Chinese sausages and mushroom), Fried Vermicelli, Braised Vermicelli (comes with seafood) and Stir-fried Hor Fun with beef.


The fried food were normal at best, like those you can get near your house, so it was not very exceptional. The meat (beef, seafood) that they used were great though, the beef was tender and the seafood fresh, and before we knew it, all the meat were gone in seconds, leaving the poor ol' vermicelli, rice and hor fun behind. It's a place that you might want to consider eating at if you're a fan of Chinese cuisine and if you're entertaining a lot of people.

Our next stop of the night was an Irish bar and restaurant called Malones, which is located at L1 of 313@Somerset. It's the place called Discovery walk that you'll pass by if you're heading towards the Somerset MRT from Orchard. Sadly, we were not served any alcohol because it's not included in the promotion but we did get to try a really unique tasting pizza instead.


I love the taste of how the taste of tomatoes, mozzarella cheese and basil are mixed together on this humble piece of pizza. It's an ideal choice of snack when you're just looking for a bite while chilling with friends and sipping that cold glass of beer.

Besides the pizza, another thing that I noticed about Malones was the picture they used for their restaurant. 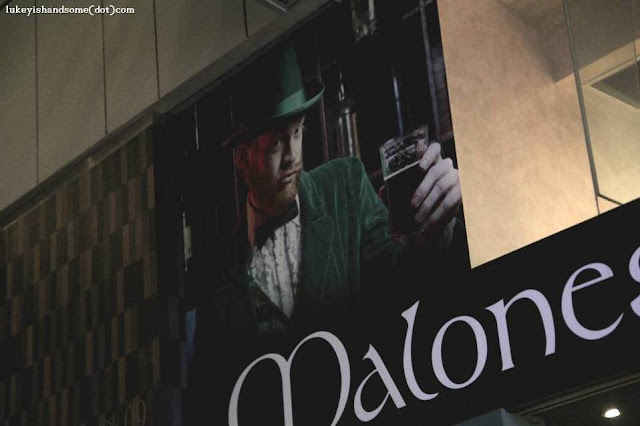 Kinda reminds of the time I became an Irish leprechaun myself. 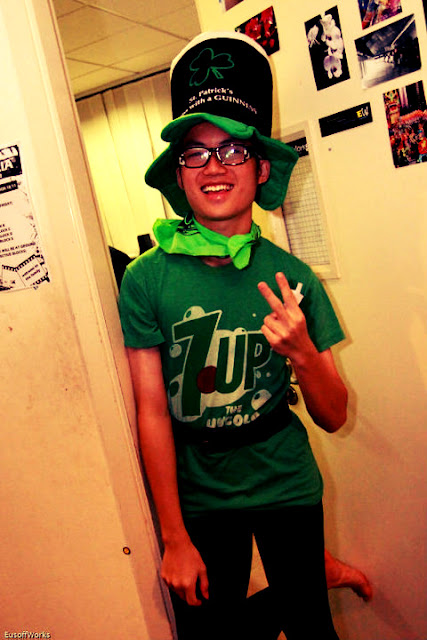 Not very handsome, but that was two years ago, before Lukey became Lukeyishandsome, so don't let that affect you.

For our third stop, we headed to the Charlie Brown Cafe (Peanuts!) which was located on the same level as Malones. I was looking forward to it though, because Charlie Brown and his gang has always been a highlight of my newspaper reading times when I was young. And to my delight, there were loads of photo taking opportunities for a fan boy like me in the cafe. I wasted no time in getting my camera clicking.


Isn't Snoopy cute? While other shops have the invite-wealth-cat (direct translation from Chinese), the Charlie Brown Cafe has their own invite-wealth-dog called Snoopy.

And for our visit for the night, the Cafe staff has prepared grilled chicken wings (called Charlie's wings, which  gave me all sorts of images), their signature drinks and chocolate cakes for us.

The wings were nice, the cakes were nice but the drinks were not of everyone's taste. Some liked one, some like the other and there was no consensus on everyone's favorite drink. My take? Just be sure of what you really what when you're ordering the drinks with loads of colours there. Because if you don't like it, you'll seriously hate it. I think it's because the taste for each individual drinks are very strong, which was why there were strong preferences over the choices of drinks.

Well, after a long night a food tasting, we're now finally nearing the end of our food tasting session. Our last stop of the day is the Food Republic outlet which was located on the top floor of the place. By this time, all of us were already quite full from all the food and when we're told the amount of food being served at our last stop, we were wondering if we have the ability to finish it all.

We still managed to take photos of the food like crazy though.


Speaking of taking pictures, when it comes to food tasting events with bloggers, there's always this mantra of "Take Pictures First, Eat Later". Meaning that no matter how hungry you are or how eager you are to try the food, before you can touch it, you must snap a picture of it first. It was amusing to see how all of us whipped up our cameras the first thing when the food arrives. Even the waiters were laughing at us.


But I guess that's what make us bloggers special. Even though I was half-afraid at first that the entire evening would be filled with awkward silences, I managed to make some friends by the end of the evening. There was Isaiah the father blogger, Erica from Pink-Buble, Albino (did I get your name correct?) from the Philipines, Christina and Jeremy whom were all very friendly and cheerful, which made the evening quite enjoyable, really. A far cry from the scenario where Lukey is sitting at one corner drawing circles I had imagined before the event.

One of the memorable interactions that we had during the event was when Janet (she's from OMY.sg who helped to facilitate this event) tried to introduced my blog to the rest of the bloggers. Little would I have imagined how catchy the name lukeyishandsome(dot)com would have sounded when I first came up with the name for this blog. Everyone was basically laughing at it and trying to see whether I am really that handsome (of course I am) as what my blog URL says. I guess I have my gay buddy Xian You and Vivian to thank for coming up with this crazy name for me.

It was a fun evening, a filling one too with all the food and to end off the day, we took a group picture to commemorate! 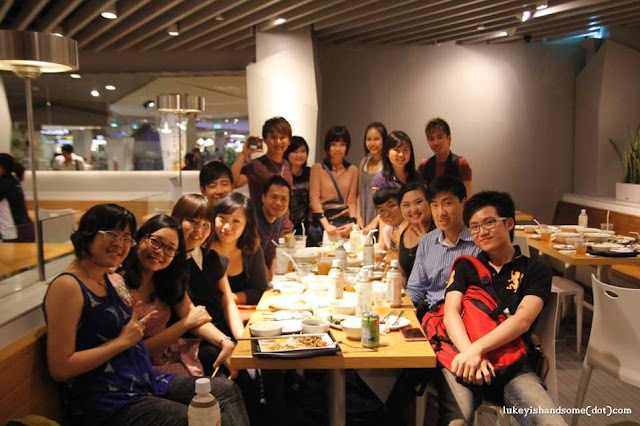 I guess you can say that I'll be definitely looking forward to joining more events like this in the future.