Malaysians are blind. Or at least that's what I thought when I read the Twitter replies to the #ChuaVsLim hashtag in Twitter. So much so that I have to facepalm myself. 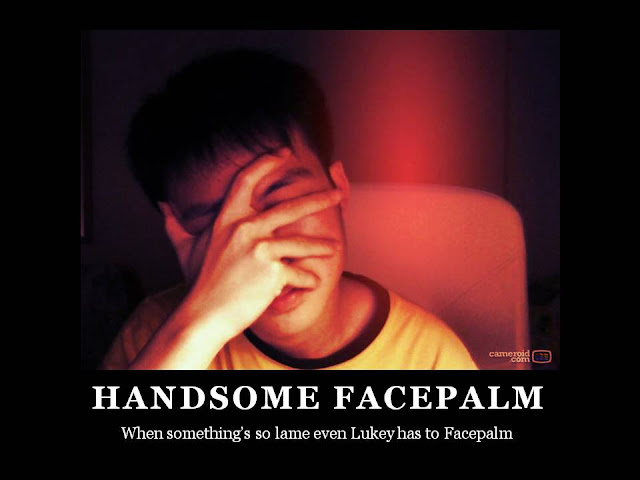 The facepalm is there because I find it hard to believe that even after so many events that happen and even with the massive amount of information that one can get with the advancement of technology, there are still people who believe that Barisan Nasional (BN) or the ruling government is doing the best that they can to promote the interest of the people.

To these people, BN is seen as the protector of Malaysians, a party whose purpose is nothing but noble while the opposition are a bunch of no-good lying thieves who's intentions are to destroy Malaysia and its culture. Sometimes, I find this blind optimism in BN among this group of people a little bit disturbing to me for various reasons.

For starters, information is greatly suppressed by the government. The mainstream media is controlled by the ruling party and they only allow news that benefit them to be broadcast. Rarely do you see news or editorials that praises the opposition or any news about them at all. It's almost like North Korea, if you ask me, where propaganda by the government is taken as whole truth by the people.


This is sad considering the fact that unlike North Korea and even China, information on the internet is not suppressed as much as the information available on the mainstream media. With just a click of a mouse, the people can access a wealth of information that do not just reflect what the government wants you to think and is much closer to the reality.


However, this group of people seem to ignore these types of news for instance and still choose to think according to the way they're spoon fed. Looking at their tweets, I find that what they're saying is exactly like how the mainstream media has printed out and I find it a little bit sad that a lot of Malaysians are not able to think critically using the wealth of information that are readily available to them. It would seem as if a group of us are unable to take in the different sources of information and analyze them according to their merits and cons to decide who is really telling the truth. It would seem that there's this innate need for us to be spoon fed information and be taught what to think. A product of the education system?


You see, these groups of people often fail to take notice of the bigger picture when it comes to idolizing the current government of BN. For example, although the island of Singapore is so much smaller than Malaysia, it is doing so much better (I know because I lived in to countries before so I'm not merely speculating) relatively economy and social wise. If BN is really that noble, capable and responsible, how on earth did they let a small island overtake us? Is it because Singaporeans are much smarter? Or is it because somewhere on top in the Malaysian government something has gone really wrong that hindered our process? Things like corruption, nepotism and racism?


I'm not saying that the opposition is entirely pure white either, I'm just lamenting the fact of how some Malaysians are so able to believe what their dear government say to the point of worshiping it, treating as if BN is the sole protector of the nation and that BN is the sole party who has the nation's best interest at heart.


After more than 50 years in power, I believe that it is finally the time to give them a wake up call because I believe that being too long in power is bad for everyone as power corrupts. The facts and scandals are here to prove it. Besides, even if PR turns out to be a wrong choice, we can always vote BN back in to power after a few years. Why are we so afraid of change anyway?


It's like an old man who refuses to move from his old wooden house to a newly built brick house because he's so used to his old house and has fears such as being uncomfortable with the brick and stuff in the new house. However, he does not realize that the brick house offers him much better protection than his old wooden house from the elements such as rain and cold weather solely because he refuses to try, stuck in the old mentality of his. If only he would go to new house and live one day to see for himself.

We're like the old man in a way. BN is our old house while PR is the new house. After more than 50 years in the ruling, our old house is bound to have cracks and leaks here and perhaps it's time for us to try out how the new house is like. After all, why are we so paranoid?