Last year, I was emo by the river. 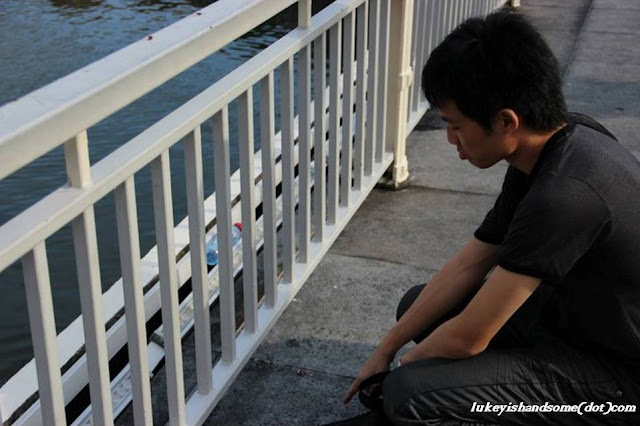 This year, I went for an upgrade and chose to emo in the Singapore Flyer instead.

This year, I had the honour of once again attending the Singapore Blog Awards as one of the finalists and to be honest, when I first nominated myself (yes, I am that thick skinned) for the awards, I wasn't so sure of being able to make it to the finals because there has been sort of a drought lately when it comes to me participating in blogging competitions or winning stuff. It almost seems like something has gone wrong somewhere and the golden age of lukeyishandsome(dot)com has come to pass.

Thankfully, there's still some handsome left in this blog and by some miracle, I was once again chosen as one of the finalists for the awards, which thrilled me a lot because I was getting kinda bored of the mundane-ness anyway. But instead of the Best WTH category that I was selected for last year, I was instead chosen for the Best Y-Bloggist instead this year, which I supposed is a good thing (?) because from being someone that makes my reader goes WTH?!, I am now a young and handsome blogger. Not bad right?

And yep, that's the rough story of how I ended up in the Singapore Blog Awards (SBA) this year.

As compared to last year, my experience of SBA this time around is quite a different one. For starters, instead of my usual gay buddies, I had a pretty le gf to accompany me around. Which is a pretty good change from the usual, because with my tendency of bringing guy friends to every blog event I attend, some of my friends are really beginning to question my sexuality.

I was quite proud actually when le gf first promised to accompany me to the event, thinking that everyone would be jealous of me but as I soon found out, another change to the awards this year is that its being held outdoors instead of indoors. I had initially told le gf that the place is gonna be cold and when we found out that the event is under a tent which is under a hot sun, well, lets just say that a hot weather and le gf combination doesn't really go well.

Lesson learned: Always do a research of a place before going there. Or else you're gonna have a hot time. I learned that the hard way too by wearing a freakishly thick long pants and a long sleeved shirt. Not a good thing for someone who sweats a lot.

Still, the whole event this year has a completely different feel to it though. As compared to last year, the awards feel more vibrant and younger this year, and even though I was like a water pipe (because of the epic perspiration rate, and that's a chim English word), I seem to enjoy the event a lot.

Maybe it's because Poison Ivy made an special appearance during the event.

And soon after even Batman and Joker came to join in the fun.

Or maybe it's because I have additional friends together with me this year. A friend that I got to know during my first year stay in hall, Lai Wee Kiat (he blogs at Fabodylous.com), and his +1 for the day, Joy, also my hall mate, were there too during the event and we sat together for the entire event, which made it much more enjoyable and less boring. They even cheered for me too, which delighted me to no end, because I secretly enjoy people cheering for me inside. *insert evil laughter here*

Or perhaps it's our two lively emcees for the day, who kept the whole atmosphere vibrant and relaxed even under the hot weather.

Or it could be the good food provided too. I enjoyed it so much until I forgot to take pictures while I was eating. Oops. 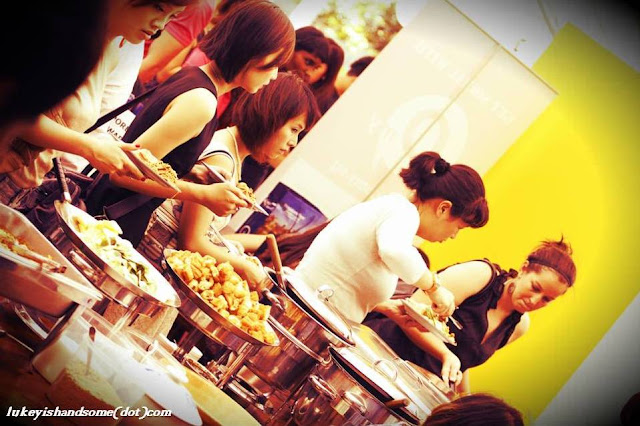 All in all, it was a great event. The organizers even had the Minister of Education, Mr Heng Swee Keat as the guest of honour for the day. I enjoyed his speech though , where he talked about the relevance of blogs in education and shaping the youths of today. And he seemed pretty friendly too. The winners even had a chance to enjoy a flyer with him. How awesome is that?

Besides, it was great seeing my face on the finalist screen again. Feels like I'm some big shot celebrity at some big shot awards ceremony. You know, like how they do it at events like Oscars and Grammy? Too bad the announcer had a sort of Hong Kong accent to it. Maybe it's more like the Golden Horse Awards instead of Oscars.

But as the second picture of this blog post showed, history sort of repeated itself again and I had to walk away empty handed from the awards this year. To be honest, I had high hopes though, because the task was judged based on a video and a blog post, and being someone who had experience producing videos before, so naturally I was confident.

However, like how I used to say, when it comes to blogging, everything is subjective and is dependent on what the judges like. Besides, I had not put in 100% of my effort into that blog post of mine (I was half asleep when I wrote it) and I allowed my confidence to get the better of me. I became complacent. In the end, I have only myself to blame. One should never overestimate oneself and underestimate others, I guess. It's a painful lesson, but a worthy one.

A bit tad disappointed, I am, because I really wanted the Panasonic camera but oh wells, can't be complaining I guess. After all, I suppose the journey of blogging isn't exactly an easy one. But that ain't gonna be my excuse. When next year comes, it'll be my turn to be on stage, holding that award. And as le gf said, if I really want my blogging career to take off, I cannot just take it half heartedly. So Lukey is gonna be burning with the blogging spirit for the next one year to come! Roar!

So yep, that concludes Lukey's post of the Singapore Blog Awards version 2012. Hopefully when 2013, comes, you'll be able to catch it again at the awards!