I read with amusement today about a photo that was shared widely among my friends in Facebook. It's claimed to be from the Star newspaper, one of Malaysia's mainstream newspaper, depicting what is supposedly to be the Sultan Azlan Shah Airport's new female toilets in Ipoh and their improved standards and cleanliness.

However, there seem to be one problem with the photo, instead of the ladies, you have a bunch of seemingly male students depicted in the photo. See for yourself: 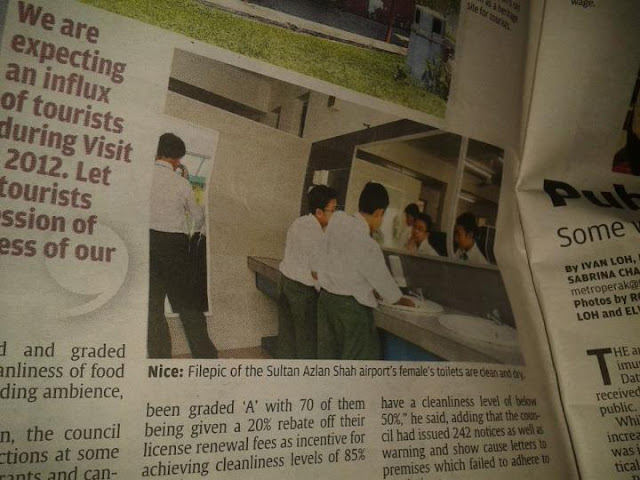 Anyone who studied in St Michael's Institution, Ipoh, before would have easily recognized the photo at first glance. After all, the toilet in the photo is none other that our very own "world class toilet", as how one principal used to put it and our school's signature green tie is also partly visible in the toilet. Clearly we have a case of mistaken toilet identity here.

I don't know whether to laugh or cry at the reporter's seemingly careless mistake of not double checking his/her work though, because it is very obvious that the mistake could have only be committed by someone who absentmindedly grabbed a photo from the folder "Clean Toilets" and included it in the article without double checking. I mean, how can such a big thing escape your eye? One or two typos could be forgiven, but for such a big photo to escape not only the journalist's but also the editor's attention only points at the professionalism and the standards of our mainstream newspaper today. After all, if you see guys standing in a female toilet, wouldn't you feel strange and would at least cross check the origin of the photo?

A part of me weeps for the state our country is getting into today, looking at the people they hire for the mainstream media, not only at the Star, but also newspapers like Berita Harian and the Strait Times and also Astro. The recent censorship of BBC's coverage and heavily biased account of Bersih 3.0 only points to how low our Malaysian media standards have dropped. It's not journalism, it's more like a government propaganda outlet. And now we have reporters who can't even be bothered to check their work, along with editors who perhaps sleep on their job.

I could also lament about how talented people, people who can do much better than the above reporter, are exiting the country in droves because the current government does not want them but I think I'm gonna stop. It's just sad, you know, to see how we are slowly turning into some laughing stock of the world.

Perhaps I'm overreacting, perhaps it's just an honest mistake by the people at the Star. But what I know is people are currently laughing and ridiculing the newspaper all over Facebook and it just serves to reinforce the idea our newspapers have only one use which it is good for, and that is as a nasi lemak wrapper. Perhaps it's time to "Bersihkan" our media also.