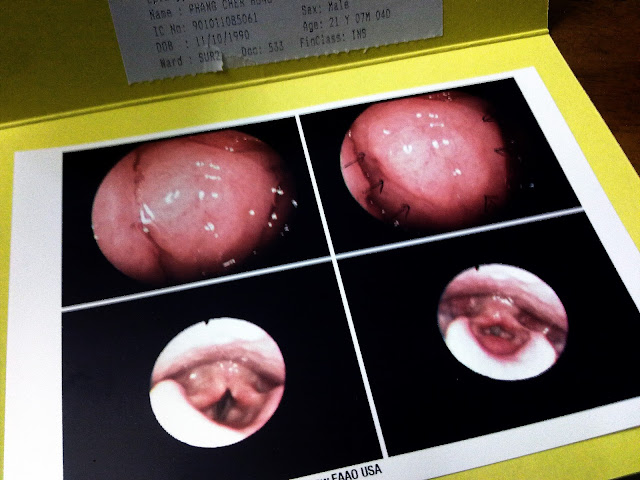 ...is a photo of the interior of my nose, courtesy of my one day stint at the hospital today.

After years of persuading and nagging (mostly nagging), my mum has finally gotten me into hospital to undergo a check on a lump on my throat, which has been sitting there for quite some time now since being detected three years ago during the compulsory university health check.

I would prefer to simply dismiss it as an Adam's apple that grew in a strange location but I know that you an't simply joke when it comes to health matters and I wouldn't want my mum to pester me for another three years to come so I reluctantly agreed to the hospital stay. So in I went and like all hospital stays, I was given the complimentary blood test, urine test, X-ray scan, CAT scan (which I never experienced before) and also a nasal something-scopy, which included a very long fiber optic cable going up my nose (which I have never experienced too and hope that I will never get to experience again).

Through this experience, I realized that trying to diagnose the cause behind a patient's discomfort is really much like a scientific experiment that we used to do in high school. The doctor is the experimenter and the patient's illness is the problem. You form a hypothesis about the cause of the illness and employ various methods to test it out. Methods like blood test, CAT scan or urine test. Through these tests, you eliminate the possibilities one by one until you reach a conclusion. Much like the null hypothesis theory.

Which means that each new patient is like a new experiment to the doctor, where he/she has to test out his or her hypothesis of illness's source. Because each and every patient is different with varying sources or symptoms, the doctor can never be too sure of his/her initial deductions until results from the tests come in. Which in turn means that we are some sort of guinea pigs when we're visiting the doctor.

Of course, through numerous experiences, it would allow the doctor to make more accurate guesses but when it comes to ambiguous cases like the lump on my neck, they can never be sure of their hypothesis until they have the test results. So you can never be too sure when it comes to disease/illness.

This experience did not only taught me that though. It also taught me how a CAT scan felt like. 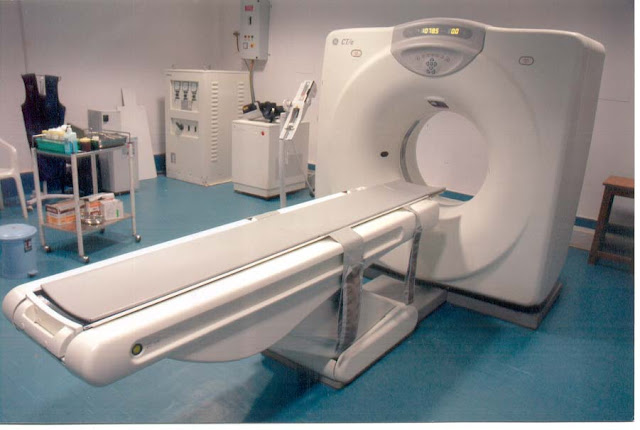 One thing about CAT/CT scans like this is that reading about it is totally different from undergoing it yourself. Now I finally understood why my textbook mentioned that there were people who refused to undergo scans like this. It's far from comfortable, that I can assure you.

First, they strap you to a bed. Then, they poke your arm with a needle so they can inject a sort of chemical in to let them see your brain more clearly. Finally, they put you in the machine and you spend like the eternity there feeling heat all over your body because of the medication they pump into your body, wishing for everything to end soon. I didn't like any of it. Pain isn't really my strong suit.

But survive it I did and after numerous tests, the doctor gave me a clean bill of health. Now what's left is the surgery o extract that lump out and give it a chemical test to see what it really is. A less than 30 minute surgery in which I'll be sedated the whole body for the first time. To be honest, I'm kinda scared of the whole sedation plus surgery thing. Questions like, "What if I'm too handsome to be sedated and I would have to undergo the surgery awake" keeps playing in my paranoid mind (must have been inherited thanks to my mum).

Still, I have read few accounts of surgeries like this and they all tell the story of having a wonderful sleep to wake up finding everything has gone well so I am going to repeat those assurances when I get whisked in to the operation room a few days later. And it would also finally give the case of "Lukey's Lump" a close after three years of nagging.

Besides, the doctor also told me a good news. According to him, there were too many psychiatrists in Ipoh but no psychologist. Maybe I could consider pursuing Masters and perhaps come back to Ipoh and open a clinic as a retirement plan when I'm bored of the exciting life outside. Maybe.