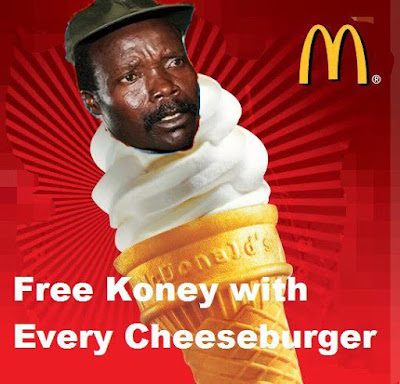 I'm not saying that the campaign is entirely useless though. It did raise quite a lot of awareness about the humanitarian crisis in Uganda but I think that aside than just hitting share, if you are really passionate about it, you should go more than that. Being aware of injustice is one thing, doing something about it is another. After all, I'm sure we are all aware of bad things happening around the world (North Korea, Myanmar, just to name a few) but that's as far as where we'll go. Even though we might be aware of it, if we don't do anything concrete about it, nothing is gonna change.
And when sharing stuff on the internet, especially when the stuff is emotionally charged and laced with politics, it's best to do more research about it to determine the authenticity of it and whether that stuff is relevant or not. Be critical. Don't be afraid to question. Because there are many EVIL people in this world that would not think twice about manipulating your own feelings to further their own goals, so it's always good to be alert.
For more alternative viewpoints surrounding the Kony issue, you can go to these following websites. It never hurts to get as much information as possible.
1. http://blogs.independent.co.uk/2012/03/07/stop-kony-yes-but-dont-stop-asking-questions/
2. http://justiceinconflict.org/2012/03/07/taking-kony-2012-down-a-notch/
3. http://www.reddit.com/r/worldnews/comments/qlejg/kony_2012_is_a_campaign_that_aims_to_make_joseph/c3yi7d1
4. http://visiblechildren.tumblr.com.nyud.net/
5. http://www.washingtonpost.com/blogs/blogpost/post/invisible-childrens-stop-kony-campaign/2012/03/07/gIQA7B31wR_blog.html?wprss=blogpost
Labels: News World