I can be Your Next Online Sensation: Challenge #1

When it comes to visiting Orchard, everyone has their own favorite mall choice there in which they can spend hours and hours in there without leaving. After all, each shopping center at Orchard is indeed designed in different ways to cater to different people with different tastes.
As for me, out of the numerous malls and shopping centers in Orchard, I have always preferred to spend my time at Cathay Cineleisure.
Part of the reason why is because when it comes to mall choosing, I prefer those that not only has the most shops around, but also offers loads of other choices of activities to do other than just shopping. After all, I'm a guy (and guy's normally get bored of shopping quickly). So you can say I'm the kind of person who looks at the overall package an Cineleisure is just the place with it.
As part of the challenge for Cineleisure's Next Online Sensation blogging competition, I have to write about how I am gonna spend my day at Cineleisure (which is a piece of muffin since it's already my favorite mall in Orchard) and without further ado, lets go!
And of course, what's an awesome outing without an awesome friend accompanying you? For today's blog post, we'll also be featuring Tiffani, the pretty girl who has graciously agreed to accompany this forever alone blogger on a day trip to Cineleisure. After all, it would be kinda sad (not to mention boring) if I'm the only face you see throughout the entire post. Must have some pretty girl to help add colors to it, in case my *ahem* handsome face is not enough.
One of the things that I really like about Cineleisure is its wide array of food choices available. From western to eastern, fast to slow, affordable to exquisite, you are sure to find food that is suitable for your taste in Cineleisure. Which is good for food lovers like me because we won't go hungry or bored. And for the day, due to my almost empty wallet and sudden craving for Chinese food, we decided to eat wanton mee at Graffiti Cafe! 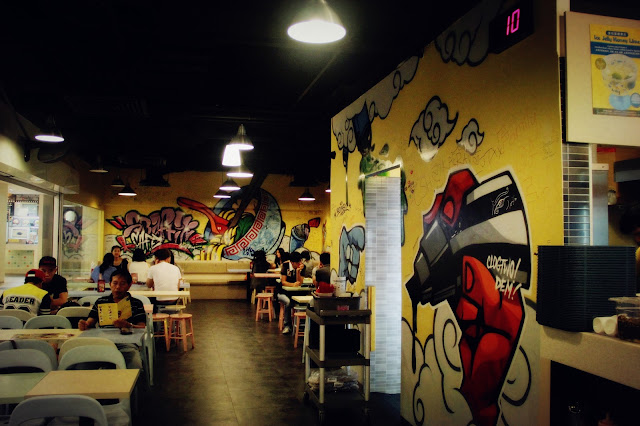 
Besides that, Cineleisure also boasts of a range of other delicious snacks, tidbits and food that you can eat as you go. Due to the fact that I'm still a little hungry after the wanton mee lunch (I have a buffalo's appetite), we decided to randomly grab some finger food nearby. And just opposite Graffiti Cafe we have...


Thinking that fries are not very filling, we ordered a small cup of cheese fries to nibble before we continue our outing for the day. Just to sort of fill up the remaining space of our stomach so it wouldn't grumble later. Both of us ordered a cup of fries each, I took the barbeque sauce I think, because we thought one cup would not be enough. Little did I know how many fries a single small cup can hold. 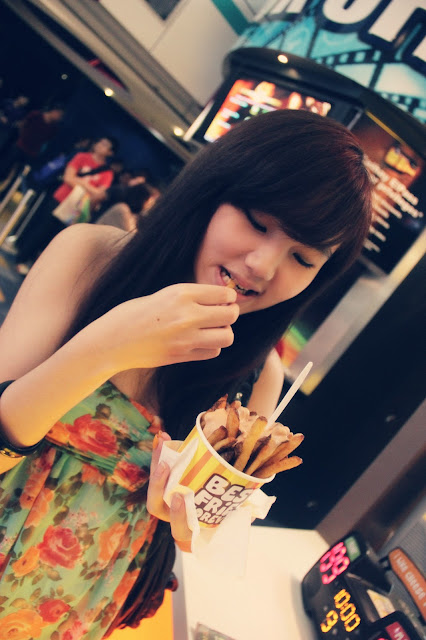 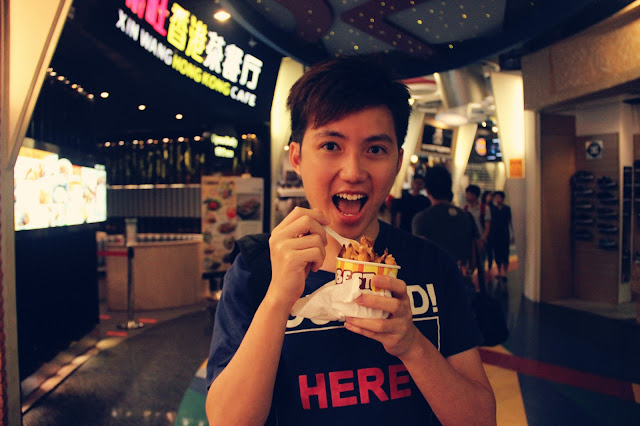 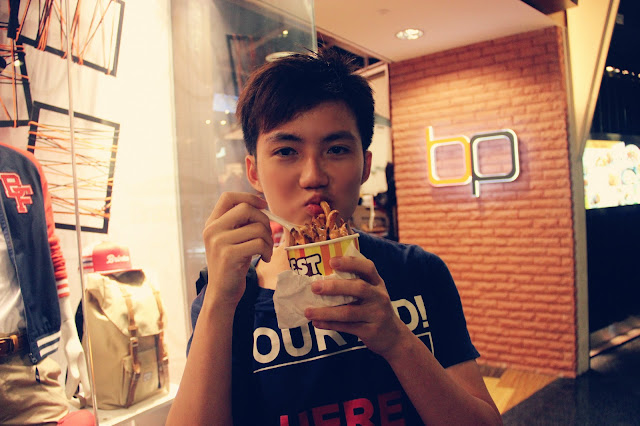 But somehow we just couldn't finish the fries! Perhaps the fries should have been the main course for lunch instead. After walking around Cineleisure for about three to four times, I did eventually manage to finish the fries (a very full meal, I must say) and decided that for our next activity, it would be best for us to just sit, chill and let the food digest somewhere.
Which is why we chose to watch movie! After all, a trip to Cineleisure would not be complete without a visit to the cinema right? Cineleisure, if I'm allowed to make a guess, stands for cinema and leisure which means that the cinema itself is part of the attraction of the place. Besides, I was still too full from all the food and wouldn't mind just chilling on the cozy cinema seats, enjoying the air-cond while watching the latest box office hits.
We settled for the new Dr Seuss movie, which if you ask me is more suitable for children, and because cameras are not allowed into the theater, no pictures were taken. You have to just imagine the cozy seats and the big screen yourself. No popcorn thanks to the fries.
After the movie we decided to do something fun for a change. While many would associate Cineleisure with shopping and great deals, I on the other hand think that it is much more than that. Tiffani did got herself some nail polish (which I did not took photo of, because I was too attracted to the movie trailers playing on a TV outside) but that's all the shopping we did that day. For starters, we visited the arcade and had some fun shooting some bad guys using some mother big guns.
We also challenged each other to a motorcycle duel, which I embarrassingly lost, because my bike banged into a wall. Stupid bike. There were also loads of other cool games in the arcade that can make the nerd in you go nuts but fearing that I would lose again, I decided to had a go at something that I'm actually good at. Computer games! Up to the ninth floor then!
For a nerd blogger like me, seeing those rows of computer is like heaven. There's Razer mouse and keyboards, computer gear that I could only dream of having, and there's every single hottest game available. Battlefield 3, League of Legends, Left for Dead 2, you name it, they've got it. Which is great because I can so envisioned myself having payback for losing the race just now.
But just as we're about to pay for the computer, Tiffani spotted a Kinect room nearby and asked whether it's possible to play Kinect instead. One thing lead to another and before I knew it, I was dancing for my life.
To cut a long story short, instead of computers, we chose to play Kinect instead, which was quite a surprise to me because I never knew such a facility existed on the ninth floor. For an affordable prize, you can rent an entire room to just play Kinect with your friends. You can choose any game you want and the rates are charged hourly. Much like karaoke (the 8th floor of Cineleisure has K-Box by the way, which I did not want to go because I am really really bad at singing).
We chose the widely popular game Dance Central 2 and it's time for the second showoff!
I must say, if you're looking for some for of exercise after a heavy meal of wanton mee and fries, these X-box Kinect rooms is so totally for you. I was panting like a mad dog after dancing for just a mere 45 minutes. Not to mention the amount of sweat all over me.
Still it was pretty fun though, battling each other out on Kinect. Not only you get to lose some weight in the process, you'll also get to have loads of fun laughing at your friend's awkward dance moves. The room is also quite spacious too, it can accommodate up til 10 I think, so you can have loads of friends chilling out together having fun playing kinect. It's certainly a very different type of activity other than the ones you normally can do in mall. I am definitely returning here for another Kinect dance off again with more friends next time.
We decided to look for a drink after that, because we sweat a lot in that one hour, and settled for the newly opened bubble tea shop, Artease. Besides being different and new, the shop has a cool interior design too! Both of us had so much fun admiring the drawing inside the shop:
All in all, it was a fun day hanging out at Cathay Cineleisure Orchard. I guess part of the reason why is due to the huge amount of activities that you can do there besides only shopping. I mean even a nerdie guy like me could find fun and enjoyable activities to do there. No matter who you are or what taste you have, Cineleisure has got the right thing for you. Besides, they're also cool too to organize a blogging competition like this! Trendy yo!
Alright, enough of the fun things already as I need to get back to doing my assignment. Do remember to support me for this Online Sensation competition organized by Cathay Cineleisure and do check out my rant of the Hunger Games gala premiere that I attended the other day here.
Last but not least, it's gonna get sensational cuz I'm gonna be your next sensation! Lame but it rhymes!
Tags: Cineleisure's Next Online Sensation, #itsgonnagetsensational, Cathay Cineleisure Orchard
Labels: Blogging Comic Competition