10 Reasons Why You Should Watch Eusoff Hall Dance Production 2012

Returning for the... lets just say the 24th time this year (because I'm no official journalist and I'm too lazy to look up the facts), Eusoff Hall is proud to present to you our annual Dance Production, Family3! And here's 10 reasons why you should come watch the Dance Production, happening at NUS University Cultural Center this 10th of February, 2012 at 8:00pm! 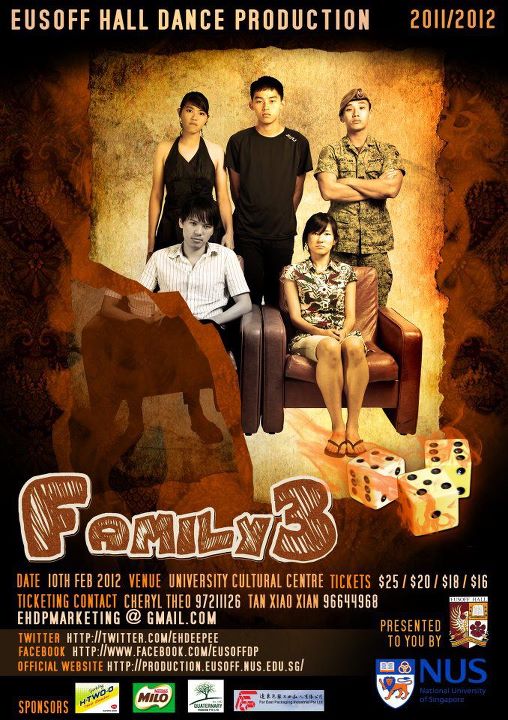 1. Because the storyline is awesome
What does it mean to be family? Where does a family tie start and where does it end? The production tells the story of how a once well-to-do family has fallen into hardship when the father lost his durian plantation business and how he turned into a hardcore gambling addict while the rest of his family have to resort to desperate means to keep the family afloat. And when he suddenly died in a car accident, all his children refused to attend his funeral out of resentment for their father, despite their mother's desperate pleas.
Using a series of dance and powerful acting, this is one story that one could relate to as we all have a family and it makes us ponder how much do we really know about our family and what does family really mean. A heartwarming story that is filled with nostalgia, sadness and love. 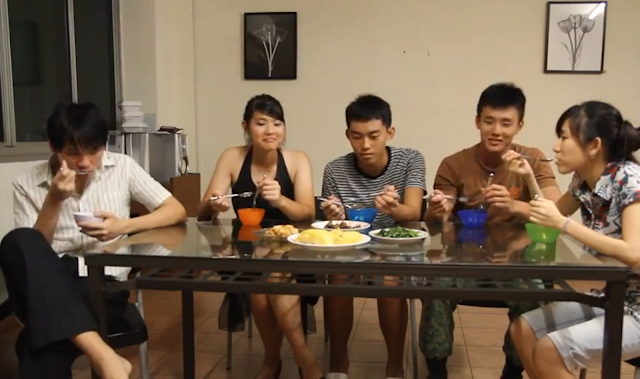 2. Because there's dance and drama and the combination is awesome
While most clubs or halls in NUS usually choose to focus on either dance or drama for their annual production, Eusoff Hall is one of the few places in Singapore that is ambitious enough to throw in both dance and drama in one production. Which means that not only you get to see acting on stage, you will also be able to catch a series of awesome dances too, 8 in all.
Not only that, this year we even have one section that features a cappella singing. That's like buying a 3-in-1 ticket where you can get the best out of dance, drama and singing all at the price of one. So not only you get to experience an awesome performance, you get to enjoy an awesome deal too!
3. Because it's on an awesome Friday night
And there's no work tomorrow! So why not indulge in some fine appreciation of the arts together with your friends? It's good try break away from the routine and watch something awesome like the Eusoff Dance Production once in a while.
4. Because the ticket price is cheap
Aside from having the opportunity to appreciate the arts, you don't have to pay as much too. While most shows in places like Esplanade cost a bomb, Family3 tickets only cost from SGD 18 to 25, which is like 3 to 5 meals budget. Affordable even for a primary school student. Nothing like feeling like a sir at an affordable price.
5. Because the poster is awesome
Scroll up at take a look at the poster. It's produced by a student. And I'm sure you would agree that the poster looks professional and different from the usual student made posters you can find anywhere which mostly only have words. And even if the poster can be so awesome, imagine how much more awesome would the actual show be.
6. Because if offers you a glimpse of the other side of university life
Ever wondered what university life is about? Think that it's all about studying or partying? Think again. Family3 offers you a glimpse of the another side of university life, of the colorful life that we have besides sitting in the library memorizing facts or rushing our assignments. Come and be a part of the vibrant side of university life through Family3!
7. Because it has mahjong and durian inside it
Mahjong and durian, two of the most enjoyable things in life. What more can you ask for? 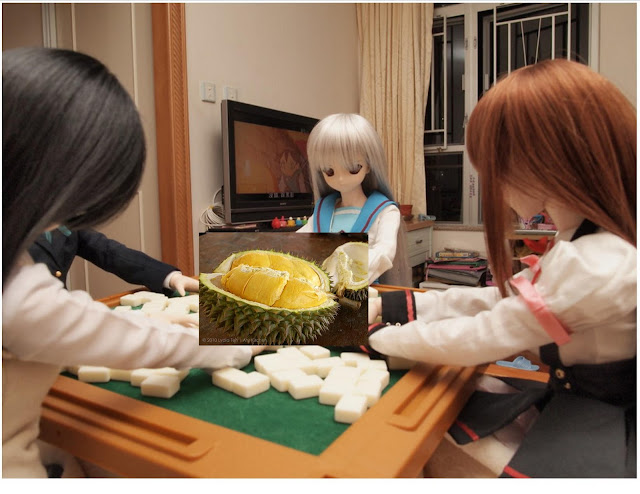 8. Because you would be supporting a good cause
Ever thought about doing charity but couldn't find the time or energy for it? Fret not because 100% of the Family3 profits would be going out to charity. So in addition to having a great time, spending some quality time with your friends/family and watching a great show, you would be giving back something to society too. I mean, what kind of charity act would give you the privilege to watch a show? It's like killing two birds with one stone!
9. Because all the students have worked so hard for it
From the producers to the directors to the designers to the backstage crew to the performers, all of us had put a lot of hard work in preparing the show since last year and the only wish we have is a full house show. Would you help us realize the dream please?
...and last but not least,
10. Because Lukey is handsome is performing in the show
You know, the famous blogger who won loads of stuff, got featured in Asia News Network and came to be the finalist for the Singapore Blog Awards? Not forgetting that he's freakingly handsome too? How could you not miss the chance to see him dance? I mean he alone can be sufficient reason enough to watch the show. Lukeyishandsome wor! It's not very often you see him perform you know.
So what are you waiting for? Grab your tickets now before it's too late to catch this awesome annual production. It only happens once a year you know.
To get your tickets, simply visit http://production.eusoff.nus.edu.sg/ticketing.html, choose a seat that you like and contact either one of the lovely ladies in charge to place your order. Yes, I mentioned lovely ladies in charge. So grab your tickets before it's too late! Alternatively you can also place your ticket orders with this handsome blogger here, depending on your preference. See you at NUS UCC on the February 10th, 2012!
Labels: Advertisements Eusoff Hall Happenings