I got three stalk of roses today. 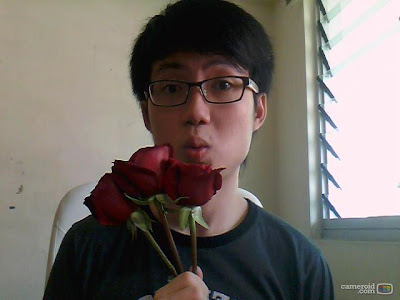 No, not from screaming girly eyed fans of mine because I have none, but rather from a group of Film and Media Studies students from Ngee Ann Poly as part of their assignment. Now when I first received the email from them asking me to appear as a guest on the show, I first thought that it would be a small production with maybe one or two video cameras like what I usually do in EusoffWorks.
Little did I know that there's one mini Mediacorp-like studio inside the Film and Media Studies building (I say this because the studio reminded me of the the Mediacorp one that I went to for the BlogTV.sg shoot) and the production fully mimics those at the real TV shows. There's three cameras complete with a room for editing and stuff like that with more than 10+ people involved. Not to mention that makeup is of an utmost importance. And I thought my little experience shooting a short film with a DSLR camera is gonna land me a job in the industry when I graduate. Time to reconsider to my backup plan.
Had I known it would be so big, I would have worn better for the shoot. So much for "I think a t-shirt and shorts would be enough for the occasion". And guess what? Xavier Ong was the second guest! It sure was awkward judging from what someone told me today. I guess he's still not very happy with the last blog post that I wrote and I have to admit, perhaps I was being too judgmental. And when you got off the wrong footing with someone, it's hard to undo the damage. Well, that's something I could say next time if I'm lucky enough to appear on another show.
Still, I must say this was another eye opening experience for me. I don't know if it's me or what, but somehow I find Singapore polytechnics to have a better environment and design than universities in Singapore. The scenery and decoration are certainly much nicer and cooler if you ask me. In NUS, some corridors reminds you of the hospital while NTU looks like a jungle in some places. Oh well.
Besides that, I think I also gained a few levels in the hold-your-stomach-while-keeping-a-straight-face skill from today because my stomach decided to play a prank on me while we're about to go on air. I thought it wasn't very polite to ask for the toilet when everyone's rushing around worrying about the production so I just kept quiet and smiled while there's a hurricane going on inside my stomach. Not an easy task you know. The moment they let me off, I immediately rushed for a toilet. Note to self, please remember to clear anything you have in your stomach before going for anything major. You'll never know when you'll ever have a chance to see the toilet again.
Gross stuff aside, it was fun! They gave me a card and three roses as a token of appreciation and I must say it was quite a pleasant surprise indeed.
Thanks again P203/1. Time for me resume my dragon killing
Labels: Blogging Random Rantings