I Met A Salesman Today

Remember the other day when I said I received a mysterious call from a person who claims he is representing a company and would like to rope me in on this secret project he's doing? And remember how I mentioned that the entire thing sounds awfully suspicious because the guy wouldn't tell me what's the project about and who referred my name? I mean, what's with all the secrecy anyway?

As far as I remember, in the corporate world, when people refer you for something good, lets say a better job prospect, they wouldn't normally want to keep their name a secret right? After all, what's the point of referrals when you don't even know who is the referral?

But as an anonymous comment suggested (on hindsight, trusting anonymous comments perhaps is not such a good idea after all), what could I possibly lose by going there to listen to this guy? Well, for starters, I lost 30 minutes of my life and I've gained nothing in return. Maybe even more time lost from Googling what the person have said.

Turns out that this secret project that the guy was so hyped out was nothing more than than this concept called the Pro-sumer Power! invented by this so called guy called Bill Quain who allegedly owns a Ph.D., as how it was plastered across the book this guy whom we shall call W gave me.

Like all professional salesman, W first started by making small talk out of my life. What am I doing now, what's my aspirations and so on, attempting to appear friendly while digging up information about myself that he could use to persuade me later on. For example he asked if I liked helping people when I said I was majoring in Psychology and from the looks of it, I'm guessing if I said yes, he would probably say how the thing he is going to show me later would help people. Like how he asked me if money is important to me and would I want to make lots of money in my life.

Taking the hints, I replied all the questions ambiguously to not give him any upperhand and to really see what he is really trying to say.

After about 10 minutes plus of asking me about my life, he finally took out a pen and paper, the classic tool used by salesman to deliver their opening pitch. He first said how 90% of the wealth is owned by 10% of the population, something which Sociology mentioned about when Karl Marx talked about Capitalism, so nothing surprising there. He then goes on saying about how these 10% of the people have a system that keeps them rich and suddenly it feels as if I'm listening to one of my Sociology lectures again. But that's where all the similarities end.

He then said that this group of people he's representing have uncovered the secrets behind the formula that makes the 10% people rich and how he would like to share this secret with me so I can be rich too. The above book was then promptly passed to me in which he ask me to read it and get back to him after I read it.

Well, if he had given me that book 3 years ago, I might have taken the bait but after so many classes in NUS that keeps drilling in the importance of critical thinking, I couldn't help but be suspicious of the book the moment I turn it open.

For starters, if you are really a good writer, you don't have to plaster such a big Ph.D. in front of the book to indicate who you are. Doing that is what psychologists call peripheral route to persuasion, in which you try to convince people based on who you are, not the kind of argument you are making. It's like saying "Hey, I have a Ph.D. so what I'm saying is most probably going to be true". But hey, having a Ph.D. doesn't mean you're always right (professors routinely have their researches criticized) and using that kind of logic is a cheap way to convince people.

And secondly, I question the way the entire book is written. From the start of the page to the end of the page, this Bill Quain is trying to tell you how awesome his way is without really offering a solid proof on how his pro-sumer way will work. For example, he offered this chart as a way to convince readers that you'll surely be earning loads of money from this "pro-sumer revolution" in no time. 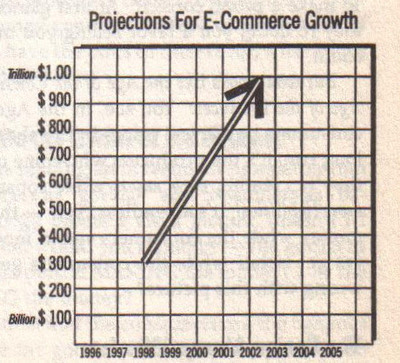 Looks really nice right? All you have is up and profits. What he fails to mention is that where did he got those figures from? Based on what calculations of whom? What are the margins of errors? How much of that projection will be available for us? Without offering a solid research to back the graph up, that graph is nothing but a hollow dream. Heck, even I can do something like that.

Thirdly, a quick google search of "Bill Quain" reveals that he is one of the founders of Amway or Quixtar, which probably means that he is no independent or neutral researcher and the book might probably biased to a very large extent.

Besides, if this pro-sumer thing is really that powerful, poverty would be eradicated by now and our world would be a utopia by now. The only problem is that it hasn't. That said book was written more than 10 years ago and by the looks of it, I don't think this pro-sumer revolution is working out well. Also, if you take a look at Amway members, how many of them are truly rich like how they say they are anyway? If you ask me, I think they're the perfect epitome of what they criticize in society because from what I see, it's like 10% of the elite members who control 90% of the wealth while 90% the normal members only have 10% of the wealth to share.

But then again, I could be wrong. Perhaps you can really be rich true this pro-sumer revolution which is over 10 years old already. What I don't like about this whole thing is the whole secrecy surrounding it and the supposedly perfect plan to get rich. In this world, for something to be real, it must stand up to empirical testing and questions, not for it to be shrouded in mystery and myth. Those type of things belongs to the fantasy land anyway.

In order for me to truly accept something like Amway, there must be reasonable proofs that supports what Amway claims. If all we depend on are words of others and an alleged Ph.D., then perhaps more doubts should be warranted. Like the old people say, when it's too good to be true, it probably is.
Labels: Rantings Work