What do you get when you cross the international superstar Wang Lee Hom, Brand's Chicken Essence, NUS's University Cultural Center and a group of talented musicians? A great evening of great music that will leave your jaws wide open of course. Not to forget a star struck blogger too.

Thanks to Brand's Chicken Essence (I remember my mum always made me drink tons of it when I had to take my O' and A' Levels) I had the chance to attend the 2011 showcase of Brand's Music Changes Lives competition featuring performances by the top four finalist, Spruce, Michelle, Yue Ling and Andy, with special guest performances by Wang Lee Hom and Tor+ too. 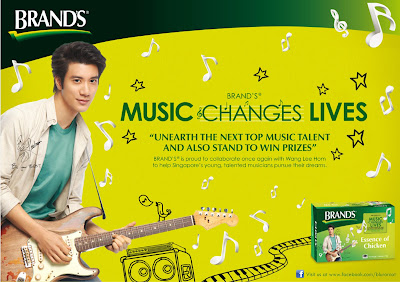 I have to admit, even though Lukey here might be a awesomely handsome famous blogger, I have not really met any famous celebrities up close before, what more attend a press conference by them. To be honest, Lee Hom isn't exactly who I thought him to be because he is actually quite insightful. During his press conference, he talked about how success is very subjective and how he doesn't measure success through the amount of recognition or awards one achieves. Rather, he says that as long as you love what you're doing and you're putting enough effort in it, that is success in its own rights too.
Which kinda struck me because I can totally relate to that. As a blogger looking for fame, awards to me is really important because for me, it is a measure of success. The more awards I get, the more successful I am as a blogger. At least that's what I thought at first. What he said challenged my initial preconception about the meaning of success. 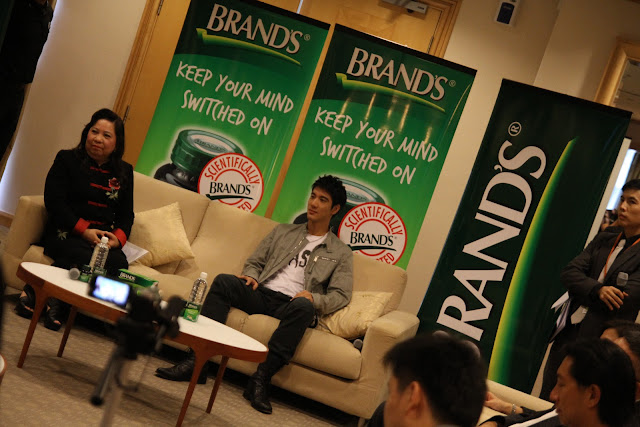 Besides that, I also find Lee Hom to be a stern person when it comes to his principles. He strongly believes in forging your own path to success in life and he also advocates constant improvement to yourself. From what I see, he's a pretty strong willed person alright. Sort of like me in a way. Except that I'm not as famous as him and my music talent is near 0. 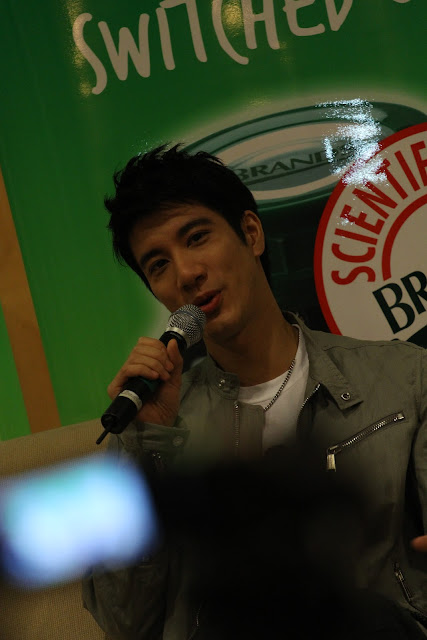 And I didn't knew Lee Hom grew up in the States! Couldn't believe that I was sitting there dumbly thinking that he's from Taiwan and wondering why his command of English is so good.
The press conference aside, it's time to move on to the highlight of the night, the performances!
To give a rough background of the story, Brand's organized this competition a few months back to spot Singaporeans who are musically talented and to help them further their musical career. After months of intense competition which included making a video and voting through the online website of STOMP, four individuals were chosen as the winners of this year's Music Changes Lives showcase. They are none other than Andy Chong, Michelle Soh, Yue Ling and Spruce Teo. Other than being able to perform live with some of Singapore's famous artists and also Wang Lee Hom himself, they were also awarded a total of 3000 dollars in cash prize and another 2000 dollars to further their musical dreams. If only Brand's had a Blogging Changes Lives competition.
Enough talking, time to kickstart the show!
Andy Chong took the lead in the night's showcase together with his band by belting out the song "Let's Go" on his electric guitar. And man, did he have that cool rocker look during the entire performance.

Michelle Soh was next in performing a classical piece called "Schubert's Impromptu Op 90 No2." using a grand piano. Though I'm not really a fan of classical music, I can see that she is really good though. Just by looking at how fast her fingers move across the piano is enough to make my jaws drop already. And the music? Superb.
Spruce was next with his saxophone and did I ever mentioned that I have a deep admiration for anyone who can play a saxophone? Not only was Spruce good, he was crazy. His rendition of Alicia Key's "If I Ain't Got You" held me spellbound throughout the entire performance. And his hairstyle rocked too. If only I can style my hair like his.
Yue Ling was the last to go for the solo performance with her violin and like the previous three, she is nowhere short of talent. Her rendition of "Beethoven Virus" was simply splendid. I also liked how she performed with her violin on stage. It was elegant and captivating. Sort of reminded me of the famous female Asian violinist that I can never seem to remember her name.
In fact, four of them were immensely talented on my opinion. The music pieces that they played were on par with those professional ones. If they have music online, I would be one of the first to download it. All of them are star materials in fact. Best of all, I got to enjoy their performance for free. Too bad most of them are younger than me though. It's quite sad if you were to compare to me because the only instrument that I know how to play is my toy guitar. Maybe I can ask one of them to be my mentor. Then maybe I can join the competition next year and win the money too :p
One of Thailand's star, Tor+ was also there to perform as a guest star. He played a special version of 月亮代表我的心 (Yueliang Daibiao Wo De Xin), a classic music on the grand piano while singing to it. And he's good. While adding his own flair to the music, he has also very good control over how he plays the music on the piano. He can go soft, loud, fast and slow with relatively less effort throughout the music. In fact, it seems like his fingers are dancing on the keys itself. And the part I like most about his performance? How he enjoyed himself throughout the whole show
In addition to Tor+, the showcase also featured collaborations of local artistes with the four finalists too. We have Jonathan Leong, Tabitha Nauser and Taufik Batisah appearing on stage together with the four finalists performing their collab pieces, performing songs like 'Someone Like You' and 'Superstition'.
Like I said, the four finalists can be accomplished artists in their own right. The almost flawless collab pieces between them and the local artistes was really fun and enjoyable to watch.
And of course, last but not least, the showcase also featured Wang Lee Hom (girly fan screams) too as part of the evening's events. He delivered three songs for the night and much to my delight, two of his three song choices are my favorite Lee Hom's songs. One of them was 你不知道的事 (All The Things You Never Knew) while the other one was his latest, 依然愛你 (Still Love You). The other song is one of his classics, 改变自己 (Change Me).
Don't tell anyone this, but halfway through his performance, while I'm taking his photos, I actually found myself singing along to his songs. Which is quite embarrassing if you can imagine a photographer who is singing while he has a camera stuck to his head. Pretty much look like an idiot if you ask me, but still, it's my favorite two songs!
It was awesome night alright. I thoroughly enjoyed myself throughout all the performances and I must say, Singapore is one talent filled place indeed! The four finalists really deserve to win the prize and I can see them going a long way from here. Watching them fulfill their dream in a way inspires me to go chase down my dream too! And congrats to Spruce, Michelle, Andy and Yue Ling for the awesome jaw drop til floor performance and for winning the competition. Psst, I'm still looking for a mentor!
And I would like to thank Brand's too for the invite to this event!
And as Tor+ said, "Don't Give Up!" x100 times!
P/s: Dear Brand's, if you ever organize a blogging changes life competition remember to invite me kay? :p And more pictures on my Facebook page! http://www.facebook.com/lukeyishandsome
Labels: Happenings Life Updates Pictures Singapore