When Nuffnang first announced through Twitter that they will be contacting the selected finalists of Nuffnang's Asia Pacific Blog Awards (NAPBAS) through the phone two days prior, I must admit that the piece of tweet made me quite nervous at first. Nervous to the state that I was constantly sitting beside my phone, waiting for the call to come. For two days.

Although I knew that it was almost statistically impossible for me to be selected as one of the five finalists of any category, there was a part of me hoping that perhaps history would repeat itself like how it did for Singapore Blog Awards. In my mind, I thought to myself that perhaps I was one of the finalists after all, it's just that I have mistakenly given a wrong phone number and the Nuffnang people are having a hard time trying to reach me. Perhaps.

Sadly, reality did not turn out as I expected. As the hours roll by, I see more and more people posting blog posts of joy about them being the finalists for NAPBAS while the only text that I received was from my mobile operator reminding me to reload my phone.

As much as I hate to admit it, lukeyishandsome.com did not make the cut.

Still, I don't blame them though. The blogs that made it into finals are really good blogs. In fact, five of the blogs that I'm following were actually chosen They include Xiaxue, CheeChingy, Kenwooi, Kenny Sia and Cheesie. All are good blogs with huge following. And I think they deserve to win also. Which is why I can't really complain much. I just think that perhaps there should me a category called the Noob Bloggers for people like me. 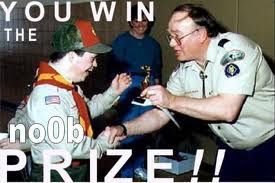 That just means that despite my initial optimism, this blog here still have a lot to improve on. Maybe it's my writing style, or perhaps it's the layout. Or maybe it's the lack of traffic. I don't know. The only thing I know? Try again next year. Perhaps I'll have better luck next time. Or hopefully by that time, Nuffnang would have added a Noob Category award.
Labels: Blogging Happenings