A friend of mine asked me in a rather surprised tone yesterday on whether do I learn anything from a module I'm taking now called Group Dynamics. I don't blame him because group dynamics after all seems like a very intuitive thing. All of us in one way or another belong to some kind of group, be it friends, schools or clubs and through our experience in those group we form ideas and theories of how groups work. Besides, there's also countless of sayings, lessons and to-dos out there in the media regarding group dynamics so why bother studying it when you can learn about it in real life?
Well, I thought about that it and I couldn't deny that there's some truth to that point, because some of the things we know about groups come from our own direct observations and experience. But sometimes, there's just something about a group that we need to observe from afar, neutrally. Not to forget that some of our theories might be distorted due to our own biases too. And that's where a module like group dynamics comes in. Because sometimes it's just better to have empirical evidence to back us up and to show us something that we would not see from direct experience. 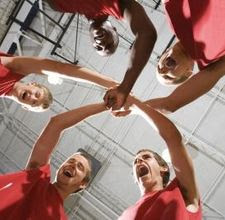 Take today for example. The lecturer taught about intergroup relations (about how a group deals with another group) and there's quite a few things he taught there that were counter intuitive and quite interesting to think about it.

One good example was how us humans have the tendency to view the groups we're belonging to more positively than the other groups or as how psychologists would call it, the in-group and out-group bias. It is a very well documented phenomena, occurring almost everywhere in society and for every kind of group that you can think of. It's part of our strategy to survive and to preserve our self esteem.

Just think of any group that you currently belong to right now. It could be your school, your country, your race or a sports club. How do you view your group as compared to any rival groups? Take me for example. If I think of my current group as NUS, how would I view NTU students? Or how would I view Singaporeans from my Malaysian perspective? Or it could be how I view Westerners as an Asian. Perhaps how as a dancer I would view people from the sports side. Of course, the possibilities are endless.

However, one thing thing that is certain is the general characteristics that we assign to groups that we're a part of, our in-group, versus groups that we're not part of, maybe even our rival groups, the out-groups. I'm sure that as normal humans, we will generally think of our in-groups in a much better light than what we think of our out-groups. For example, as a Chinese, I could think that all Malays are lazy or as a male, I could think that all females are too emotional. This tendency to view our in-groups as more superior as compared to the out-groups, the in-group out-group bias, is where our stereotypes, racism and prejudice comes from.

And as research has shown, most of the time the stereotypes and beliefs that we may hold about the out-groups are not true. It's merely a product of social categorization process. When we categorize people and start dividing them into groups, situations such as in-group out-group bias would start to take place and that would then lead to discrimination, prejudice and in some extreme cases, even genocide when we allow our bias to roam without control.

As how scientists would put it, there's really not much differences among us humans as one species if you were to examine closely. There's not a color which is smarter than the other nor a race more superior than another. All these are a mere product of a human process where we tend to exaggerate our differences based on arbitrary categories such as skin color, nationality or race. In a way, it's like one major flaw in our human design.


Listening to the lecture got me thinking about a lot of stuff that is happening in my life that is a evidence of this in-group and out-group bias. How the sports and culture people dislike each other in my hall, how Eusoff and Temasek view each other as mortal enemy, how the different faculties in NUS see each other to the more global level like how racism is so widespread in Malaysia.

When you come to think of it, all of our beliefs that it's the others who suck can be simply boiled down to how we categorize ourselves. By simply drawing a boundary between two different groups of people and emphasizing the difference among them, one can then simply sit back and enjoy them fighting each other out. Take Malaysia or Singapore for example. Just by assigning you a race when you're born, I can get you to hate people who are of a different race than you for the rest of your life, even though both of you may share a lot of similarities together like coming from the same country. Like I said, it's one big flaw in our human design.

Heck, I don't even need to go as far to use race to get people to fight. Research in group dynamics have shown that even groups are assigned according to a toss of a coin or the color of the shirt, categories which have little meaning in real life, one can get people to exhibit discrimination and prejudice among the groups. Bear in mind that it's merely a toss of a coin and the participants have never met before prior to the experiment.

In a way, you could say that to eliminate this kind of in-group out-group bias, you don't have to go far to implement 1000 policies or laws to discourage racism or discrimination, all you need to do is to eliminate the categorization. Erase the boundary that we use to differentiate ourselves. Emphasize on the similarities. When we lose the ability to separate ourselves according to distinct categories, when we see all of us as the same, racism and discrimination will disappear naturally. You don't need elaborate planning or anything, all you need is to eliminate the tagging and categorization.

To use back the Malaysia and Singapore example, to eliminate racism, all you have to do is to eliminate the notion of race and to emphasize that all of us are the same and belonging to the same nation. There should be no differences among us. Erase the boundaries among the races and make them permeable. And unity will follow suit.

Furthermore society is an ever changing place. We cannot move forward without radical changes. Think of how Galileo Galilei went against the church with his notion of how Earth revolves around the sun for example. Imagine the uproar he faced during that time. Just because something has been like that for a long time doesn't mean it's correct. We need to constantly challenge our thinking in order to move forward and progress.

The same thing can be said about racism, discrimination and prejudice. In order to achieve real unity, you have to eliminate all chances of social categorization. Race, for example, is a good place to start.

A classic example of how social categorization ruins lives: