First Exam Of The Sem

How my first final exam of this semester went today: 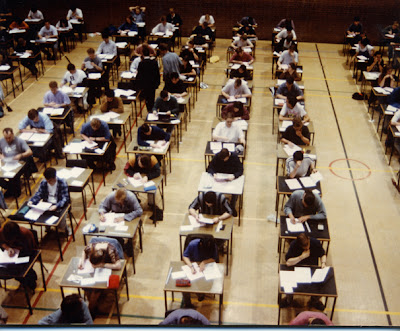 1. Finished reading the articles yesterday, woke up one hour before the exams after snoozing the alarm 4 times, so much for wanting to wake up early, and can't help myself but to feel a little dread about what's in store for me. After all, it's a two hour exam where you need to write three essays. THREE!
2. Reached the examination hall early. Maybe I should have snoozed the alarm for the fifth time too. The awkward moment when you don't have any friends taking the same module as you and you're standing there alone wondering what to do
3. Time to enter the examination hall. Muttered a silent prayer hoping that everything will be fine and I won't black out, faint or have diarrhea halfway through the exam
4. Waiting for exam to start is pretty much like the F1 racing game that I used to play. We're all the like drivers, standing before the starting line with our pens, waiting for the examiner to give us the go
5. And we're off! Students began flipping the question paper, devouring the questions and then began furiously writing, or vomiting, out the facts that they have painfully memorized over the past few weeks before the exams. Kinda reminds me of a rat race though.
6. Nonetheless, I'm a rat myself. So I began furiously writing for the first question too. Facts and arguments flowed through my fingertips and unto the paper. I was feeling confident alright. The long sleep I got worked as my brain was working non-stop to generate points for the essay. Pretty soon, I hit the  four page quota allocated for one question. Two more questions to go
7. Now if an exam was like an F1 race, I'm like the driver who first takes the lead but quickly runs out of gas in the middle and as time passes by, I get more and more left behind. When I was awesome for my first essay, I found out that I don't have enough brain juice left for the second essay. No need to mention about the third paper already
8. Arghh... F**k this shit, my brain says, while my hand continued writing using whatever brain juice I had left to continue on. 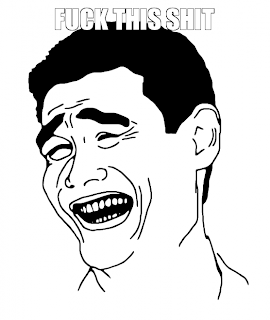