Once upon a time, because all good stories start with once upon a time, there lived a cat. Not just any normal cat that you usually see, but one who walks on two and is able to speak at the same time. That's right, a walking, talking cat just like me and you.
This particular cat that we're talking about came from the a place Elsweyr, which pretty much sounds like Elsewhere because it couldn't be coming from where you are now as cats in your world doesn't speak and walk on two legs. Now this cat, let just call him Catty, like all cats, loves to explore too and while exploring the country one day, was suddenly ambushed and captured by humans. In the chaos, he did not have time to defend himself and was soon knocked unconscious by his attackers.
When Catty finally came to his senses, to his horror, he found out that he is going to be executed along with other few criminals. He tried explaining to the guards that this was a terrible mistake because he had always been a good cat and the worst crime that he had ever done was stealing some extra cookies from the cookie jar. He can't even bring himself to kill a mouse so how could he have committed a crime to warrant a death sentence.
Sadly, the guards would hear none of it. After all, Catty is just a cat and humans never respected animals, I'm sure you can agree to that. His hopes for escape was further dashed when one of the criminals who wanted to escape was brutally killed before he could mad it out alive. Sensing no hope of freedom, he quietly resigned to his fate and muttered a silent apology to his family back in Elsweyr for not being able to fulfill their hopes of seeing their son graduate with a degree.
To make matters worse, out of the 10+ criminals who were there, Catty was second in line to be executed. Life just isn't fair. As Catty stood there nervously watching the first guy die, he can't help but wonder what he did to deserve such an early death. After all, he's still a virgin for pete's sake. How could they have the heart to kill a guy who has not even kiss a girl before? And most important of all, Catty did not really want to die. It's just too soon.
What Catty forgot however, was that unlike humans, cats have 9 lives. While the first guy was well on his way to heaven already, the gods have no plans for Catty's death picture to be all over Facebook as part of anti-animal cruelty campaign yet. As the executioner took his position and as the inevitable is going to take place, one of the most bizarre thing that you'll ever see happened.
First there were thundering roars above the sky. Next, one could see a large shadow blocking the sun. And before anyone knew it, a dragon actually appeared and landed near them. There was a moment of silence, which seemed like eternity back then as everyone was shocked by what they are seeing but before they knew it, the dragon let out a roar and flames were soon shooting out from its mouth. A dragon, yes, the giant lizard with wings that shoots out fire had appeared out of nowhere and began attacking all of them, prisoners and guards alike.
Using the commotion caused by the dragon's attack, Catty quickly ran to cover and cut off the ropes that were tying him. Around him, structures were being destroyed by the dragon's fire and people were hysterically trying to run away from the dragon's rage. The few guards that tried to fight the dragon did not stood a chance at all as some of them were roasted alive while some are mercilessly picked into the air and thrown from a few hundred feet from the ground. The scene was like one of the apocalyptic movies that you normally see in cinemas.
Somehow, perhaps thanks to his 9 lives again, Catty managed to evade the dragon's attention and along with a few other people were able to reach the keep of the city. While the chaos continued outside, Catty and those few searched for an alternative way out. Using an underground tunnel in the keep, they exited from a nearby mountain, away from the dragon's notice.
While Catty was lucky enough to get away with his life twice, he soon found out that his captors had taken him to a foreign land which he knew nothing about. He have no idea how to return and as one of the survivors put it, he have no choice but to figure that out on himself while starting a new life in this unfamiliar land. And he also decided to take a picture of himself too as a reminder of all the events taking place in his life. 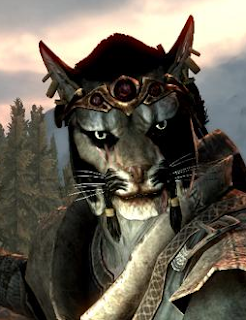 He also realizes that he should stop playing Skyrim.
Labels: Gaming Random