I was surfing the web on a lovely Saturday afternoon when I saw news going around the internet about people wanting to picket (another word for protest, but in a manner that says "F*** You, glad you died!") Steve Jobs funeral. My first guess was Microsoft sent them but after snooping around a little more, I found out that instead that it was a church that was behind this (thanks Alvin Lim for the post). Funny. I never knew Steve Jobs pissed off Christians. All I knew that he was a Zen Buddhist Monk. So thus my curiosity was sparked and my whole day was spent "researching" this whole incident (sounds so much cooler when I used the word research).

Calling themselves the Westboro Baptist Church or WBC in short, this group of individuals lives on the extreme edge of Christianity, more to a cult like fashion as I would say it, basing their teachings around God's hatred, His vengeance and how He is going to bring judgement to this world. WBC members consist mostly of the extended family of the Phelps, the doctrine was pretty much written by the patriarch of the family, Fred Phelps, and they are pretty notorious in the USA for their message of hate against virtually everyone; homosexuals, Jews, US servicemen who were killed in action, youths, Catholics, Muslims... yeah pretty much everyone except themselves.

Most of their church activities involves picketing at people's funerals, holding placards saying "God Hates Fags", "God Hates America", "You're going to hell", you get the gist. They have come up with religious insensitive videos, wrote parodies of songs condemning people and basically managed to piss off everyone except their own family members. It's religious extremism to its finest.


You see, the thing about being in a cult is about how twisted the message gets. And most of the time, it's about we versus the world and how the world is wrong and only we are correct. Not forgetting the amount of brainwashing that you receive in the process.

It's sad to see how capable we humans are in evil. I don't blame them though for being who they are. As much as we would like to paint them in a negative light and as bigots, we may not realize that the same could happen to us too. You see, if you happened to be raised in an environment where you're taught from young that "XY is Z" you'll grow up believing the message as the unshakeable truth. And if it keeps being drilled into your head day after day, your whole life will soon revolve around the message alone.

The message in a way becomes the defining characteristics in your life and you derive your whole sense of meaning, identity and purpose of life itself from the message. If I were to take away the message from you, or to prove that it's not true, of course your life would come crashing down on you. After all, you've have spend so much effort, time and energy into believing "XY is Z" and having it disproved would just mean you have wasted everything that you have put into it. And that fact alone is quite unsettling if you ask me. Downright nerve breaking to be honest.

Which is why I take pity with the WBC members actually. Because for all their self espoused hatred and extremism, I'm sure deep down in their hearts, maybe in a small part, they have this anxiety or doubt that perhaps what they believe might not be true. And thinking about it would only cause them emotional stress, not to mention social ostracizing from their family (which is probably the only people they know), evident from the second video so it would be easier to just come up with additional reasons to justify your claim, no matter how weird it might sound, rather than to face the terrifying fact that you might be wrong.

Psychologists have a term for this thing. It's called cognitive dissonance and it's one scary thing indeed. In an effort to protect our self esteem and ego, it forgoes everything in the process, including logic and in extreme cases, you'll have the WBC members as a result. And when cognitive dissonance kicks in, it's pretty hard to kick it out. No matter what you try to do, people will just form additional reasons to counter your arguments and actions. The best solution is to ignore these people the best as possible and they will disappear off on their own (if you do not allow procreation, that's the only destination you'll end up at right).

What's sad is that even in today's world, people still preach hatred openly and publicly and label it as freedom of speech. I mean openly debating about something, or questioning something is one thing but speaking of hate filled with nothing but twisted logic is another. And someone wise once said that truth is something that is able to withstand questioning and doubts and it is through these questioning that you'll know whether that the truth you believe in is a lie or not. If your "truth" is not open to debate, then there's no point believing in it at all.

Which was why when I was growing up, I have always questioned my faith, much to the horror and disgust of some of my church mates. To them, the act of questioning is one of dissent and their standard answer was always "have faith". And in a way, it makes us no different from the WBC people too because they too have a lot faith in what they believe in. And they too do not tolerate dissent.

Fortunately for my parents, my curiosity did not turn me into a full fledged rebel because for all the points the other sides have to offer, I find them lacking too in one way or another. Bigger questions like what's the whole point of this whole universe and afterlife seems to be answered quite ambiguously by the atheists. So I'm kinda hanging somewhere in the middle now. People like WBC keeps me wondering whether there's a God in the first place or not.

Me aside, I guess it's kinda dangerous when you leave your beliefs unchecked. Cult groups like WBC are one prime example. No matter what you believe in, it sometimes good to just like think whether it's rational or not what you're believing in. Can you offer contrary evidence to it? A truth is never a truth if you cannot prove it wrong. We have not come this far in life just blindly following some truth that others tell us. If curiosity was not allowed, we would still be living in caves worshiping lightning and thunder today.

Sure, questioning some deep seated beliefs may cause rejection but sometimes, we may just need to stand our ground and draw our line in what we believe in. As Louis Theroux concluded, "What emerged to me was I was seeing a family that through its own tortured logic was involved in a long process of tearing itself apart, while denying at every stage what it was plainly doing. Many of their activities are deeply repellent and yet it is also possible to see the Westboro Baptist Church as human beings who, in a weird way, are victimising themselves along with all those they picket.".

Still, it's sad to see how it only takes one man's homophobic hatred (I'm speaking of Fred) to destroy the lives of so many people (I mean his family). But I guess that's how cult works. To ensure that your allegiance is to the group, they cut off all your social contact to the world, paint everyone else as enemies and punish those who dare oppose in the group. God bless our world. 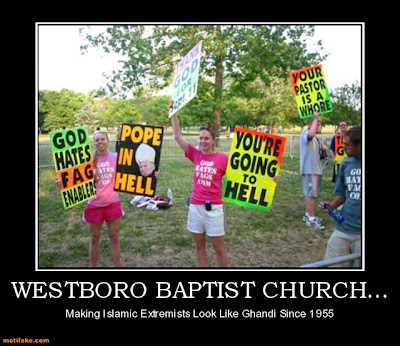