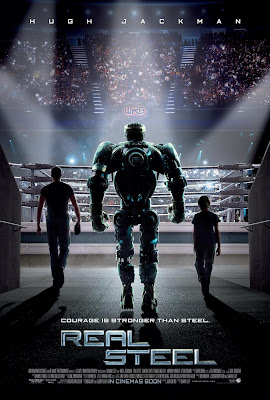 After losing my chance of watching this movie with Nuffnang (somehow my post wasn't good enough as compared to other one liner posts), I never thought that I would be able to find time to watch this movie by myself. Going to the cinema just takes too much time. But somehow, fate intervened and I got to watch this movie today. And like any other good bloggers, a review post is a must, though it might be a little late since the movie has been there for quite sometime already. And with this being a late post, it's gonna be filled with spoilers so beware!
Story-wise, plot-wise and character-wise, I think the movie only fares averagely. There's just too much pause here and there and in between the robot fights, you feel as if everything is just there for the sake of being there. There's not much of a smooth continuity though throughout the whole movie. Sometimes I feel that the conflicts among the characters are a bit forced and it doesn't really deliver the tension that it was supposed to create. I mean, I don't really sympathize with Charlie and I started to hate Max somewhere along the way so yeah, the storytelling doesn't do them a lot of justice.
What I like about the movie, despite the average storytelling, was the theme portrayed throughout the 127 minutes. I don't know if you've noticed but as I watched Max's optimism versus Charlie's cynicism, I can't help but to feel as if what is happening between them is a metaphor for what is happening in our lives. In a way, I think that Max is representing what all of us used to be once upon a time. Young, full with optimism and willing to take on the world. We had the biggest dreams, believing that we can achieve it if we work hard enough. Loads of optimism, we had.
But as we grew older, disappointments, obstacles and failures start setting in. From the vibrant Max, we become  cynical Charlie. We start to lose hope, become jaded and lost track of whom we wanted to be. Instead of aiming to beat Zeus (the big unbeatable robot in the show), we are willing to settle for the 200 thousand dollars (the money Zeus's owners are willing to pay for the main robot) because we are pretty sure that we will not be able to reach that goal.
"What's the point?", we might think. "I can't achieve that dream anyway so why not just take something and be happy with it". That's what life does to you in way. It saps away your optimism. I've seen it in my friends, in my parents and even me. Back when I was young, I was so unafraid of anything, wanting to change the world but looking at where I am now, my immediate first thought to myself is "You can or not?". In a way, you can say that I pretty much lost faith and hope in myself.
It was as if the film was asking what happened to the once younger me that wanted to take on the whole world. Where's your Max and how come you're Charlie now?
Building on to that, another thing that I liked about the movie was its ending. Some people might not like it though because in the end, Atom (Max's robot) did not win the match and Zeus was still the unbeatable robot. But in a way, the victory of Zeus sort of serve to make the whole movie more realistic. And what I think winning isn't the whole point that the movie was trying to say. It's just like Charlie's boxing match once upon a time with the boxing champion dunno-what-name (I forgot). He was expected to not last one round but he went on to fight 12 with dunno-what-name. He lost eventually, but not without making a name for himself that day.
And I think the message here closely corresponds to our life too. For some people, winning is everything to them. It's either all or nothing. There's no such thing as second place because it just mean that you're the first loser. But what I think the movie is trying to portray is that life isn't always about competing with each other to prove who's the best. The better way is to compete against ourselves and push ourselves to the limit. Winning isn't important, but knowing that we have stood there and fought valiantly, outperforming even our own standards is the sweetest feeling of all. What matters more is the process, the experience of everything. You don't need anything to prove to anyone, you just need to prove that yourself that you can. And that's the most important of all.
Real Steel ain't the best movie in terms of cinematography and other stuff but it sure is deep, once you start thinking about it. The message alone deserves a 10/10. And the robot fighting scenes sure are cool and not to mention exciting. It's even more exciting than the Lin Dan versus Lee Chong Wei badminton match. A 7/10 for the whole movie, 10/10 for the deep parts.
Labels: Movies Rantings