Rain or shine, the iPad goes

I have decided. That this time, my iPad goes no matter what. Yes, after the first not very successful attempt of trying to give away my now dusty iPad, I figured that I was overestimating myself in setting a minimum limit for participation. So yeah, this time, even if there's one person participating, I would still give out my iPad. In any way it's still better than letting it sit in my drawer unused and forgotten. Besides, I wanted to be fair to those who actually wrote a post the last time (you can now recycle the post! XD). So, fancy yourself an iPad? 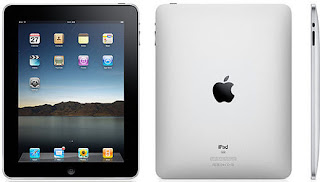 Here's what you need to do.
1. Write a blog post about why you want an iPad. Be as creative as you can be. It doesn't have to be true or factual. It's a blog post. Let your imagination fly.
2. Include a link of this site by the end of your post saying that you're joining this competition and telling your readers that they can win too in your own words.
3. Post the permalink of your post to Lukeyishandsome.com's Facebook Page so I could check out your post (you may need to like the page first).
4. Cross your fingers and hope for the best. Judging will be according to the most creative post (so you don't have to go around begging friends for likes) that makes me got WTH or LOL. First 5 people who post the link first would get additional 5% to the overall marks, meaning 95% would be for creativity and 5% would be for the 5 early-birds.
5. Competition ends on October 27th, 2011 and results will be announced on October 31st, 2011. There's no restrictions on where you can participate from meaning wherever you are, you can win it. Except Antarctica because FedEx doesn't go there. Yes, I'll FedEx the prize to you, provided that you are not staying in Singapore or Ipoh, Malaysia. For the other 2 locations that I've just mentioned, to save time and money, I'll just arrange for a meetup to pass you the pad.
So yeah. That's about it. Simple and easy. Even if there's only one link posted on the Facebook page wall (http://www.facebook.com/lukeyishandsome), the prize would go to that person. So quickly get that post up and post the link on the page! The earlier, the better. Happy blogging :)


Disclaimer in case you all decide to sue me: The iPad is not entirely new, it's partly second hand because I used it for a while before getting my new Motorola XOOM Tablet and it's a first gen iPad. And oh, there might be my name behind there but you can easily cover it with a case or sticker. Else, it's still in a pretty good condition :)
Labels: Competition