Networking is not for everyone 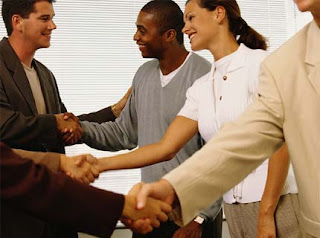 Network, network. That's one of the things that people keep telling me that it's very important to have because it helps to boost the readership to a blog. To have readers, a good way is to be friends with other bloggers first and then hope that friendship will translate into visits to your blog.
Although I do not deny the fact that having a network of bloggers as friends would be good way to keep my blog from collecting dust, I personally do not like this method to gain readership one bit. One of the reasons why I took up blogging is that I thought I don't have to meet up people. Everything can be done behind the keyboard, without having to crack your brains on a good opening line that you can deliver to people you have never met before at a networking session.
You might wonder what's the reason behind my dislike for networking sessions. You see, as singing isn't for everyone (take a look at shows like American Idol or X-Factor and you get the gist), networking isn't for everyone too. When you go to a networking session, you're expected to talk to people, crack jokes, appear interested and keep the conversation going, things that shy and introverted people like me fails miserably at doing (yes although Lukey is handsome, Lukey is terribly shy too). While people may gain new friends or acquaintances from networking sessions, I usually walk away with loads amount of awkwardness. And maybe added with an impression of being strange too.

Try as you might, you might not able to sing like Whitney Houston and Beyonce if your voice doesn't allow it. Hard work can bring you to a certain degree of success,but  sometimes it's what you're born with, your genes or talents as you might say, that brings you to the very top. And I definitely do not have the genes to socialize effectively.

Some people have asked me to step out of the comfort zone because you'll never achieve anything if you are just stuck in that one place for a long time. Occasionally, I have tried attending one or two events, tried to say hi to a few people but that's it. I do not actively seek out events to join because frankly, I can't even survive a tutorial group discussion after three years in NUS, what more a big event that requires me to walk up to a stranger and strike up a conversation. Big no no.

Besides, why put myself under enormous amount of stress and pressure? While some of us might enjoy meeting new people and actually having fun in the meantime, I don't. Every time I'm asked to go to know a new person, it's as someone is asking a Singaporean or a Malaysian footballer to play against Manchester United. He's just gonna embarrass himself in the end. So why the trouble?

Of course, I don't expect you to agree with me. On one hand, I do not deny the benefits of meeting new people and expanding your social network. Having the right connections could get you really far in life. I just don't like the way how networking session works. It feels that everyone is there for a reason, one that does not include having new friends. When they introduce themselves to you, they give you a card and along with that card, there's this expectation that you could help them or benefit them in some sort of way. I can't help but to feel that all these are superficial sometimes.

Also, the costs of trying to get to know strangers outweighs the benefits for me. If I could sum up the experience in one word, it would be traumatizing. I would worry about what to say, what others might react, my body language and a whole loads of other stuff. I've tried to be confident and act confident before but for all the times I tried, I ended up saying some really awkward stuff and makes people stare at you in a weird manner. You know all the weird pick up lines that you can find on the internet, like the old classic "Are you a broom? Because you've just swept me off my feet", half of those were invented by me during networking sessions.

So yeah, networking isn't for everyone. At least it's not for the shy, introverted ones who suck at socializing like me. It's not that I do not socialize at all and lock myself in the room the whole day, it's just that I choose not to do it if the reason is not compelling enough to put myself under all the stress and pressure. If my grades depend on it, then I'll try to make the best out of it, no matter how weird I sound during the process. I just try not to sound weird all the time, hence my preference of not talking if I have the choice. Besides, I have my blog to do the talking for me.
Labels: Personal Rantings