I Made A Choice 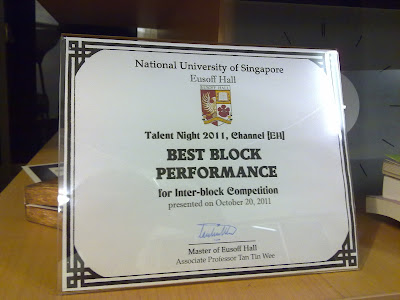 In the end, everything paid off. The late night practice, the constant script rewriting and the 10 thousand SMSes I sent, it all paid off when we went unto the stage. It wasn't the best performance ever but I'm glad that I chose to stick with what I have started to the very end and not giving up when I felt like it. It all freaking paid off. And when the emcee announced B Block as the champion for talent night once again, I couldn't help but breath a sigh of relief. From my own point of view, I thought that I have not done the best I could in organizing the entire thing and getting people passionate to contribute to the performance. But I was glad how everything sort of worked out in the end.
In a way, this entire experience has been a great teacher to me. It taught me that even at your lowest point in life, life (I prefer God) has its own unique way to turn things around, provided that you yourself do not give up first. I remember how friends cheered me on when I thought of giving up and becoming stressed over it. I remember that during the last night before the performance, when the pressure was at the highest point, how some of us guys chose to change the entire dance section at the last minute and practice it until 4am in the morning. Honestly, I was really touched by the willingness of the 5 guys to sacrifice their time for the practice. It was them, along with a few of the B3 girls who came to give us support and advice during our practice that motivated me to keep on pushing on.
This doesn't change the fact that I'm still gonna fail my exams tomorrow but I've made my choice when I chose to participate in the talent night. I knew what was I getting into and I can't blame anyone but myself (though I still f***ing hate the lecturer). And in a way, I think that I've learned more in this talent night experience than if I chose to focus on the exam instead. Not to mention that I have already half accepted the fact that I might be graduating early.
Oh well, what can I say, this semester is one of the worst for me.
Labels: Life Updates Rantings