A wise man (I forgot who he was, but he's definitely wise) once remarked that the key to success is to know yourself first before trying out on anything, blogging included. To be a successful blogger, you can't just keep on writing posts everyday and hope for the best to happen. Unless you're Angelina Jolie or Xiaxue, you have to know where you stand in the vast expanse of the blogosphere to be able to know what is the best move to make your blog a success and to plan what's your immediate and long term aim. I mean, you can't just expect to hit a few thousand visitors to your blog overnight when the only reader you have in your blog is your mum right?

Which is why I have been thinking for the past few days about where I truly stand in the midst of a few million bloggers in this world. People have been calling me a famous blogger for quite some time now, because of all the stuff that I won (ironically people who keep quoting that don't even read my blog) but from how I see it, I'm actually quite far from attaining the famous tag. Heck, I'm like a few million light years from it. And from my observation around the blogosphere (I've been observing for quite some time now), there's generally a few categories of famousity (if there's a word for it) that you can generally attach to bloggers. Perhaps after you see it, you wouldn't think that I'm famous after all.

And to give it a more official and scientific and complex name, I would call it the Lukey's Bloggers Tier theory. Just in case someone decides to do a journal review on this post. Just in case.

On the first tier, we have the (this might be a little no brainer but hey, why give fancy names to your category when no one will be using it in the first place?) the international celebrity bloggers. They are like the MNCs (Multi National Corporation) of the blogosphere. Like how almost everyone on Earth knows what is McDonald's, it's the same for them. One way to know if you're one of the First Tier Bloggers is to have perhaps a few thousand of visits per day from all around the world. That means you have Japanese, Americans, French, Chinese and Malaysians readers in your blog. And they comment a lot. Heck, there's even a forum discussion about you. A First Tier Blogger will frequently have their blogs featured on review websites like Technorati or even Mashable. They're like the Lady Gaga of the blogosphere. I can't think of any good examples to illustrate (clearly I have not been doing my research enough) but I think Rage Comics is one of the examples of a First Tier Blogger.

For the Second Tier Bloggers, you can equate them to being local celebrities of the blogosphere. They may not be known in the world wide world but they sure are famous in the country where they came from. They might have a few fans here and there around the world but their main fan base is in their home country. Don't look down on them though, they can still garner thousands of visits per day to their blog because they're still famous. They are the ones who will be stalked when they're out on the streets. Like I said, picture local film celebrities. A pretty good example would be Xiaxue (though I think she is between the First and Second Tier?) and Cheesie.

Slightly below the second tier bloggers you have the Third Tier Bloggers. Not as famous as the local celebrities but they still hold considerable influence around the blogosphere. They're are the ones whom you will find at blog events and they're the ones who companies love to hire for product reviews and anything commercial related because they're famous and comes at a cheaper rate than second tier bloggers. Third Tier Bloggers are generally more hardworking from what I see, because they need to maintain their readership and attempt to break into the second tier at the same time, and perhaps still waiting for the big break if I may add. Third Tier Bloggers are more bonded though, from my observation, because they tend to go to the same events together and they are more of them going around in the blogosphere. Visits to these blogs may range from a few hundred to few thousand per day. A good example is the group of bloggers under the Omy.sg wing that I usually bump into.

And next up you have the Fourth Tier Bloggers in which I belong to. In Malay, there's a phrase called Jaguh Kampung  (loosely translated into the village hero) which is taken to describe someone who is only famous in a small circle of people, namely close friends and the place where you work/study/live. You may be well known as a blogger inside your circle but outside your circle, you're relatively no one, hence the village hero tag. Bloggers here need considerably more work, more exposure and more talent to break into the upper tiers of the blogosphere. Bloggers here have between a few dozen to maybe few hundred (if your lucky) visits per day to their blogs. 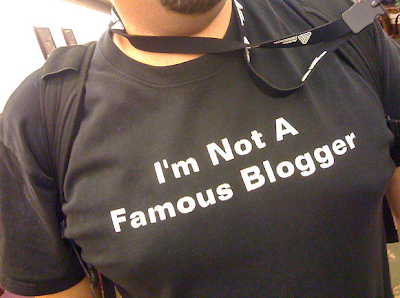 So yeah, as I've said, I'm no famous blogger, despite how some might think about me. This is because I've studied the amount of visits I have per day, the number of comments I receive per post and the amount of opportunities I got in the blogosphere. I've also compared my stats with some fellow bloggers that I know how famous they are relatively to see where I stand and no doubt I'm in the Fourth Tier in comparison.

That's not such a big thing though. Knowing where your blog stands is a good way to get started. You know what you need to work on and to have more realistic aims such as making all your friends know you first before aiming to make the whole world know you. And it definitely helps to keep your feet on the ground and stops you in engaging in any particular delusion that you're famous, especially important for a narcissistic blogger like me. So as a blogger where do you picture yourself at?
Labels: Blogging Rantings