Prior to watching Nasi Lemak 2.0, I've heard a lot about it. Not about the movie but more of the controversy surrounding it particularly. At first it was a video of him wanting to make a movie and how he couldn't because of all the associated red tape procedures, obstacles and stuff. Then came the story that he actually started shooting the movie. And before you knew it, Nasi Lemak 2.0 was born.
Being a fan of Namewee, the first thing that I wanted to do when I heard that his movie was out was to immediately fly back to Malaysia to catch the movie. The urge to watch the movie was even made stronger with all the hype surrounding it. There were people who called the movie racist while there were people who lauded Namewee as the Jack Neo of Malaysia. Which was why I immediately went to JB at the start of recess week. In case someone decides to ban the movie for god knows what reason. 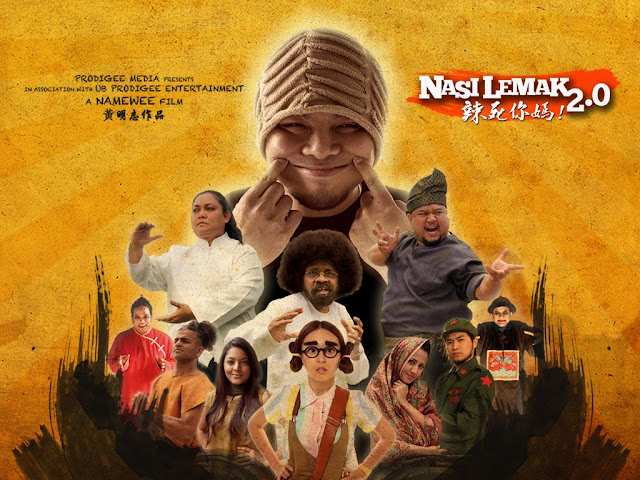 Before I start my review for the movie though, one can't help but admire the effort and willpower that went behind this movie. Although faced with numerous hardships and obstacles that would make most people throw in the towel, Namewee never thought of giving up. In fact, he soldiered on until his dream became reality today. Not only that, he also managed to assemble a star studded cast that included Malaysians famous comedians, singer and even Miss Malaysia. Not an easy task for a budding director surrounded by controversy like Namewee.
It is also worth noting that the entire film was shot using one DSLR camera. One and only one. A near impossible feat if you ask me because one have to make sure all the angles, composition and cinematography is correct when shooting. No matter what you think of Namewee, you have to give it to him for being such an die-hard fella.
Okay enough about the pre-production. On to the movie.
My general verdict for the movie is that it tries to achieve too many things simultaneously and end up being somewhere in average in most of the aspects (the idiom 'jack of all trade, master of none' comes to mind). From what I see, the movie tries to be funny, political, romantic, thrilling and touching all at the same time. Not to mention some Bollywood-ish and Hong Kong-ish essense too. And for you to cram all those things into a less than 2 hour movie, what you'll end up with is a badly mixed rojak with parts flying out here and there that doesn't make sense.
And for comments about this movie being racist, I can't help but agree that some part does touch on sensitive issue. The scene where he meets the Malay guy with four wives is for example. Besides, I kinda felt like the film is targeted mainly at Chinese audience because of a few references in the movie that touch on whether us Chinese Malaysians should support China or Malaysia. Also, there were references to Hong Kong movie too like the final battle scene that closely resembles one of Stephen Chow's movies.
But still, the cinematography of the movie is commendable. It gives of a vibrant feeling that sort of captures the Malaysian spirit which one can identify when watching the film. The nasi lemak stall, kampung and Rasa Sayang song makes me miss Malaysia in a way.
There are several plotlines that leaves good impression too. The one that involves the baba and nyonya is one for example. Too not give too much spoiler info, Namewee chose to make that plotline that closely resembles Jack Neo's comedy horror and I must say, he really did a great job there. There were times where I was really scared out of my wits.
The movie is funny too! There are a lot of great punchlines throughout the movie regarding about tons of stuff that we Malaysians can identify with that guarantees you would not be bored while watching the movie.
In short, Nasi Lemak 2.0 is a must watch movie. I would say that it marks a great start to Malaysian film industry. And I certainly hope that after this movie Namewee would be making more movies. A 7/10 from me.
Labels: Funny Malaysia Movies