"Instead of making the person you're chasing the honey, be the honey yourself and make them chase after you." 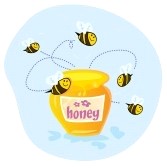 I came up with that quote while talking to a long ol friend of mine today when we were sitting by the seaside talking about relationships and girls. She was telling me about how girls would never like guys who are nice to them and would prefer guys who sort of play hard to get (putting a bit of bait, reel you in abit, then act cool, then put bait again; much like fishing, if you can imagine) and a host of other interesting stuff that makes you think that the world is kinda unfair.
Which is quite true exactly, given my recent experience.
You see, there's the naive belief among most of us guys that if you love the girl and if you want her to be your girlfriend, you should be nice to her. Which is pretty logical right? When you're nice to that person, you hope that the feeling would be reciprocated too. So you try to be there 24/7 with the girl, listen to her stories, message her to see how she's doing, buy her her favourite chocolates and all the small little actions that you hope will touch her heart and eventually make her like you too.
So essentially, you're making the girl your honey and you the bee. Wherever the honey go, you'll go. You cannot live without the honey. The honey takes a more important position than you in your life. What honey wants, the bee will do. All in the hopes that the honey will be touched by the actions of the tireless bee.
But sadly, from what I learned, this strategy rarely works out. The belief that the nicer you are to a girl, the higher your chances of successfully nailing her is plain bullshit. It should be that the nicer you are to a girl, the higher chance of you failing.
I've heard the reason "You're too nice to be my boyfriend" given a countless times to reject guys. Nice guys are never supposed to be boyfriends. Instead we are relegated to roles like "godbrother", "best friend" or any other term that suggests that you're close to the girl but not close enough to be her boyfriend. A comfort title, that's what I call it.
You see, us humans are what I like to call "fan jian" in Chinese (the closest translation would be evil I guess?). We never like things that come easily to us. Because by the end of the day, the things that we get easily without any effort will be taken for granted and will be of no significance. Now if we're required to spend a lot of effort to obtain something, we would come to treasure it more. It's human nature. The harder we work to obtain an object, the more we will treasure it.
Which applies directly to the fine guy case too. Because we made the girl our honey, because we are easily available, we would often be taken for granted and never be treasured.
The Casanovas know this principle. To successfully nail a girls heart, you must be the honey instead and make her come after you instead of going after her. Flirt with her, make her feel special, then stop there and withdraw. Make her feel your absence, play hard to get. Before you know it, the girl will be the one initiating the moves already. It's human psychology.
Sure, you can argue about ethics, about what is right, about being true to yourself, about principles but after being the nice guy for so many times and having the same ending over and over again, I had enough. What's the point of sticking to some stupid principles if all it gonna end up with is you being single forever with your principle?
So yeah, instead of making the girl your honey, caring over her, doing stuff for her, turn the entire thing the other way round instead. That is the way she's gonna notice and treasure you. That's the way you're gonna win her heart. If not, well, good luck on being her godbrother forever.
Labels: Love Matters Rantings