When the exams come, there is only one mood that you can have in NUS. And that is being all stressed out and all grumpy. Everywhere I turn, I see people who looked like they have not sleep or bath for a few days thanks to the constant revising that they are doing. You have people camping in the library for 24 hours, people drinking red bull and coffee as if it is water and people who would not touch anything besides their books. It seems like that if they fail this exam, the world would come to an end tomorrow.
It's as if the exams is EVERYTHING. It's either do or DIE. 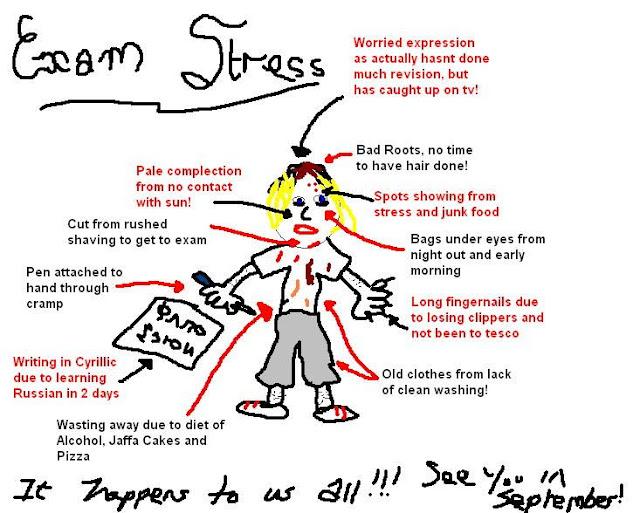 Which is kinda scary for a guy like me. When you have people all around you getting stressed out about the exams, you start to think that maybe you should start getting stressed out too. It's part of peer pressure, you see. The problem is that I just couldn't understand the enormous amount of stress that people have right now.
Before I go any further, I would like to clarify that stress before an exam is a normal thing. In fact, we do need a bit of stress sometimes to perform optimally. But the amount of stress that you see in NUS is definitely not the healthy amount. I mean people skipping sleep and downing Red Bull just to study? That is crazy man. Red bull can only carry you so far and when you're sleep deprived, nothing goes in actually so why bother?
I mean, why can't we all be happy, chill and optimistic when exams come? I'm not saying that we shouldn't revise at all, we should, but forsaking food, sleep and everything else in the process is not gonna help your case. It's dangerous. What's the point of studying 48 hours straight before the exam only to end up sick the day of the exam due to the lack of sleep? And if you have been putting enough effort all along, there's no such need to go overdrive in revising.
Well, maybe that all this pre-exam overstress is part of the culture here I guess. Especially when there is a bell curve involved. And also the kiasu spirit. When you see the person next to you studying, you start to panic that he will do better than you and so you try to put in more effort than him. And when the person see you studying harder than him, he starts to panic and redouble his effort and the cycle continues until you both reach the maximum effort that you all can put in, which is 24 hours a day.
Another thing that I have noticed is that we all tend to assume the worst whenever we all go for exam. Everyone is like "Oh shit I have not studied for anything" and "Oh shit I am so gonna fail the exam" and thus leading to the excessive studying behavior to curb the panic. And whaddaya know, they all get an A+ when the results come out.
Little did everyone know that if everyone takes it easy at the same time, the bell curve would come down but then again, we can't afford to take the risk right?
I guess I have to go buy a few cans of red bull now.
Subscribe to LUKEYisHandsome.com