My First Cheque from Blogging

Every hobby has its own defining moments. A dancer's defining moment is when you finally step up on the big stage for a performance while an actor's defining moment is when you lift up the Oscar you have just won from your movie.
A blogger has his/her defining moments too. One of it is when you first receive a cheque from blogging stating how much you earned from all the advertisements you have strewn across your blog hoping that someone would click them.
And I'm proud to say that after almost five years of typing, praying and pleading for people to visit my blog, my first official cheque came in the mail yesterday! It's kinda ironic how it came after I have gained so much stuff from blogging. I have always wanted the money only, being the money minded person I am, but still, it was a big day.
Looking at the cheque, it reminds me of a small boy many years ago who heard about this thing called blog from his friends. He had just got himself a Friendster account (see, I told you it was really long ago) and was experiencing the joys internet could give him, particularly letting him know girls at an alarming rate, and he was loving it.
But Friendster on its own is not enough though. Although it gave him the courage to approach girls and ask for phone numbers (which he did not dare to do in real life), he wanted more. He wanted a place which he can write and rant all day without the judging eyes of others. He wanted a place to pour out a feelings. He wanted the world to know what he was thinking. A friend then suggested blogging.
And so, at the age of 15, the little boy created his first blog on Frienster and naming "Jottings Of A Teenager". And like anyone would do, he blogged. 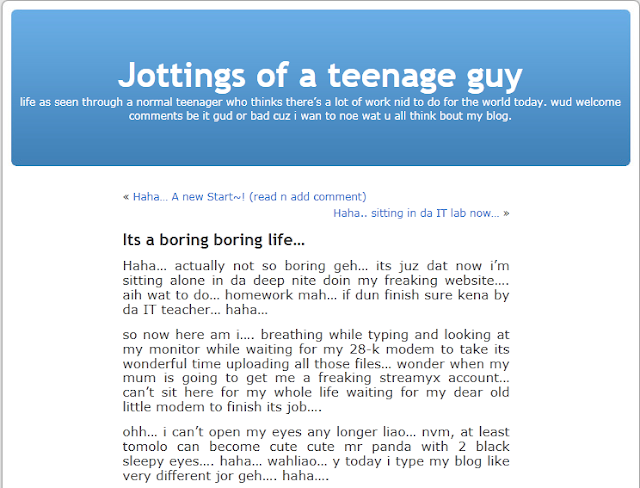 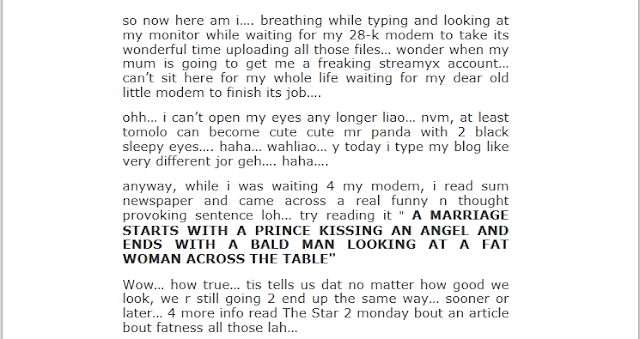 It's funny to see that even after all these years, I'm still practically the same guy who still thinks and blogs in the same lame and stupid way despite thinking how much I have changed over the years. Of course, my writing style has since changed quite a bit without the dot dot dot and the SMS shortcuts but overall I still tend to blog in the same way.
Looks like the Personality Psychologists were right all along.
Looking back, I remembered how I started the blog as a place to record down my daily happenings so my future me can look back and laugh at it (which is what I'm doing now) and then moving to be more serious, hoping to use my blog to change the world or sorts (those success stories really helped influence me) and now I just use my blog to get myself famous and win loads of free stuff.
Maybe something did change.
But it's good though, to look back at your past and reminiscence about it. It sort of show you how long you have journeyed in life and what has changed and what has not. Sometimes life just zooms past so quickly that you have lost touch of what really happened and what's really important. Which is why you have blogs for that.

I guess this marks another milestone in my life. Maybe I will reminiscence again when I earn my first 1000 dollars from blogging but til then, you can read my once upon a time blog here:
http://happycherhong.blog.friendster.com
Labels: Blogging Life Updates Rantings