I think I should stop brushing my teeth too

When I first saw her, I thought she was attractive and cute. Pretty too. And she has such a nice name, Ji Hyun Ji. Best of all, she's only 20! My ideal girlfriend candidate. 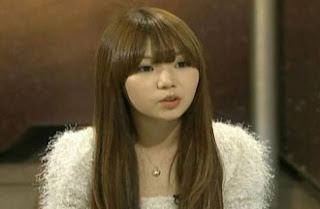 Until she told me that her secret. One that is far worse than having 5 ex-boyfriends before because according to her, she has not brushed her teeth for more than ten years already. Ten years! And I thought I was bad enough for skipping my teeth brushing routine for one week when I forgot to bring my toothbrush to a camp last time.
Appearing on one of South Korean shows called Martian Virus just recently,this girl with the nickname Cutey Yellowish (I wonder if it's referring to the teeth or her skin) claims the last time she brushed her teeth was when her mother helped her to. Spoiled brat eh?
And she said that she doesn't see any point of her brushing her teeth because she claims that "as food scraps pile on, they will actually protect" her teeth. And I thought toothpaste were supposed to do the job. Or is that just a lazy explanation? However, she did add on that she does wipes her teeth with tissue on special occasions.
Like it or not, her story is already spreading like wildfire online because if what she claims is true, you'll soon have toothbrush and toothpaste company going bankrupt because why waste money to protect your teeth when they can protect themselves? And she certainly redefined what is hygienic and what is not for me.
One thing is for certain though, she's one girl that I definitely would not want to kiss.
Labels: Online World Personalities Rantings