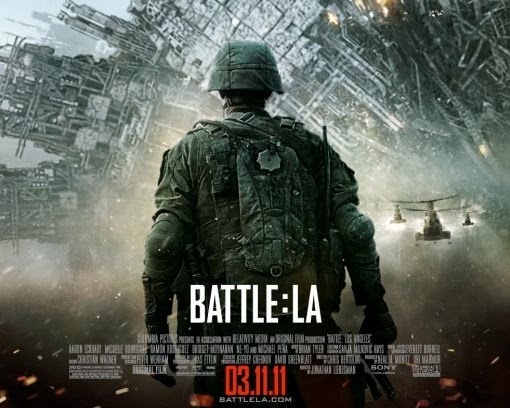 I had my reservations prior to watching this movie. After all, for a movie to get a mere 34% rating at Rotten Tomatoes with 57% audience enjoying it, it must be quite bad indeed. But after listening to some friend's comment that it's a nice movie, I have decided to watch it without holding any expectations in me. It turns out that the people that do not like this film must not have played Call Of Duty: Modern Warfare (COD) before, because the movie looks exactly like it.
Overall, I must say that the movie feels exactly like a typical war video game that nerds like me would play nowadays, complete with all the oh-so-expected cliches.
For starters, you have the shaky camera feel. I'm guessing that the directors did that on purpose to give the realistic feeling as though you are there itself running together with the marines. Like how your screen would shake when you sprint in COD. Either that or the directors have not enough budget to buy a stabilizer for their cameras or they hired a dang shitty camera crew.
People like me who constantly fight bad guys in video games are used to the camera style but for others, it will get dizzy after a while. And definitely not enjoyable.
Secondly, I can't help but feel as if that I am watching a video game playthrough throughout the movie. You have the usual missions with the ever changing objectives and cliches like the helicopter getting shot out from the sky all of a sudden throughout the movie. It's like COD too. You're given an objective, you set out to achieve it, your objective gets changed due to some reasons because you discovered something important along the way and you have another objective to achieve after that until you finish that part of the mission.
And thirdly is how the aliens got defeated in the end. It always have to be that one universal flaw that the aliens forgot about. One that can bring the entire alien army down in just one shot. Why can't it be a series of events that eventually triggered the alien's defeat? So cliche.
But overall I still like the movie because I can relate to the soldiers fighting the aliens. It's as if I am there myself shooting those octopus alien off. And throughout the movie I was wondering if there's a video game for this because the whole movie makes me feel this way.
Turns out that there is one made by Konami here:
And suddenly the movie just felt like a 2 hour long trailer for the game.
Labels: Gaming Movies Rantings