And so our dear friend proposed to Rebecca Black

Today was off to a great start. The weather is great, I've just gotten my first Nuffnang cheque, there's no class to attend and best of all, it's Friday! (Rebecca Black's song start playing in the background)
Nothing can ruin my day today, I thought. Until I logged into Twitter and saw my friends sharing a video about someone proposing to Rebecca Black. Out of curiosity, I clicked it. And that's how my day got ruined. Because the guy turns out to be Steven Lim.
If there's a Fear Factor show in Singapore, Steven Lim's song could make a great contribution to the show. Participants have to compete among each other to see how long they can last hearing his music and watching his video. Because I know I can't. Halfway through his music I'm already foaming at the mouth already. 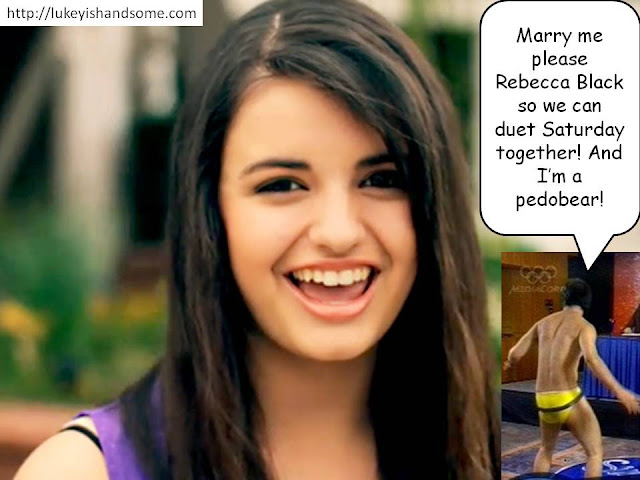 Yeap, so there you have it, our dear friend Steven Lim proposed to Rebecca Black on Youtube. A 35 year old guy proposed to a 13 year old girl which begs the question, Why on Earth did he do it?
Perhaps it's a publicity stunt. Maybe he's hoping that by proposing to someone as famous as Rebecca Black and throw in music that is worse than her, it will get picked up by some newspaper or someone famous enough to propel him to freedom. The best way to get famous is to ride on others popularity after all, like what I'm doing now by blogging about this topic. My theory is that he knows perfectly what he is doing, he doesn't care if he looks like an idiot as long as he's getting hits on his website and generating tons of money from there.
Or you could just say he's plain sick. If I'm allowed to make a guess from all my hours reading Psychological textbooks, he seems to be suffering from what psychologists would call a narcissistic personality disorder. He displays all the classical symptoms after all. A super inflated sense of ego that seems to think that he is the greatest and the inability to digest criticisms coming from others. And no matter what negative comments you throw at him, he can't get it. Don't even bother about sarcasm.
Or the final explanation would be that he's just too free or to put it in a local context, bo liao. He just has too many free time on his hands to be doing something useful so instead he chooses to make loads of music videos in attempt to get himself famous like how Rebecca Black did. All he need now is just one lucky break and that's it.
Either way, Steven Lim is still an interesting guy, despite how people seem to look down or criticize him because like it or not, you have to admit that he is different. Not entirely in a good way but his ability to ignore negative comments and persevere in what he is doing. Not many can do that though, although this may be due to the psychological disorder that I mentioned earlier.
Besides, it would be interesting to see where this latest video of his would bring him to.
If it gets picked up by someone big in the US, perhaps he will then get the fame that he has always wanted, although not in a very good way. And if it's not, then it will soon be forgotten after being ridiculed by the rest of Singaporeans like the rest of the videos.
As for me, I think I'll just go back to studying for now.
Labels: Online World Personalities Psychology Singapore