Why All Guys Want A Girlfriend

As a Psychology major, I find myself in a constant search for answers of human behaviors I see around me. One of it would be the constant need for guys to have a girlfriend. Not all of us, but most. Myself included. 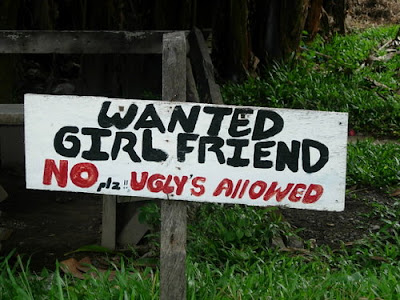 Throw any single guy to mix with any decent enough single girl and the next thing you'll know would be the single guy weighing the options of whether he should chase her or not. That's the single most popular reason of why guys would want to know a girl in the first place. There's no such thing as a guy really wanting to be your friend when he ask you whether he can be your friend or not.
When a guy asks you whether he can be friends with you, deep down in his heart he's thinking about making you his girlfriend the moment you say yes.
Trust me. I'm a guy. I know.
But why actually? Why are us guys so desperate to look for a girlfriend? Why can't we just live happily ever after alone?
There's a few theories that I can think of. It's not scientifically supported but well, who said blog posts needed to be scientific? Among the few reasons why all guys want a girlfriend includes:
1. To Satisfy Their Need For Sex
Noticed how every guy wants to screw their girlfriend after they get attached? The sooner the better too. And if the girlfriend refuses to give them sex, they would go on and on about how the girlfriend doesn't love them and stuff.
To them, a girlfriend is never a girlfriend until both of them have made "passionate" love together. We have Hollywood to thank for this.
2. Life would suck without one
Disney said that to live happily ever after, we need to find a "princess" and get married. So it wouldn't be surprising for us to think that life wouldn't end happily without a girlfriend by our side when we grow up since we have this message hammered into us from young.
3. Because the guy next to me has one
We guys are jealous creatures. We like to compare and compete to be the best. If you have an iPhone, I would want an iPhone too. If you're driving a Ferrari, I would buy one tomorrow immediately. And if you have a girlfriend, of course I would also want one.
4. Companionship?
Yeah we get lonely sometimes. We need people to talk to and agree with our viewpoints sometimes too. And we definitely can't afford to grow old alone right?
5. Free maid
Girlfriends come with skills that we guys are genetically incapable to have. Skills like washing our clothes, cooking good food and taking good care of ourselves. Only a girlfriend can do that with perfection. We can't.
6. Love?
And of course, maybe it's because we love you and can't live without you. Reason being that without you, we would be missing on the 5 big enjoyments of life listed above.
So would you be my girlfriend?
******
Disclaimer: This post is intended as a joke and is no way supported by any theories, studies or scientific evaluation. And let me clarify that this post does not in anyway represents how most of us guys think. But if you still want to take offense, go ahead and be my guest.