Tasteless and ignorant, that's what you are

It was already bad enough for the Americans to say that the devastating earthquake that hit Japan was a result of karma. Japan, after all, was the idiot country that bombed their Pearl Harbor more than 70 years ago and it was payback time, according to these selfish people (read their Tweets here).
Hello, that was more than 70 years ago okay? And it was not the normal Japanese citizens that ordered the attack on Pearl Harbor and even if they did, they would be probably dead by now. How many people did you lose anyway as compared to this earthquake? And did you happen to forget that the two atomic bombs dropped by America caused much more casualties as compared to the mere attack on Pearl Harbor? Even if it's karma, it happened a long time ago when those two bombs fell.
I was already disgusted enough by reading all those selfish tweets. But who knew us Malaysians, with our over ever competitive spirit could do so much better at making distasteful comments?
First, it was the cartoon that came out on one of Malaysia's most read newspaper and also the newspaper owned by the ruling party in Malaysia, Berita Harian that depicted Ultraman running away from a tsunami. 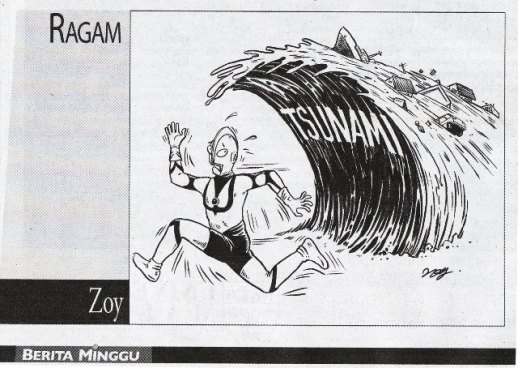 Freedom of speech is one thing, but poking fun at a natural disaster that caused so much despair and loss of life? I am very interested to see if the cartoonist, Zoy, would still have the mood to be funny if he had just lost all his belongings to an accident.
And it also happened that our first lady of Malaysia, Rosmah Mansor, seem to think that the cartoon itself was not bad enough and decided to further rub salt to the wound. This is what she said on live television. I repeat, live television broadcasted to the entire Malaysia.
If you happened to not understand Malay, basically this is what our supposed prime minister's wife have to say about the disaster that hit Japan.
According to her, the 8.9 magnitude quake that hit Japan should be taken as a lesson for other countries that no matter what they do or if they want to undergo any development, they must first take into consideration of the "climate change" and also use "green technology" so that disasters like this would not happen anymore.
If you are already screaming "WTF?" at her comments and wonder whether did she left her brain somewhere else, you are not alone.
I mean, what the hell has green technology to do with stopping an 8.9 magnitude quake and the resulting tsunami? Is she saying that by being green, like if we recycle our products, we would not have natural disasters coming at us? I think someone has been watching way too much doomsday movies like 2012, The Day After Tomorrow or The Core because that is the only way one could come up with such a ridiculous theory about how this could be a lesson for us to use "green technology".
Japan, as far as I know, is one and perhaps the most prepared country technologically and also mentally in facing natural disasters like this. They are the ones who came up with the word tsunami after all. And they practice almost every month for disasters like this. There are even earthquake kits sold in stores. If this quake were to hit Malaysia, god knows what will happen. I bet our Petronas Twin Towers and KL Tower cannot even sustain one minute of it and would come crumbling down like Lego.
If you have no idea how bad the earthquake and tsunami looked, Google for the video. But here's one to give you a general idea.
After watching that, do you still think our made in Malaysia buildings can withstand that?
I could so see the headlines tomorrow. "Use green technology or else an 8.9 earthquake would happen to you, says the wife of the  Prime Minister of Malaysia".
Malaysia media, as usual, was fast to block out her comments regarding that how this should be a "lesson" for Japan and only reported the part where she expressed her sympathy.

Smart move, but the damage has been done, thanks to the internet.
That's two embarrassing incidents that were truly Malaysian made in two days regarding the Japan's quake. First the cartoon and then the comments made by our dear First Lady. She should have just stuck with singing songs rather than try to say something intellectual. Because if all you do is just to watch movies like 2012, you wouldn't sound very smart when it comes to analyzing real world situation.
Trust us Malaysians to sound stupid and make headlines everywhere for all the wrong reasons. Even the Americans lost to us on this one.
And I wonder what Najib will say to this. He has lots of explaining to do.
Labels: Malaysia Politics World