Every great story that has been ever told has a great ending of its own. That's what makes it a great story. Cinderella lived happily ever after, Voldemort got slayed in the most awesome manner possible and Po became the legendary dragon warrior and defeated Tai Lung in Kung Fu Panda.
And like all great stories ever told, The SDD Vol. 2 Adventures of DoriLukey must also come to an end too. And like all the great stories ever told, the ending must be an awesome one, so this is gonna be an awesome post to read! I hope.

Firstly, I must say that being a part of the Top 10 Finalist bloggers for the Singapore Dance Delight have been a truly awesome (how many times have I used this word?) for someone like me. Unlike other bloggers, I am still relatively quite new in the Singapore blogging arena, only started to get serious when I first came here in 2009, and I can't even hit a decent amount of visitors per month as compared to much more established blogs out there.

In fact, my blog has the ability collect dust whenever I don't touch it but that's another matter.

Despite this, I was still chosen as one of the Top 10 by the, wait for it..., awesome sponsor for this competition F&N Sparkling Drinks and OMY.sg. They have been a great bunch of people to work with. So different from the horror stories that I used to hear about how companies abuse bloggers like making them dance 10 times to be selected as an official blogger.

And furthermore, I also got to meet 9 other equally amazing bloggers through this experience. I had loads of laughs with them and I certainly hope that our paths would cross again.

Okay, enough of the emo-ing and reflections for now, the competition hasn't quite exactly ended yet because they have yet to announce the results so I'm gonna save the emo-ing for later in case I did not win anything. Just kidding.

Anyways, for this competition, I have written it in such a way that it would like some some epic story that you would normally see in TV. Just to keep things interesting and what I've written below is a rough guide and links to all my past posts in a chronological manner. Just to serve as a guide for you all and of course, the handsome and pretty judges :)

Ladies and gentleman, The SDD Vol. 2 Adventures of DoriLukey:

My first entry for the competition: http://www.lukeyishandsome.com/2011/02/singapore-dance-delight-sdd-vol-02.html

Episode 1, Once Upon A Time: http://www.lukeyishandsome.com/2011/03/once-upon-time-in-land-far-far-away.html

Episode 8, Final Chapter: What are you viewing now

Well, that takes care the idea of having all the posts in the same place. And of not forgetting my precious baby from this competition, the Finals Summary Video:

Don't look down on it k? It took me a painstakingly 10 hours+ to come up with something like that, shooting and capturing not included. Perhaps I should get an Oscar for that.

But anyways, it has been a fun ride. Opened my eyes to the much bigger blogging scene that is happening around Singapore and thanks to this competition, you'll be definitely seeing me appear in other competitions in the future so if you want my autograph, better say it out now! :p

To end off our post today, I shall include a picture to summarize how my entire journey felt. And like they say, the picture will talk: 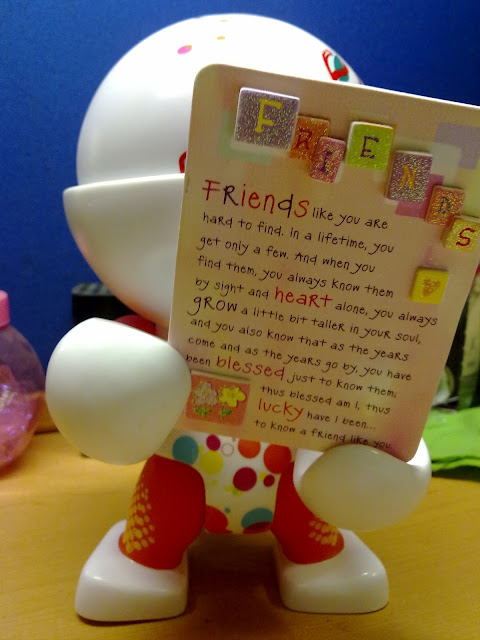 It's the Trexi that was given to us bloggers by F&N as a Top 10 prize and it's holding a board that talks about friends. And yeap, I think this picture neatly summarizes my feelings. Adios.

(I do hope I'll get that HTC Wildfire though as a consolation prize :p)
*****

The post is proudly brought to you by F&N Sparkling Drinks (http://www.facebook.com/FnNFuN and http://twitter.com/#!/FnNFun). Do check out their page because they have constant updates and contests! And do check out Lukey's (the handsome guy behind this post) blog too at http://lukeyishandsome.com  and if you have Twitter you can also listen to his constant rants in his Twitter account. And lastly, Lukey has a small favor to ask you if you enjoyed reading this post. He would greatly appreciate it if you would spend a little time to like his photo at F&N's Facebook page here (you might need to like F&N first to be able to vote) so he could fulfill his dream of traveling to a country outside of Southeast Asia. Many thanks and have a nice day!
Labels: Blogging Competition Rantings