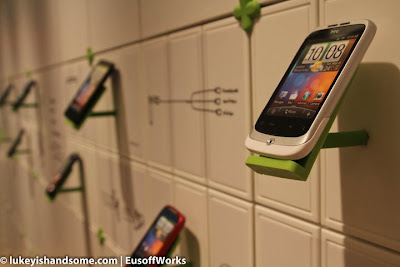 Every hero needs a trusty weapon that he could always count on by his side. Green Lantern have his ring, Thor his hammer and Captain America his shield. Ichigo from Bleach has his Zangetsu and Sawada Tsunayoshi from Hitman Rebornhas the Vongola gloves. Together with their weapons, they would battle whatever injustice of the day and achieve the impossible.
And like any other heroes you would normally see, Lukey the handsome blogger would also need one in his quest to become Singapore Dance Delight Vol. 2's grooviest blogger and finally achieve his dreams of becoming a famous blogger.
Well, there is however, one tiny problem. Lukey is not exactly the richest blogger ever. Where others have awesome phones, awesome DSLR cameras and awesome computers to help in their blogging, all Lukey has is just his awesome looks. But that does not help anything when you have empty pockets. 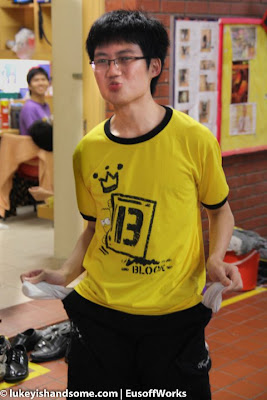 Thankfully, just as when Lukey thought all hope was lost, two kind souls in the form of F&N and HTC decided to bestow Lukey with an incredible secret weapon to help him in his SDD journey.
And it was none other than the smart and cute phone, HTC Wildfire! And it comes in three colors! 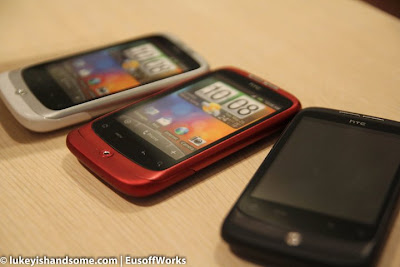 But then again another problem soon appeared as soon as Lukey got the phone. You see, aside from having empty pockets, Lukey has empty brains too. Like they say, good looking people have them emptiest brains ever most of the time. 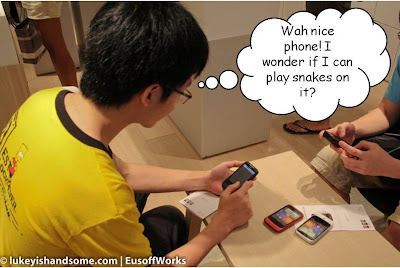 It turns out that to use a smart phone correctly, you first have to be smart yourself.
And thankfully yet again, F&N decided to help out by sending Lukey to train and master the use of his new HTC Wildfire at the HTC concept store located at Nex, Serangoon. And it also gave him a handsome tutor to guide him through the process!
Through his short training in the HTC concept store under his 'sifu' Lukey quickly mastered the arts of the smart phones, learning about the unique HTC Sense user interface that is built unto many Android powered HTC phones like Wildfire and the various specialties of it.
For example, there's the polite ring function that detects and adjusts the ring volume accordingly, it rings louder when it's in your pocket but softer as you pick it up, which is perfect to avoid any awkward moments of people staring at you because of your phone's excessively loud ringing.
There's also the people based approach where your phone is not organized according to the different apps or functions like messages but rather your contacts in it. Select any contact and you'll see instantly the relationship between you and your contact like the messages he/she sent you, the calls made between you too and stuff like that. And if you happen to link your contacts with their Facebook account, you could also see their Facebook status too on the user id when they call you. Cool right?
And before long, Lukey is already tweeting, surfing the web and blogging through his phone like a master thanks to the teachings of his master and also the excellent guide that was provided to him, http://discoverhtc.com. Better still, Lukey is now officially able to use the social media like never before using his HTC Wildfire. And he's never been happier thanks to his phone! 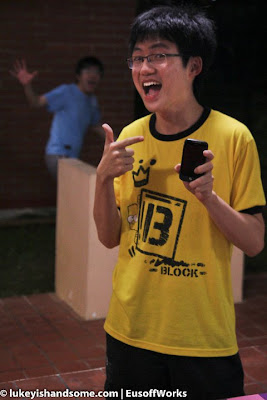 And so, with his new weapon in hand, Lukey marches off for his final lap in his SDD journey where he hopes to be crowned as F&N's best blogger ever in conjunction with Singapore Dance Delight. You better watch out for Lukey though, he is not a blogger to be reckoned with because like the HTC slogan, he's quietly brilliant. And quietly handsome too! 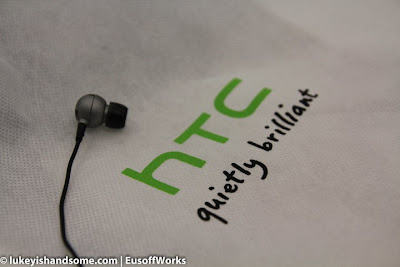 Together with his trusty Wildfire, Lukey will spread like the Wildfire and conquer the world!
Okay, that's a bit too much and lame but who say you cannot feel great with such an awesome phone. And off Lukey goes! Lukey for the F&N and HTC!
*****


The post is proudly brought to you by F&N Sparkling Drinks (http://www.facebook.com/FnNFuN and http://twitter.com/#!/FnNFun). Do check out their page because they have constant updates and contests! And do check out Lukey's (the handsome guy behind this post) blog too at http://lukeyishandsome.com  and if you have Twitter you can also listen to his constant rants in his Twitter account. And lastly, Lukey has a small favor to ask you if you enjoyed reading this post. He would greatly appreciate it if you would spend a little time to like his photo at F&N's Facebook page here (you might need to like F&N first to be able to vote) so he could fulfill his dream of traveling to a country outside of Southeast Asia. Many thanks and have a nice day!
Labels: Blogging Competition