For today's post Lukey is gonna talk about another fantastic team competing in Singapore Dance Delight Vol. 2. And he is not gonna use the third person perspective anymore in this post. It gets kinda boring after a while. But the adventure stays! So you will still ranting about this journey to obtain the two legendary Osaka tickets given out by F&N every one year during the SDD competition while having to compete with 9 other bloggers. It is not going to be an easy journey but what's a good adventure story without intense and heart stopping competition, right?
Anyways, back to the topic of the day, BOTS (Born Out To Swag)!

They say that each a handsome blogger's quest to be the best SDD blogger would not be complete without having to undergo intense trials and tribulations. It would not be fun if the competition is like a stroll in the park for you. Which was exactly what I faced when I was tasked to cover BOTS for the competition. Approaching deadlines, mid-term exams, never ending dance practices of my own and conflicting schedules with BOTS were among the challenges I had to face when I wanted to go down to cover them.

I had almost wanted to give up amidst all the stress but in the end everything turned out to be a blessing in disguise. It was through this experience that I found out that although they have their own busy schedule to keep, they are quite a friendly bunch of dancers who is humble and down to earth. And although I did not manage to meet them in person, I did manage to talk to them through a really special method. Through a handphone while sitting in the bus!


Perhaps one of the" youngest" team competing in SDD 02, BOTS was just formed only two months ago in January 2011. Which meant that most of them have very little experience of dancing together as compared to the other more established groups in SDD 02. This was not a obstacle to them though, as proven through their superb performance during the prelims. You can check out their prelims item here:

Comprising of eleven members, of which seven is taking part in SDD 02, namely Ben, Bao Wen, Alvin, Alif, Daryl, Lester and Dan (the leader), BOTS showcases a unique style of dance called swagging that is not entirely hip hop but rather emphasizes on the attitude when they are dancing. According to Dan, the group hopes to bring out a completely fresh and new flavor in the competition with their style of dancing. Through this style of theirs, BOTS hopes that the audience would be be thrilled by their performance and come to like this style of theirs.

Although the group is relatively new, the dancers under BOTS are already well established dancers that hails from NRA (New Revolving Age), one of Singapore's quite famous dance clubs that is based in Ngee Ann polytechnic. They have known each other from quite some time already but SDD 02 would be the first competition that they join together as BOTS. So don't look down on them! 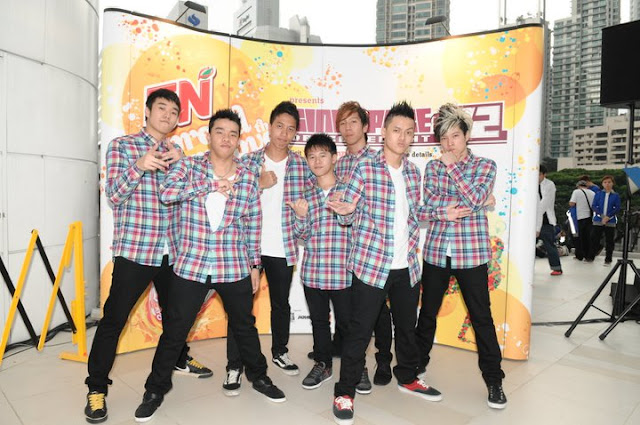 All in all, I think BOTS is a great team. Not only they have neat moves and awesome dance skills, they are people with a big heart. Even though I did not have the chance to go down to cover their practices personally, they were still really friendly when I called them, going so far to crowd around the phone which is one loudspeaker to hear the conversation between me and Dan and to join in with jokes and laughter.

Aside from that, they also went through the trouble to take a picture and send it to me just for the purpose of this blog post. So ladies a gentleman, a sneak peak of BOTS, courtesy of all of them!

And I would also like to say that BOTS is now one of my favorite groups to win SDD now too!


The post is proudly brought to you by F&N Sparkling Drinks (http://www.facebook.com/FnNFuN and http://twitter.com/#!/FnNFun). Do check out their page because they have constant updates and contests! And do check out Lukey's (the handsome guy behind this post) blog too at http://lukeyishandsome.com  and if you have Twitter you can also listen to his constant rants in his Twitter account. And lastly, Lukey has a small favor to ask you if you enjoyed reading this post. He would greatly appreciate it if you would spend a little time to like his photo at F&N's Facebook page here (you might need to like F&N first to be able to vote) so he could fulfill his dream of traveling to a country outside of Southeast Asia. Many thanks and have a nice day!
Labels: Blogging Competition Happenings