Which brings us to the main topic for today's post.

Remember about the Taeyang Dance Class competition that I blogged about a while back? The one that was held in conjunction with the Singapore Dance Delight Vol. 02 (SDD2) competition in which 15 lucky winners will have the opportunity to win a six-week dance class to learn Taeyang's awesome wedding dress at O School by posting shoutouts to their favorite finalists teams.

Turns out that two of my close friends were actually lucky enough to be selected as the winners, thanks to F&N. Must have been because some of my luck have rubbed off on them. Just joking.

Oh, and before I forget, let me introduce to you my two lucky friends, 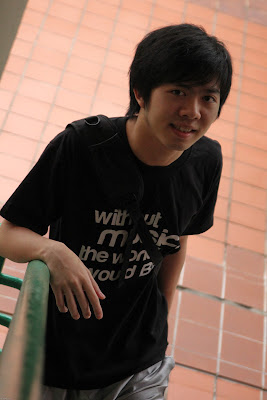 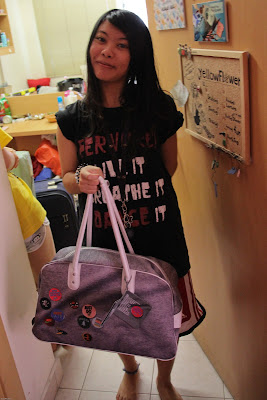 Anyway, they have been telling me since the first time they went for the lesson about how fun the entire class was and have been asking me why I did not join the contest in the first place even though I have an entire blog post dedicated to it.

Being the skeptical guy I was, I decided to tag along with them for one day and see for myself whether the dance class was as fun as they said it would be.

So off we go to O School! 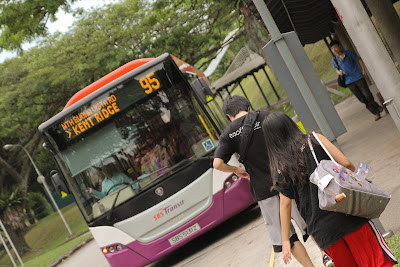 Okay, I'm pretty lazy to type already after boarding the bus so for the next few minutes I'll just let the pictures do the talking while I go grab something to eat. Bwahahaha.

O School, SCAPE. One of the best dance schools around in Singapore 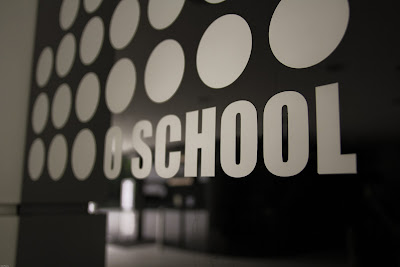 Singapore's version of The Thinker statue. (Stoning while waiting for the class to start) 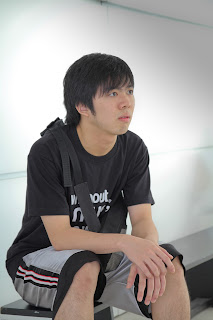 That's me on the right by the way, trying to see if there's a Wifi signal I can coop to tweet about how happy I am to be able to see the Wedding Dress choreo. Turns out there's none :( 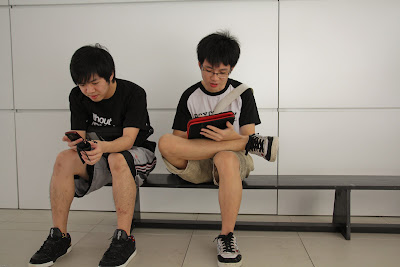 The awesomely big studio where the practice takes place. Even bigger than my whole house combined. 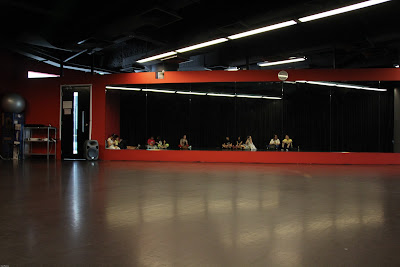 I call this masterpiece of art The Shoes On The Dance Floor. Actually the photo was taken by Huang Hua. But since I'm the photographer for the day, all the photos that were taken on the day will be mine! *Evil Laughter* 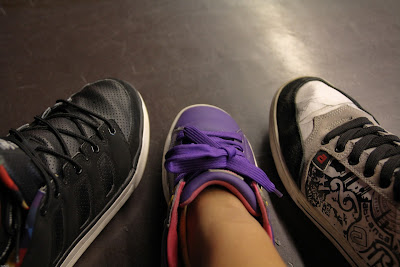 "Isn't Luke just handsome for helping us take this picture?". Okay she didn't say that. They were to busy to notice me taking photos anyway. 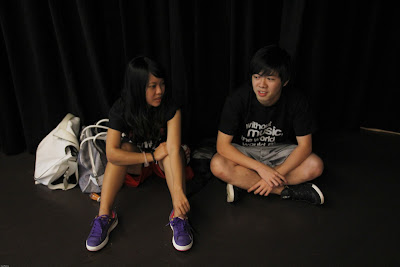 Our choreographer for the day, Zaihar! He's quite famous in the Singapore dance scene according to all my dance friends. Lucky Xian You and Huang Hua. 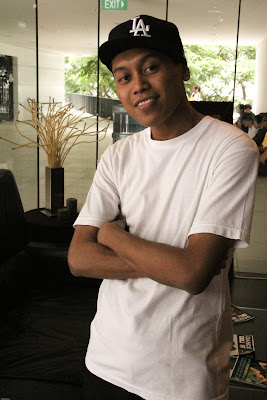 Sadly, I did not take any photos during the dance practice session because it wouldn't be good to have a handsome photographer walking around with a camera when you're practicing your steps. You would be too distracted with the handsome photographer, I mean the camera to pay attention to what the instructor is teaching in front. And besides, there were also members of the public other than the 15 winners who were enrolled in the class so I decided to roam around and take some photos while waiting for the class to end. 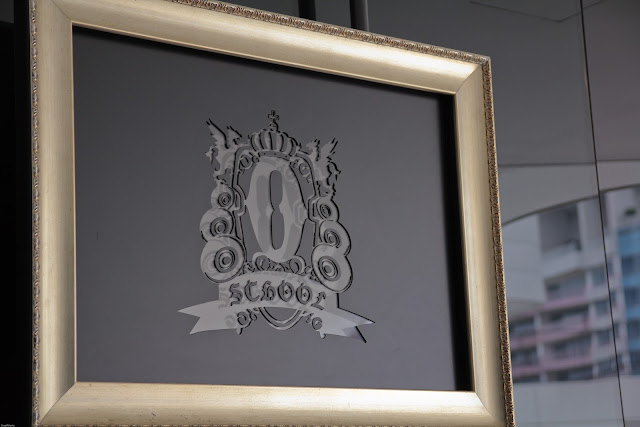 I don't know about you guys but the design vaguely reminds me of another similar emblem that looks something like this: 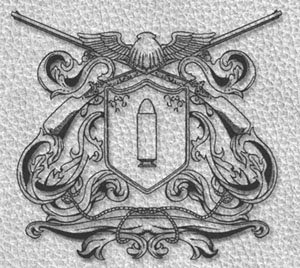 Similar right? I bet the person who designed O School's emblem is a big fan of Japanese anime because the bottom emblem was from one of my all time favorite anime, Hitman Reborn!

Or maybe I'm just too addicted to animes that I can seem to draw links to them from anywhere. *Slaps Myself* No more anime fever!

Anyways, before I knew it, the one hour has quickly passed by as I was admiring that cool emblem of O School's. And as the "blogger" covering the event, of course I have some special rights. Like ordering the 15 winners to pose for a picture for my blog. 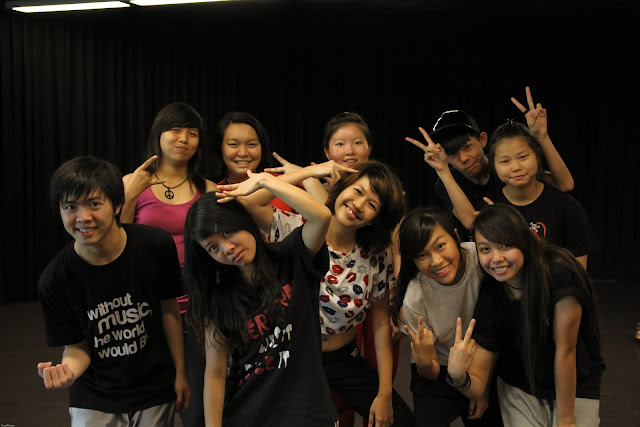 I know, that's a blatant abuse of power right. Which explains why there were only 10 of the winners who were willing to pose for the photo for me. 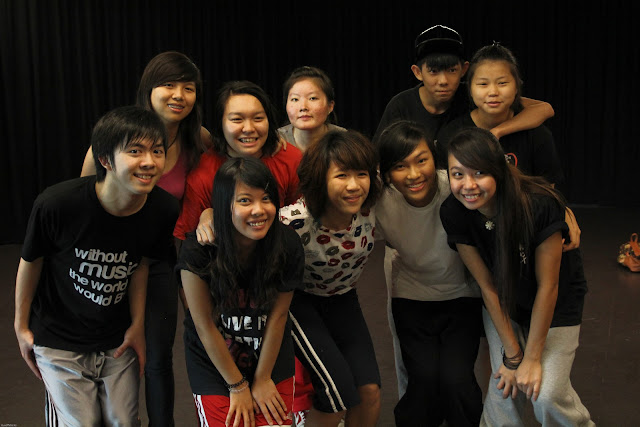 The other five was standing behind me with a big rock over my head.

And now that the dance class has finished, it would be good to revise the steps before you forget right? And what better place to do it than a DDR machine located just one floor below O School? 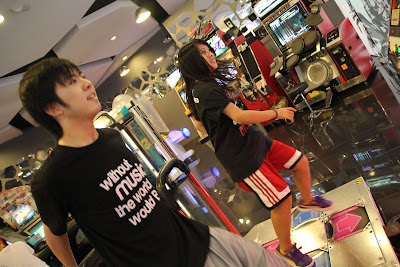 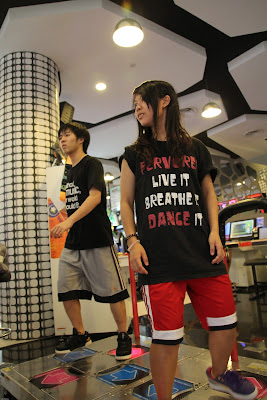 Boy, all those dancing sure got us really hungry and tired, I must say. Lunch time! 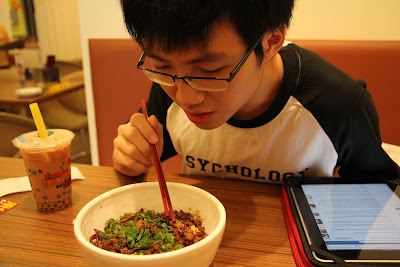 Typical social media addict plus blogger. Eat also must have iPad next to him. Tsk tsk tsk

And thus with a full stomach today's post will end. Of course, not forgetting to thank the wonderful sponsors F&N sparkling drinks for giving me and my friends this awesome chance to experience new awesome things (free too!) together with O School. 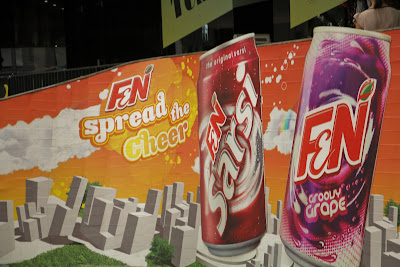 Spread the cheer yo!

And to end off today's post, we're gonna have the two winners and the main characters for today to do a jumping shot. Lets JUMP 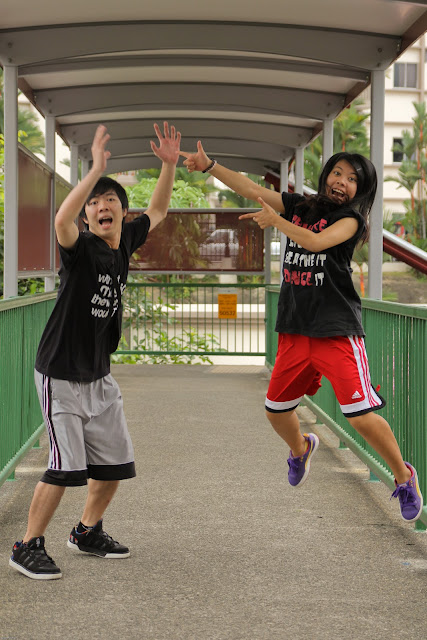 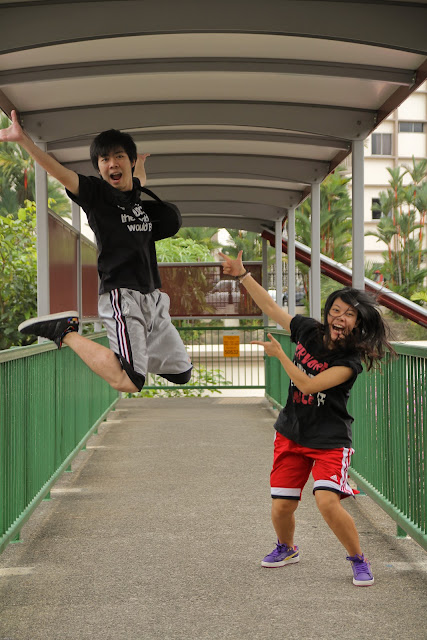 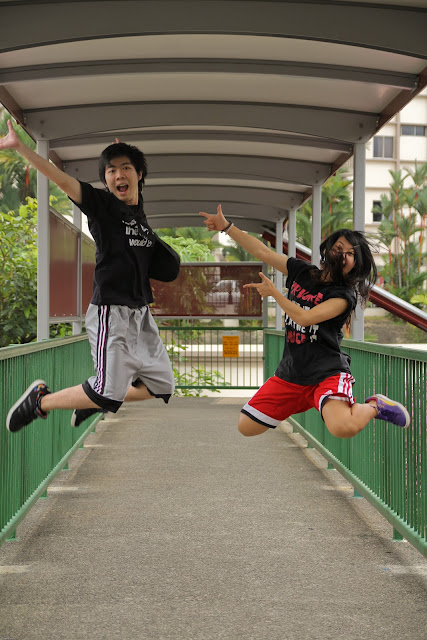 And don't jump off your beds while sleeping!


The post is proudly brought to you by F&N Sparkling Drinks (http://www.facebook.com/FnNFuN and http://twitter.com/#!/FnNFun). Do check out their page because they have constant updates and contests! And do check out Lukey's (the handsome guy behind this post) blog too at http://lukeyishandsome.com  and if you have Twitter you can also listen to his constant rants in his Twitter account. And lastly, Lukey has a small favor to ask you if you enjoyed reading this post. He would greatly appreciate it if you would spend a little time to like his photo at F&N's Facebook page here (you might need to like F&N first to be able to vote) so he could fulfill his dream of traveling to a country outside of Southeast Asia. Many thanks and have a nice day!
Labels: Blogging Competition Pictures